I’m good little backup-er. I follow all of your instructions and happily use Macrium for regular image and file folder backups. Recently, the video system on my aging PC died and I decided to buy a new PC. I thought I could easily restore the image backup to my new PC, thereby saving me hours of reinstalling my software. But no, I can only restore an image to the same sort of hard disk on the same PC. What a waste! Surely most people will want to replace their whole PC when they have a failure that requires them to think about restoring an image. How many people, and in what circumstances, find an image backup has been a lifesaver?

I understand your frustration, but restoring an old backup to a new machine is not what image backups are for.

And to be really honest, it’s not why you back up.

An image backup includes the detailed settings and configuration information for the specific hardware being backed up. When restored to a new/different machine, those settings no longer apply. The backup can still be useful, but not for what you’re trying to do.

So, when is an image backup useful? Let’s look at a couple of scenarios.

Image backups are invaluable if a hard disk fails or when malware strikes, allowing you to recover from disaster. They can be useful if you need to restore specific files that have been lost or move files to that new machine. Restoring an old image backup to a new computer, however, is not what those backups are for.

When your hard disk fails

If your hard disk fails, you don’t need to replace your entire computer. Just get a replacement hard drive (perhaps a bigger one, to increase the capacity while you’re at it) and swap out the old drive for the new.

That’s a perfect scenario for an image backup.

Your image backup software can then restore the image you took to the new hard disk, and everything will work as before the failure.

I have encountered some seriously infected machines. You can try to disinfect and remove malware, but once you’re infected, you’ve basically lost control of your machine. You may have clean scans, but you never really know all the malware is gone — unless you restore to a backup image taken prior to the infection.

This is one of the more common uses for image backups.

There’s nothing as reassuring as being able to say, “Oh, well, darn, my machine’s been infected! I’ll just restore to last night’s backup,” and poof, the machine is clean.

When you want to copy or restore some files

You don’t need to restore the entire image. You can pick and choose files, folders, and whatnot from an image to restore to your machine or copy to a new one.

The reason images are so wonderful is because they contain everything. You don’t have to rely on figuring out what needs to be backed up beforehand, so there’s no worrying that you may have missed something.

If I delete a file today that I later find out I needed to keep, I can go to the image backup I took last night and simply restore the file. Similarly, when you’re moving from machine to machine, using your image backup as a way to transfer your data files is a perfectly reasonable approach to getting them to your new machine.

When you move from one machine to the other

It is sometimes physically possible to do what you ask: you can restore an image to a different machine, reboot, and hope it works. Windows will do its best to reconfigure itself on the fly to what it sees as a massive hardware change.

It usually doesn’t work. Often your machine will not boot, or will run with many, many problems quickly becoming apparent. Even if it appears things are running smoothly, you simply have no confidence that there’s not an incomplete change or other configuration problem lurking somewhere to cause you grief when you least expect it.

Some backup programs attempt to address this issue: they can try to reconfigure an image taken from one machine and “restore” it to new hardware. Macrium Reflect includes this feature, called “ReDeploy”, in their Professional version. I have used it at least once1, and  it did “OK” — there remained a few issues, but it served my needs at the time.

Image backups are incredibly valuable and useful for many different scenarios. But their primary purpose is not transferring to new machines; it’s backing up your existing one.

When you move to a new machine, the best solution — for many, many different reasons — is a fresh start with a clean install. 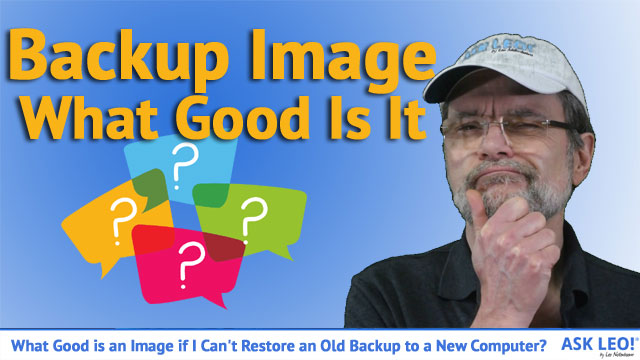 1: I restored a friend’s Windows Vista installation to a virtual machine so as to be able to refer to it later, after upgrading their machine to Windows 10.

41 comments on “What Good Is an Image If I Can’t Restore an Old Backup to a New Computer?”