My machine is slower than molasses in the winter time. I suspect that one or more programs are simply using up all of the available CPU time. How do I tell which ones they might be so that I can turn them off, or whatever? What’s using all my CPU?

It happens to me from time to time as well. A program decides it has something very, very important to do and uses all the computer’s processing power to do it.

The good news is, it’s pretty easy to find out which program that might be.

Computer CPU cores can only do one thing at a time. It seems like more because they’re switching between tasks faster than we can see. When a task performs intense calculations, or just has a bug, it can “hog” or use all your CPU, preventing other tasks from running smoothly or at all. Windows Task Manager can show you who’s using all the CPU.

Multitasking is a lie

All evidence to the contrary, computers can only do one thing at a time.

More precisely, each computer’s core can only do one thing at a time. A dual-core machine can do exactly and only two things at a time, a quad-core can do four, and so on.

Be it one core or dozens, to you and me it looks like one computer doing several things at once — many more things than it has cores.

The magic is that the computer is constantly switching back and forth between all those things so quickly that it looks like they’re all happening at once. They’re not.

When one program needs all of the CPU’s attention, other programs that also need the CPU might not get enough time to do their work. Exactly how that manifests on modern multi-core machines depends on how the software was written.

If the software was written assuming a single CPU — so-called “single-threaded” software — you’ll see one core of a multi-core processor fully used1 while the other cores remain available for other things. You might see a solid 25% CPU usage on a quad-core computer, for example.

Sometimes, it’s the right thing to do; what you’ve asked the program to do requires all available computing power.

Sometimes, it’s a bug or a sign of some other problem.

In Windows 102, Task Manager helps us determine what program is hogging the CPU.

Right-click on the clock and click on Task Manager. The initial view may be exceptionally unhelpful.

By default, Task Manager only displays those programs you’ve explicitly run.3 We want to know about everything, including the software making up Windows itself.

Click on More details near the bottom of the window.

Not only will you see many more programs listed, you’ll see the system resources each is using.

Click on the “CPU” column header. This will sort the list of running software in order of decreasing processor usage.

In this example, it’s OneDrive — or rather, the OneDrive service —  that’s the biggest current user of CPU: 26.4%. If this were a quad-core machine, I might suspect OneDrive was completely using a single CPU. Since this is a two-core machine, it’s just OneDrive doing its thing, which is not uncommon, particularly after rebooting.

Svchost can be special

One of the common culprits in unexplained CPU usage is something called “Service Host”, or SVCHOST. You can see it as the #2 item in the list above.

Click on the “Name” column heading to sort the list by category and name once again, and then scroll down to Windows Processes. You’ll see many instances of Service Host running.

Service Host does many things, as you can see, but one of the more common culprits over the years has been the Windows Update service. For a variety of reasons, it used to commonly get confused and show up as hogging a CPU. There are several approaches to fixing Windows Update.

Be it Service Host, OneDrive, or something else, Windows Task Manager is a quick way identify CPU-hogging culprits. 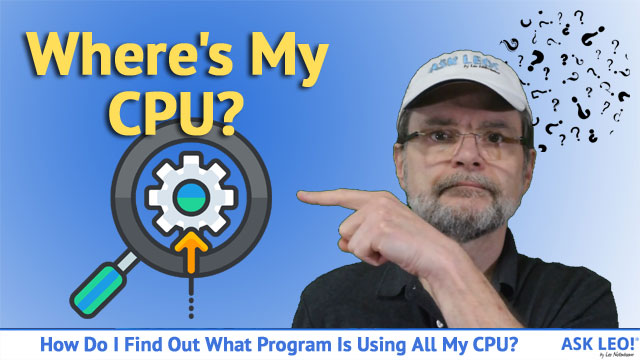 1: In reality, it’s rare that a single core will be maxed out, but the work will be spread out among all cores as Windows shifts the program around. The net effect is that each core will show a percentage of use equivalent to a single core being 100% utilized — for example, 25% usage on a four-core machine.

2: For previous versions of Windows, I tend to prefer the free download Process Explorer, also from Microsoft.

3: Actually, the definition is a little weirder than that, from what I can tell.

40 comments on “How Do I Find Out What Program Is Using All My CPU?”