It’s not so common.

'Common sense' is frequently suggested, often missing, and rarely defined. I'll take a look at some of what I feel are the characteristics of common sense.

When it comes to internet safety, the most oft-cited advice is:

The most common response is:

Great. Just what exactly does that mean?

When it comes to technology and safety, “common sense” is important, poorly defined, and quite uncommon.

Let’s see if we can define it with some already-familiar rules.

What is common sense?

Common sense can be summed up in several familiar adages:

If it sounds too good to be true…

Many malicious incursions mask themselves in promises of the seemingly irresistible.

Practical examples of offers that really are too good to be true include:

Common to most, beyond the fact that the promises seem extreme, is that you weren’t looking for them when you found them.

Look at any website, and you’ll see advertisements. Many are legit and well-positioned, but others are little more than over-the-top attempts to get you to click or download whatever they have to offer.

Particularly when you’re not looking specifically for something, don’t fall for extreme or outlandish claims. The same can be said of most shared or forwarded hoaxes and urban legends as well as many news stories.

If it ain’t broke, don’t fix it

Whether following over-inflated promises such as those I just mentioned or out of desperation, I often see people trying to do things to their computers that have nothing to do with a problem they’re experiencing.

I understand that each of those assumes a certain amount of knowledge. How do you know you don’t have a specific problem? How do you know malware isn’t present? How do you know that the problem you’re experiencing is with the website you visit and has nothing to do with your computer?

That’s a fair concern. But if you don’t know that you have a problem, then why are you trying to fix it?

Turn the thinking around.

Research the problem first. Confirm you actually have a problem that needs fixing before you try to fix it.

The economist’s old acronym is TANSTAAFL: “There ain’t no such thing as a free lunch.” That’s exceptionally true online.

Every “free” service has a cost. It may be the advertising you see, the mailing list you need to sign up for,  the personal information you’re sharing, or something else entirely, but there is no such thing as “free” on the internet.

Most commonly, people fall into the “free” trap through advertisements of this variety: “FREE Scan! Scan your computer for malware for FREE!”

Some of these ads are 100% accurate. The scan is completely free. The not-so-free part? If you want to do anything about what the scan finds, you’ll need to pay. It’s a common sales tactic.

Less reputable programs lie to you. They warn you of malware and other scary things you don’t have or that aren’t issues — all making it appear that giving them your money is the only way to avoid certain doom.

This brings us to another important point.

Read what’s in front of you

This is a point that frustrates me. It works like this:

When something goes wrong with your computer, take the time to read what’s on the screen in front of you. I get so many questions that could be avoided or quickly dealt with had the questioner just slowed down and read the instructions in front of them.

I understand that those instructions are not always comprehensible. Honestly, I do. But sometimes they are so clear and obvious that just taking the time to slow down and carefully read what’s on your screen will get you a long, long way.

Which brings us to the flip side of the coin.

Don’t believe everything you read

I’m a firm believer that people are basically good.1

But that doesn’t mean that everyone is good or that everyone has your best interests in mind, particularly when it comes to the internet.

It’s too easy, particularly in today’s connected and information-rich world, to spread misinformation as fact. We see it all the time.

Misleading ads are only one blatant example. Misleading ads pre-date the internet by decades, if not hundreds of years. It’s just that today’s technology often makes it difficult to distinguish snake oil from valuable and effective medication unless we’re careful.

The internet can also supply us with a wealth of information to help us separate over-inflated claims from reality.

It can also provide us with even more misinformation.

“It’s on the internet, so it must be true” is one of those statements everyone laughs at because it’s so blatantly wrong, it’s laughable. Common sense tells us that because something is on the internet has absolutely no bearing on its accuracy.  Yet we see people act as if it is, believing random and misleading statements from vague sources with less-than-altruistic agendas.

With information coming at you from so many random directions from sources both reliable and unreliable, it’s critical that we not believe everything we read just because it’s been formatted attractively2 on a site that looks authoritative.

And that brings us to the most important point of all.

Above all, be skeptical

Question everything. Even me.

Never accept information at face value, particularly on the internet, and particularly from sites or individuals you’ve never heard of before.

Be skeptical. Ask questions. Consider the source and what that source’s agenda3 might be in spreading its message.

Over time, develop a set of resources that you trust. Naturally, I hope Ask Leo! will be one of them, but honestly, what matters more is that you reach out and find your own trustworthy sites, sources, services, and individuals.

Then use those resources to help you evaluate the constant stream of information and misinformation heading your way.

Yes, that’s a little bit of work. But it’s critical.

Learn the basics of how to not only use a good search engine (Google, Bing, or others), but also how to interpret the results. Understand the difference between the advertisements presented on the search results page and the actual results.

Look for well-known reputable sites in those results, not just sites that happen to rank highly. As much as search engines work to make it not so, ranking highly in a search result is not an indication that the site is legitimate or trustworthy.

If you’re uncertain how to go about researching a particular topic, there’s nothing wrong in asking for help. You may have more experienced friends or family members who can help you find what you’re looking for. Librarians are also valuable resources when trying to determine the validity of information you run across online.

Regardless of who’s helping you, it’s still important to be skeptical. When they suggest a site as a trustworthy resource, don’t be afraid to ask them why they trust it.

There are two types of confirmation:

The first isn’t confirmation at all, it’s repetition. The problem is, when enough sites and so-called sources all repeat what only one of them has said, it may feel like many sources have all come to the same conclusion. In reality, it’s nothing more than a single opinion repeated over and over. This is known as the echo chamber.

Remember: repetition isn’t confirmation. You want to find multiple sources that are confirming (or denying) the issue, and are doing so having arrived at their conclusions independently, using their own research.

I’m a huge believer in using sites like snopes.com4, factcheck.org, mediabiasfactcheck.com, politifact.com, truthorfiction.com, or any of several others before reacting to the latest over-the-top, can’t-possibly-be-true news story, tech tip, or emailed rumor.

Many are very timely and do the kind of research you want to see before getting all excited or worked up about what just landed in your inbox.

There are resource sites for just about any topic. Develop a set of sites that you trust. For example, when it comes to technology, I would hope Ask Leo! is on your list. Visit the sites for which you already have a level of trust and see what they say about the issue at hand. As always, I’m not saying that you need to trust them completely, but use them as part of your research to develop your own well-thought-out opinions.

The bottom line is this: if something you run across is worth the effort of taking any action at all — even if it’s just to forward an email — then it’s also worth your time to research it first. At worst, it may save you some embarrassment. At best, it could protect your computer, your identity, and even your possessions. 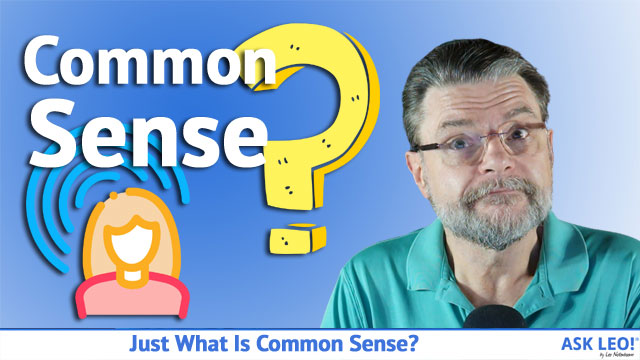 1: That’s one reason I took on heroicstories.org and run notallnewsisbad.com.

2: Also not new. I’m fairly certain that my good grade on a paper I turned in while in college was due to the fact I’d figured out how to use a word processor to make it look much better than it was.

3: And don’t kid yourself, every source has an agenda. More here: Stop Spreading Manure.

4: No, Snopes isn’t left-wing biased. Generally people claiming so are simply unhappy with the truth Snopes has uncovered. Nonetheless, if you’re not happy with Snopes, look at any of the multiple debunking sites that are available these days.

28 comments on “Just What Is Common Sense?”