In an example of yet another brouhaha, supposedly in a report a few years ago, Google supposedly admitted you should have no expectation of privacy whatsoever when using their services. The internet went crazy. Many sources proclaimed, “How outrageous! We told you so! Google is evil!” Mainstream news outlets picked up stories from smaller publishers, and they all confirmed the entire sordid mess.

Except the internet was wrong. Manure, to use a polite term, was being spread far, wide, and fast.

This is where things get complicated.

You and I and everyone we know must become more skeptical and more demanding of our news and information sources. You and I must THINK about what we read. You and I must realize we might be wrong. And you and I must stop spreading anything we aren’t sure is the truth.

Everyone has an agenda

On the internet, a similar statement can be made: everyone has an agenda.

Every website, news organization, and person sending an email, publishing a newsletter, or posting a comment has an agenda of some sort. They have something they want you to do, think, or become.1

All too often the agenda being promoted is inconsistent, for lack of a better word, with reality.

In other words, the information you present is almost always colored by your agenda. People highlight facts supporting a particular agenda, conveniently minimizing or ignoring facts that don’t. In the worst case, people fabricate “facts” to support their agenda.

Yes: not everyone, but some people, lie. Perhaps more often than you think.

To be honest, we all do it: we color what we say and do with data to support what we believe, often to the exclusion of all evidence pointing out the unthinkable:

If it’s on the internet, it must be …

There’s an interesting and strange conflict in our culture.

Most people realize that “If it’s on the internet, it must be true” is a sarcastic falsism expressing just how inaccurate information on the internet can be. Just because it’s published on a website somewhere (or shows up in your inbox, or on Facebook, or wherever) doesn’t make it true.

However, I would wager most people actually do believe most of what they read on the internet. Those same people smiling knowingly at that falsism go on to believe the strangest, most bizarre, completely false things, as long as the information is presented in a seemingly credible way.

They do it without thinking and without seeing the irony in their behavior.

From what I’ve seen, it’s getting worse.

We believe what we want to believe

Confirmation bias is the tendency we all have to believe things that confirm what we already believe and dismiss what doesn’t. Confirmation bias can be as simple as dismissing alternative viewpoints out of hand, and as horrific as being tried and arrested for expressing beliefs that are not commonly accepted (think Galileo).

The problem with confirmation bias, as Galileo so clearly illustrates, is that it often stands in the way of the truth.

“Echo chamber” is a term we’ve been hearing more in recent years. It’s the tendency of information sources — most notably news media — to repeat each other. In a sense, they use each other as sources. The problem is a story originating from a single source — be it true or false — can appear to have massive confirmation when we see it presented in a variety of supposedly independent sources.

Those sources aren’t independent at all. They’re just repeating what they heard from each other.

And it all started from a single source.

A source with an agenda.

It’s much easier to comprehend “true” and “false” than it is to deal with the potential uncertainty of “mostly true”, “kind of wrong”, or something in between. Unlike whether the sun circles the earth or the other way around, the issues that we consider, discuss, and even rant about are rarely so simple as to have easy yes/no, black or white answers.

The folks who write headlines and push agendas know thinking is hard for many of us. They know black and white is easier, and (bonus!) much more sensational. So, they simply pick and choose the “facts” supporting black-and-white thinking at the exclusion of the significantly more nuanced truth.

So is your email private with Google or not?

It’s not that simple. It’s still not a yes-or-no answer.

Even though some sites posted clarifications and/or updates, they often did so too late (the misinformation had spread) or too little (the “clarifications” remained biased to the pre-existing story or agenda).

Email privacy, and privacy on the internet in general, is a critically important concept. Services like Gmail do process your email to do things like serve related ads that pay for the free service, or populate indexes so you can search your email quickly. Are there teams of people sitting behind computer monitors reading your email? Almost certainly not.

However, unless you encrypt your email, it is by definition fundamentally not secure. This is nothing new, or specific to Google.

And yet, in the pursuit of clicks, page views, and anti-Google sentiment, some sources pick and choose what to present and sensationalize how they present it.

So what’s the solution?

You. You are the solution. You and I and everyone we know must — and I really do mean must — become more skeptical and more demanding of our news and information sources.

You and I must THINK about what we read. We need to learn to identify the sources and the agendas those sources have that color what they present and how they present it.

We need to learn to seek unbiased information and draw our own conclusions.

Whenever you accept misleading or inaccurate stories as truth, you’ve been manipulated to serve someone else’s agenda. And when you pass those manipulative stories on to friends, family, and acquaintances? Well, my friend, you’ve just turned into a virtual manure spreader.

Because manure is what it is.

If it sounds outrageous — even if it supports your beliefs — there’s a hefty chance that it’s completely bogus. Overly sensational or outrageous-sounding headlines or content are a hallmark of bogus stories.

Do a little research. Check and verify the sources; follow the trail. If they all point back to a single source (or no source at all), realize what you’re looking at. One source repeated in a thousand places doesn’t make it a thousand sources.

In the past, we could count on the media to fact- and source-check for us, but that’s clearly no longer true. In the race for media outlets to publish quickly, the effort to make sure it’s accurate has apparently been left behind.

It’s all lost in the noise: covered in manure.

The non-profit world has a term: “donor fatigue”. This applies to potential contributors who, while supportive of a particular cause or organization, simply get tired of being asked for money, time, or whatever repeatedly.

The same is true here.

Call it “manure fatigue”. It is tempting to disregard anything found on the internet as likely to be bogus.

Unfortunately, there are legitimate outrages, atrocities, and issues of privacy that really do deserve our attention and our understanding.

It just takes skepticism and thought to separate the wheat from the fertilizer. 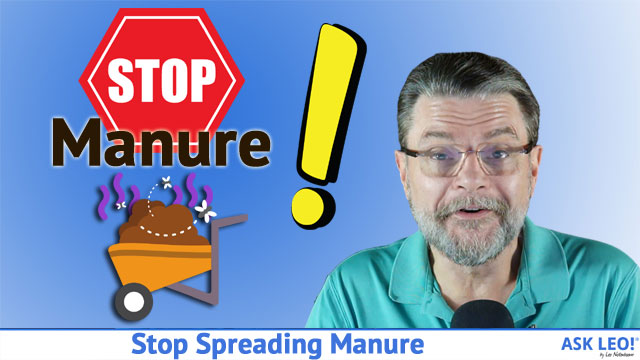 1: My agenda is simple: I want you to be more skeptical before you believe what you see on the internet, and I want you to stop spreading misinformation. I’d love for this article to go viral and garner more Ask Leo! newsletter subscribers and site visitors, as well as improve my site’s reputation with Google. I have a large agenda. And don’t think for a moment that other sites, services, and individuals don’t have agendas that are as large or larger.

2: Selected at random from a Google News (irony) search on “Google Privacy”.