How to know when to replace it.

Age isn't the most important factor when evaluating hard disk risk of failure. I'll discuss what is, and what you should be doing to protect yourself.
What is the indication that a hard drive is getting too old, and when should one replace it ??

This is a pretty common-sense question.

You would think there would be a common-sense answer.

Let me explain why that is, and what you need to pay attention to instead of age.

Hard drive failures are unpredictable. Some may show warnings, but many will not. Failures can be sudden, complete, and permanent. The only protection is a backup strategy that protects whatever you keep on your hard drives.

The root of the problem is that drive failures are almost impossible to predict.

Many hard drives seem to last forever. They often outlast the useable life of the computer they’re in.

Some hard drives die quickly. Manufacturers try to identify those by running them for some amount of time before they sell them; the early failures never see the light of day.

Some hard drives give you warning quite literally, showing pop-up warnings that something is in the process of going wrong and that the drive should be replaced soon.

Some hard drives just get slower or have other performance-related issues. They work, kinda, but get slower and slower over time.1 The most common cause is bad sectors on the drive. This can sometimes be alleviated, at least for a time, by running CHKDSK /R on the drive.

Failures can be sudden

Most importantly, and I’d say even more commonly, hard drives just die with no warning at all.

One moment, all is well. The next moment, it’s not.

If you’re lucky, you can salvage the drive. With a little more luck, you might salvage some or all of the data.

More often, though, the drive is toast, never to be heard from again. (Or perhaps never to be trusted again, if you manage to salvage anything.)

You know where I’m going

This is why backing up is so critical.

Your computer is under constant threat of catastrophic failure. Hard disks are just one example — the failure could be anywhere. Be it hardware, software, or malware, things can suddenly go poof.

I’m not saying that catastrophic failure is likely; I’m saying it’s possible. It happens. And it can happen without warning.

Thus, backing up so that a sudden failure isn’t catastrophic is critical to using your computer with confidence.

What was once a hard disk with large capacity becomes “smaller” as Windows, your programs, your data, and other things expand. Your hard disk hasn’t actually gotten smaller, it just seems like it because everything you store on it has become larger. Eventually, you run out of room.

Short of replacing the entire computer (usually completely unnecessary), the pragmatic solution at that point is to replace the disk with something larger.

Has it failed? Not really. You might move it to a different, older computer, or throw it in an external drive enclosure, or repurpose it in some other way. But it’s “failed” in that it no longer meets your growing needs.

Realize that your hard disk can fail suddenly and without warning at any time. The probability is low, but definitely not zero.

I’ve said it before, and I’ll keep saying it because it’s critically important.

The only way to protect yourself is to make sure you’re backing up completely and regularly.

It’s happened to me, and it could happen to you.

You can see me talk more about backups and other topics by subscribing to Confident Computing! Less frustration and more confidence, solutions, answers, and tips in your inbox every week. 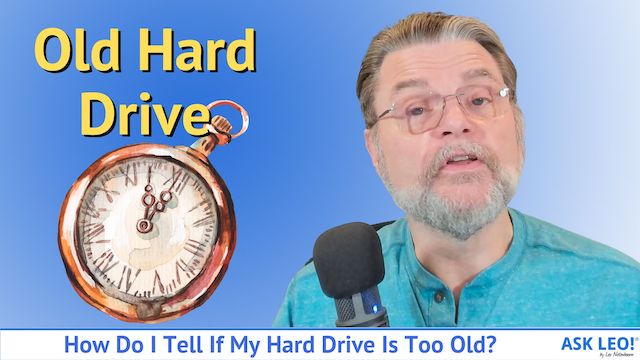 1: Defragmentation used to also cause this, but since version 7, Windows has been defragmenting its hard disks automatically, once a week by default.