How much do you want to check?

CHKDSK is a powerful Windows utility used to diagnose and repair disks. /F and /R represent two types of repairs.

Chkdsk is a Windows utility that diagnoses and possibly repairs disk issues. It has several options, but the two most commonly cited are /F, for fix, and /R, for repair.

Yes. But when it comes to CHKDSK, no.

While “fix” and “repair” are synonyms in English, CHKDSK uses them to mean two different things.

CHKDSK /F is concerned with the file system overhead information that tells Windows about the files, folders, and data on the disk and their disk locations.

If errors are found, CHKDSK /F does its best to repair the information, though it’s not always possible.

If you’ve ever had to run CHKDSK on boot because the drive is in use when you tried to run it normally, you might wonder where the results went. How Do I See the Results of a CHKDSK that Ran on Boot? has the answer.

CHKDSK /R begins by performing the same function as CHKDSK /F. (This implies that “CHKDSK /F /R” is redundant, as /R includes /F.) CHKDSK /R is also concerned with the physical condition of the information stored on the disk — more specifically, whether or not the data is readable.

Think of this as carefully examining our book page by page to make sure that all the text is legible and no pages are torn. This step doesn’t care what’s on the pages; only that they can be read and aren’t damaged.

In disk terms, CHKDSK /R scans the entire disk surface, sector by sector, to make sure every sector can be read properly. As a result, a CHKDSK /R takes significantly longer than /F, since it’s concerned with the entire surface of the disk, not just the parts involved in the Table of Contents. It carefully examines every single page, not just those referenced by the Table of Contents.

If errors are found, CHKDSK /R does its best to work around them, though it’s not always possible.

If errors are found…

Both /F and /R attempt to fix any errors they find.

CHKDSK /F attempts to build a new Table of Contents, meaning it tries to repair the file system overhead information. Depending on the nature of the errors found, though, CHKDSK may not succeed, resulting in lost files.

Occasionally, CHKDSK /F uncovers information that should be a file, or part of a file, but doesn’t know what to do with it. Then it creates “.CHK” files to contain that information. In our book analogy, it’s like saying “I found these pages, but I have no idea which chapter they belong to.”

CHKDSK /R attempts to use spare disk sectors, if any are available, to take the place of damaged sectors it finds, and then marks the original sector as “bad”, indicating it should no longer be used.

Because many people first learn about missing files or bad sectors after running CHKDSK, they often blame it for causing those errors. That’s a clear case of shooting the messenger.

CHKDSK doesn’t cause errors; it uncovers them. The errors were already there.

Disk errors happen. Disk failures happen. CHKDSK is one useful tool for recovering from certain types of errors — but you still need to back up. CHKDSK can’t save you from everything, regardless of whether you use /R or /F.

Run CHKDSK occasionally when you suspect you’re having disk problems. On a disk without issues, it’s completely safe, and if there are issues, repairing them may recover data and/or extend the life of the disk itself.

When you’re done, subscribe to Confident Computing! Less frustration and more confidence, solutions, answers, and tips in your inbox every week.

Whether you use CHKDSK /F or /R depends on the type of problem you suspect and the amount of time you have. If you suspect some data has simply been corrupted, then “/F” is perhaps the better, faster choice. On the other hand, if you suspect a physical issue or damage, then /R will scan the entire surface, though it’ll take longer to do so.

Can I let CHKDSK /F /R run all night on a conventional HDD?

Yes, it’s not only safe but often recommended that you allow CHKDSK to run until it completes, especially if it appears to be taking a long time. Generally, excessive CHKDSK times indicate a problem with the disk surface, and the extra time is /R doing everything it can to recover data that might otherwise be lost. 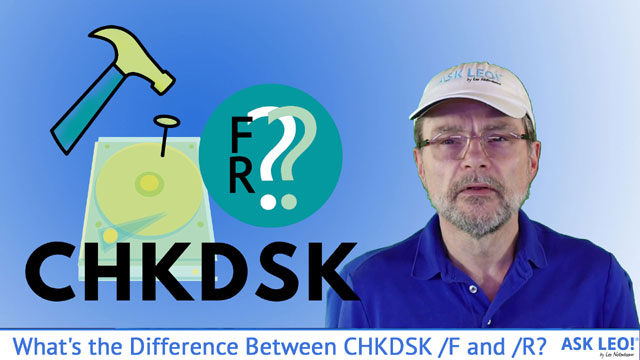 50 comments on “What’s the Difference Between CHKDSK /F and CHKDSK /R?”