Some time ago I think I read on your site that flash drives can wear out. Now, I keep my flash drive in all the time because I’m a writer and am always backing things up on the computer and the flash drive, but I dislike having to close the flash drive down, take it out, only to reinsert it again after I take a break or run an errand. And I always leave it in when I run a full system scan because the flash drive will get scanned also.

1. Is it harmful to the flash drive to just leave it plugged in 24/7, even when I put the computer on standby for the night?

2. Why is it necessary to shut the flash drive down before removing it from the computer? Why can’t I just pull it out when done?

3. And if I am correct about flash drives wearing out, what wears out? As far as I can tell, they have no moving parts. And at what point should I consider replacing the flash drives I have?

These are very legitimate, but unfortunately very tough, questions to answer.

Flash drives do wear out, absolutely.

But exactly when a flash drive will wear out depends on so many things, it’s impossible to give a specific answer. All I can say is “It depends.”

I’ll give you some guidelines that I’d follow on using a flash drive, were I in your shoes.

You’re correct: there are no moving parts in a flash drive. A flash drive is so named because it uses what is called “flash memory” — a type of solid state memory that retains its contents even after power has been removed.

These devices wear out a little each time something is written to it. Write to it enough, and eventually writing to it will fail.

Exactly how quickly this type of failure happens depends primarily on two things: the quality of the electronics and the number of writes. SSDs — solid state drives — are also a form of flash memory, but they’re now of high enough quality that they often outlast the computer they’re in, under normal usage.

External USB flash or “thumb” drives? Not so much.

In an effort to make things faster, Windows may “buffer” data before writing it to a device. That means if you pull the device out at a random time, even though it might look like whatever you’re doing has completed, it’s possible not everything has been written. In the worst-case scenario, that could corrupt the information that tracks what’s where on the device, and cause you to lose files and data.

While it applies to both flash drives and traditional magnetic hard drives, writing to a flash drive is also slower than reading from it, so there’s a performance benefit to buffering as well. Delaying writes until they are necessary maximizes speed and minimizes wear.

The “Safely Remove” function forces Windows to flush everything to the device. In addition, it checks for applications that have files open on the device that may be in a similar partially-complete state.

Recent versions of Windows have changed their default behavior such that write caching isn’t used as much as it was in the past, so “Safely remove” may not be needed on all of your USB devices.

Should I leave it plugged in?

This is where my “it depends” really comes into play.

What it depends on is easy: is the device being written to — even occasionally — while it is left plugged in? I’m not talking about your work; I’m talking about other programs, like Windows itself, anti-malware software, utilities, and other things that — on the surface — would have no reason to write to the device.

And yet some do. Maybe.

If your computer is powered down — be it shut down, hibernate or stand-by — there’s no issue. Nothing’s writing to the device when the machine is turned off.

If, however, like me, you leave the machine on 24 hours a day, there’s a small risk.

Risk? How big a risk?

It depends on several things.

For many — perhaps even most — there’ll never be a problem. Most people might physically lose the flash drive before it wears out.

And the quality of flash memory is constantly improving. As I mentioned above, high-end flash memory used in SSDs have a practical lifespan that will probably be longer than the machines in which they’re installed.

But that inexpensive flash drive you picked up or were given for free? It’s probably not going to be that same high quality. In fact, where it’ll be on the quality scale — a scale that is constantly moving — is anyone’s guess.

But the risk is definitely there. Murphy’s Law being what it is, failure will happen when it’s least expected and most inconvenient.

Here’s what I recommend you do: plan for failure.

Assume that sometime, out of the blue, a write to your flash drive will fail. Or that a later read will fail.

In fact, that’s an assumption you should make about any storage device you use. Traditional hard disks also fail, often completely and without warning.

Make sure that through some form of redundancy, you can recover to a convenient spot.

Perhaps that means you need to save two copies every time (one to your laptop, one to the flash drive). It sounds like that’s exactly what you do.

Perhaps it means that you don’t use a flash drive at all, but rather an online storage service like Dropbox, so every time you save the file it’s updated online. That’s my preferred approach these days.

Perhaps it means deciding beforehand that it would be OK to lose a weeks’ worth of work.

Regardless of which it is, make it a conscious decision and then act on it appropriately. 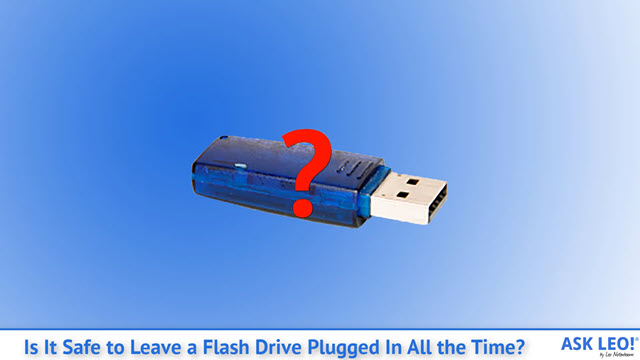 1: Also often referred to as a “USB stick” or “thumb drive”, as that’s often about how big they are and what they look like.

31 comments on “Is It Safe to Leave a Flash Drive Plugged In All the Time?”