The steps you need to carefully take next.

Occasionally, when moving a drive to another machine it'll show up as unformatted. I'll look at some possible causes and actions to take.

I recently replaced my system hard drive and have taken my old internal hard drive out and installed it into an external enclosure. When I plug it in, it shows up on my computer, but without a file system label, only a letter designation (G). Disk Management says it is unformatted. It was NTFS as an internal drive. I’m concerned that if I format it, I will lose all of my data now stored on the drive. What steps do I take to format this external drive without losing my files? Or am I missing a step in accessing the information on the drive?

Formatting will erase whatever’s on the hard drive, or at least make it much more difficult to recover your data.

I do have suggestions about what to do next.

Drive Shows as Not Formatted 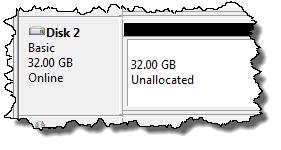 When the system indicates a drive is unformatted, that means the system attempted to read the master boot record, partition table, or other overhead information on the drive, and got a result other than the expected data.

In most cases, this means the overhead data on the disk has likely been overwritten or otherwise damaged.

Less commonly, it can also be the result of a hardware failure, either in the disk itself or the circuitry connecting that disk to your computer.

Hardware problems are the easiest to rule out.

The technique discussed here — taking an older machine’s hard drive and placing it into an external drive enclosure — is a common and convenient technique, not only for copying data from the old machine but also for continuing to use the drive in a new and perhaps more flexible role. More at: Can I Use an Internal Hard Drive from an Old Machine as an External Drive on a New One?

There is one software issue that’s worth mentioning before we diagnose hardware, and that’s file systems. Specifically, the fact that while Windows will recognize hard disks formatted by other Windows machines, hard disks formatted on Mac and Linux machines will appear as unformatted when connected to a PC

Windows generally uses NTFS, or variations of the FAT file system, as disk formats. Mac and Linux machines tend to use different formats by default which are not readable by Windows.

If you are in a situation where you need interoperability, using exFAT, or even NTFS, is generally the most cross-platform compatible.

If you have information on a Mac or Linux formatted hard drive (or thumbdrive) you’ll either need to copy the data to your PC some other way, or, on your Mac or Linux machine, copy it to a disk formatted using a PC-compatible filesystem.

If you have another computer available, plug the external drive into that and see if it is properly recognized.

Because you indicated you placed your former internal drive into an external enclosure, I’m suspicious there’s a problem with the assembly.

A working USB interface improperly connected to a hard drive could appear as an unformatted drive.

I’d make absolutely certain that the drive was properly connected to the interface card in that external enclosure. Double- and triple-check that all of the assembly instructions were followed and that the drive is attached correctly.

Want that external disk to last? How To Keep an External Hard Drive Useful and Healthy Longer

If everything seems to be connected and working properly, but your drive still shows as unformatted, then the disk is compromised and it’s time to haul out the data recovery software.

Piriform (the company that makes CCleaner) also puts out a free tool called Recuva. Among other features, they state, “Even if you’ve formatted a drive so that it looks blank, Recuva can still find your files on it.”

Naturally, no one can guarantee complete recovery, but it’s a place to start.

Another tool to consider is GetDataBack. It’s not free, but the demo version should allow you to determine if the utility will be able to recover anything. If so, the tool might be worth it. From their feature list: “GetDataBack will recover your data if the hard drive’s partition table, boot record, FAT/MFT or root directory are lost or damaged …”

This all would be moot if…

I’d be remiss in my job if I didn’t point out that none of this would matter — or at least it wouldn’t matter nearly as much — if you had backed up the contents of that drive.

Remember the rule of thumb: if it’s only in one place, it’s not backed up.

Hard drives fail, often without warning. That can result in complete data loss.

Whether or not you recover your data this time, resolve to put a backup strategy into place so the next time there’s an issue (and please trust me, there will be a next time) the solution is simple: just restore your most recent backup.

Why is my external hard drive not formatting?

In general external hard drives don’t format because they’re not completely connected to the system. The very first thing to check is the cable, making sure it’s not damaged, and that it’s securely connected at both ends. Try the drive in another machine to see if perhaps the problem is with your machine and not the drive itself. It’s also possible that the drive, or its interface, is damaged.

How do I find my external hard drive?

Your external hard drive should show up automatically in Windows File Explorer when you attach it. If not, then right-click on the Start-menu, click on Disk Management, and look for the drive in the resulting list. If not present you’re likely facing some kind of hardware issue. If it is present you may be able to assign it a drive letter manually, or examine its properties to determine why it’s not showing up.

Is a SSD better than a HDD?

An SSD, or Solid State Drive, is generally a better choice for internal hard disks than a traditional spinning platter HDD, or Hard Disk Drive. SSDs are both faster and quieter, though they are more expensive. HDDs remain good choices for external hard disks when speed isn’t as much of an issue, and cost often is. 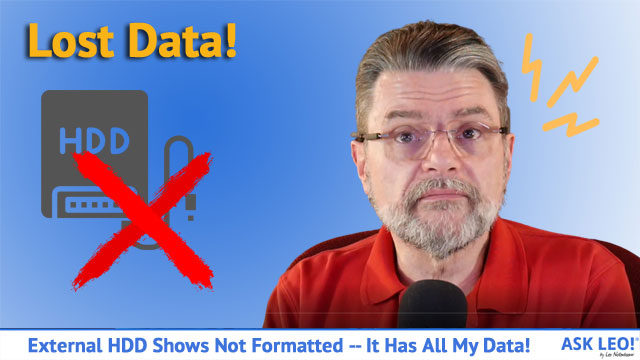 63 comments on “My External HDD Shows Not Formatted — But It Has All My Data!”