What it means and how to fix it.

I think I’ve got a problem with my hard disk. I tried to run Chkdsk, but I keep getting this “Chkdsk cannot run because the volume is in use by another process” error. What’s that mean and what do I do to fix it?

Chkdsk is an important and little-understood command-line utility that comes with every version of Microsoft Windows. Its purpose, as its mangled name implies, is to check your disk.

In order to do its work, Chkdsk needs complete and exclusive access to the disk it’s about to check. If it doesn’t have that, the result is the error message “Chkdsk cannot run because the volume is in use by another process”.

I’ll look at why, what to do, and what it looks like as it happens.

CHKDSK and a disk in use

Here’s the scenario we’re talking about:

To see it yourself:

As you will see, “Chkdsk cannot run because the volume is in use by another process” is the result.

The other process? Windows itself.

Chkdsk is, as its name implies, a disk-repair utility included in Windows. For more about what it does and why it matters, see Chkdsk: What Is It and How Do I Run It?

… because the volume is in use by another process

In order for Chkdsk to be able to fix or repair a disk, it needs to be the only program accessing that disk. (Volume, in the error message, is simply another term for disk, or more correctly, partition; process is another word for program.)

If any other program has a file open on the disk, it’s considered to be “in use”, and Chkdsk can’t get the exclusive access it needs.

“But I have no programs running!” I hear you say.

Yes, you do: Windows is running. In fact, Windows has several files open, including the files containing the registry, the system paging file, and the executable files that make up Windows itself.

Chkdsk cannot fix or repair a drive from which Windows was loaded while Windows is running.

Chkdsk on other disks

While getting this error on the Windows drive is the most common, it’s certainly not the only case. Let’s say you have a drive “D:”. If you have Windows File Explorer open on drive D:, or perhaps have a document open on that disk, the same situation applies.

The solution is easier, though: close those programs. Make sure nothing is accessing anything on that drive and try again. You should be good to go.

The answer is actually in part of the error message we see:

Answer the question with a “Y” for yes, followed by Enter, and Chkdsk will run the next time you reboot Windows, before Windows itself begins to run. That’s the only time Chkdsk can have the exclusive access to the system disk it needs.

When you reboot, all proceeds normally until the screen changes to give you the opportunity to skip disk-checking. This simply skips running CHKDSK at all.

As the message indicates, you have a few seconds to press any key on the keyboard to skip the disk check, after which Chkdsk proceeds.

Once Chkdsk completes, the computer should reboot and load Windows normally.

The information generated by Chkdsk running at boot time is saved to the system event log. The article How Do I See the Results of a Chkdsk that Ran on Boot? shows you how to view it.

“Chkdsk cannot run because the volume is in use by another process” simply means that in order to fix your hard disk, Chkdsk needs to be the only program accessing it. For some drives, that’s as simple as closing the programs that are active on the drive in question. For the system drive from which Windows was loaded, it means you need to allow Chkdsk to run the next time you reboot.

Can running chkdsk cause problems?

Many people believe that CHKDSK can cause problems, but that’s generally not the case. Instead, CHKDSK uncovers problems that already existed. The process of repairing those problems can sometimes make pre-existing issues more evident, making it appear as if they are new when they are not.

What to do if chkdsk is not working?

It depends on the exact mode of the failure, but if CHKDSK cannot run, or cannot repair the issues it discovers on the disk, the very first thing you should do (if you haven’t already) is to back up the contents of the hard disk as soon as possible. The most pragmatic solution may then be to reformat the disk, which would mean reinstalling all software that had been installed on the drive — including Windows, if it’s your system drive — and restoring the data to the drive.

How to fix a slow chkdsk?

If CHKDSK is exceptionally slow, the best solution is to allow it to complete, particularly if it’s running with the “/R” option to repair damaged sectors. When sectors are damaged, attempts to repair them can take an excessive amount of time. Damaged sectors can cause more serious problems later, including crashes and data loss, so it’s worth the extra time to process the repair. 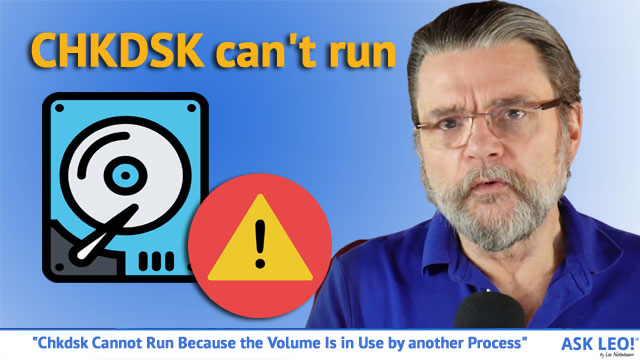