Looking forward by looking back.

Feeling reflective, I look back on my career path to see what we might learn from it that could apply to today's youth.

I was feeling rather reflective the other day, which lead to a discussion with a visiting friend about what their young son could expect over the course of his lifetime.

I started by looking back in order to look forward. It turns out I have a lot to look back on.

The one constant in my career has been change. Now more than ever, change is happening to more people in more ways.  Those who’ll benefit the most are those who constant adapting to it, learning new skills along the way. We simply cannot predict what the world our children will live in will look like, but we can prepare them by teaching them the skill of learning how to learn.

I first encountered a computer in 1976, and as I’ve discussed elsewhere, it was love at first sight. That this could be a career thrilled me.

The intervening years have seen me:

It’s a long list, and I glossed over more than a few things to make it as short as it is.

Hidden in that list is something I believe is incredibly important.

I’m often asked what specific skill is most important. Like my career, it’s not at all what I would have predicted 40 years ago. See The Most Important Skill. (Hint: it’s a skill whose value never changes.)

There’s nothing at the bottom of the list that could have been reliably predicted by what’s at the top or what came before.

Put another way, there’s absolutely no way I could have known in 1976 what my work in 2021 would entail, other than the very vague terms computers and technology. Things are moving too quickly in directions we simply can’t guess in order to make long-term predictions, much less long-term commitments.

Here’s another implied takeaway: it’s not going to stop.

The ramifications of change

In past eras, we could train for a job, skill, or career at a young age, do that job for the majority of our working lives, and retire.

One job, one skill, was all you needed for your entire life. As long as you were good at it, it was something you could count on to keep you active, feed your family, and meet your needs.

That is no longer true.

More importantly, perhaps, it’s no longer true for the majority of careers, not just the technology-related ones. You see it all around you: as things change, the underlying infrastructure changes as well. The clearest example might be coal mining. As energy production moves to cleaner and more efficient sources, the need to dig black rock out of the ground is declining. If they want to remain productive, individuals involved need to discover new skills and new careers.

You can no longer count on being able to do the same job until you die.

To bring this back to my friend’s young child, it means this: exactly what skills you learn in school is less important now than it ever was because you can be certain that skills needed to remain useful will change significantly over your lifetime

. And the implications of such a change can be dramatic.

What if your doctor is offering advice that has been rendered obsolete since they finished medical school?
– Shane Parrish, Half Life: The Decay of Knowledge and What to Do About It

Knowledge changes. What were once accepted facts are continually updated, refined, or replaced as new information, technologies, and tools become available. This is how science works.

It’s no longer enough to go to school and get a job.

You need to stay in school for the rest of your life.

You can never stop learning.

The most important skill for my friend’s young child

“The faster the pace of knowledge changes, the more valuable the skill of learning becomes.”
– Shane Parrish, Half Life: The Decay of Knowledge and What to Do About It

My friends were pushing their child to become a doctor.

My position? Besides “don’t push” (let the child decide for himself what his calling should be), my advice is to focus those energies elsewhere. Focus instead on learning how to learn, learning how to question, and learning how to fail and benefit from the experience.

I won’t say that what someone chooses to focus on today is irrelevant; it’s not. My first encounter with punch cards in 1976 set a chain of events in motion that led me to my current situation. But the chain of events is more important than the choice of punch-card technology.

All of that led to something completely unpredictable: today.

Teach your children how to learn, so they can be ready for a future you can’t even begin to imagine. 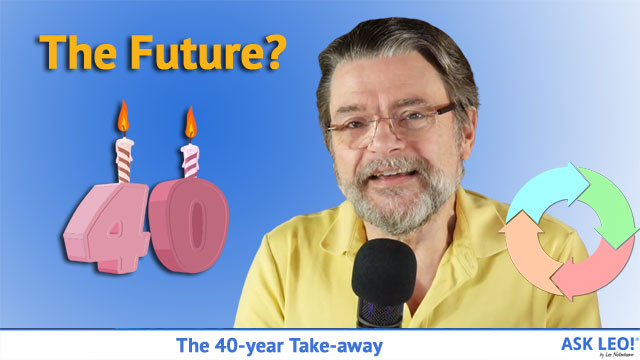