Formatting is the process of erasing a disk for use or reuse. There are a couple of different ways and options.

It’s also something we take for granted. Everyone knows how to reformat a disk, right?

Nope. Let’s not make that assumption.

Let me show you. Here are four different ways to reformat a disk.

Formatting a drive erases everything on it, so be certain that’s what you want.

Reformatting applies to disks, but not all disks look alike. When I talk about disks, that includes:

Reformatting generally applies to anything that, when attached to or installed in your computer, appears as a disk in Windows File Explorer.

But (there’s always a but), there may be exceptions. For example, if you connect your mobile phone to your computer via a USB cable, it may or may not appear as a disk. Regardless, you don’t want to reformat your phone — or if you do, you’ll want to do it from within the phone’s own interface, not by connecting it to a computer.

Reformatting a disk erases everything on it.

Sometimes that’s exactly what you want to do, and in fact, reformatting is often the quickest way to do it.

But be sure that’s what you want before you start. Proceed with the assumption that an accidental reformat cannot be undone … because most of the time, it cannot be.

Locate the drive you want to format in Windows File Explorer, and right-click on it. A context menu will appear.

For now, accept all the defaults (I’ll discuss the options later), and click on Start. You’ll first get a warning.

Assuming you have selected the correct disk and are ready to have its contents completely erased, click OK.

The disk will be formatted. How long this takes depends on the size of the disk itself and the speed of the interface connecting the disk to the computer. Since we accepted the default “Quick” format, it should take only a minute or two.

Aside from some format-specific housekeeping, a Quick format only erases list of files stored on the disk, and nothing more. The actual file data distributed across the disk is not touched or overwritten. That means in some cases, files can be recovered from a disk that has had a quick format applied.

If that’s something you want to avoid, follow the procedure above, but this time make sure that “Quick Format” is not checked.

Click Start, and after the warning, the format will proceed.

The reason it takes longer is the difference between a quick and a full format. A full format overwrites the entire disk, not just the list of files. Depending on the size of your disk, this can take a long time.

You can also format disks using the Windows Command Prompt (or PowerShell) using the “format” command.

First, identify the drive letter assigned to the drive you want to format. In my examples above, I’ve been using a thumb drive that’s drive “H:”. Enter the command “format” followed by the drive, and then Enter. In my case, that means:

You’ll note that it asks to insert a new disk. The “Format” command is one of the oldest commands and dates back to MS-DOS and floppy disks, which had to be formatted before they could be used.

Press Enter when you’re ready, and the format proceeds.

Since a quick format is really all we need for most purposes these days, you can also do that using the command line. Simply add the “/Q” command line option.

This will skip overwriting the entire disk, and simply empty the list of files stored on the disk.

Now let’s return to those options we ignored in our example above. (Let me start by saying you’ll generally be fine to ignore this section and just use the defaults.)

A couple of common questions are what file system should be used and what allocation unit to set. (These options are exposed in the Windows File Explorer interface. If you’re using the command line, type “Format /?” for a list of options including these settings.)

The file system is how the files are organized and indexed (and in some cases, protected) when written to the disk. While there are others, the most common you’ll encounter are:

Allocation units are the “chunks” in which disk space is allocated.

It’s probably best described by example. If we choose an allocation unit of, say, 1024 bytes, then:

In both cases — file system and allocation units — not all options will be available for all disk types.

And when in doubt, it’s perfectly acceptable to accept the default recommendations made by the formatting utility. 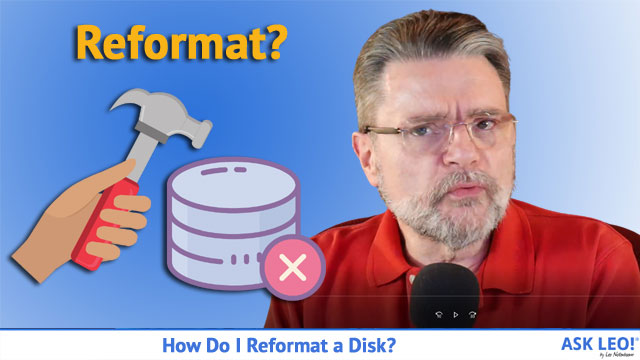 1: Mac and Linux both support NTFS to varying degrees. I’ve interchanged NTFS disks with both, but prefer exFAT for stability.

5 comments on “How to Reformat a Disk”