External drives can indeed be used as part of your own home-brew NAS. It's probably easier than you think.

I do it myself.

But first, we have to make sure we’re on the same page about what a NAS is.

NAS stands for Network Attached Storage and can be any storage attached and available across your local area network. The term can also imply dedicated devices, higher speed disks, RAID arrays, various networking protocols, and more. But a basic NAS can consist of any machine sharing its connected disk drives — internal or external — to the LAN.

Almost any storage will do.

Unfortunately, NAS has also come to imply dedicated devices that host storage optimized for file sharing. They’ll often include features such as:

If you don’t need any of that — as I don’t — then just having storage on your local network is a piece of cake.

Making your own NAS is pretty easy. In fact, it’s essentially a two-step process:

Done. You now have your own NAS.

More info on just what a NAS is or can be: What’s a NAS? How Do I Set One Up?

A basic NAS actually turns out to be a great use for an older machine.

In my case, my NAS is my old desktop machine of two generations (about 10 years) ago. I installed Linux Mint on it, and using Samba file sharing, have three internal drives and five external drives shared by any computer on my network. As shown above, it’s not pretty, but it lives in my basement, so it doesn’t have to be.

Since it’s running Linux, I can do other things with the machine (which I do), but its primary job is to sit there and share those drives, acting as a basic NAS.

You don’t have to run Linux (though of course you can), and you don’t have to get another device (though again, you can if you want to). Take that old machine you have lying around, install the most recent version of Windows you can (for security purposes), attach the drives, and share them.

If you or your machine aren’t up for installing another copy of Windows, and Linux isn’t your cup of tea, another alternative is to install FreeNAS on it. FreeNAS is a Linux-based distribution optimized specifically to act more like a dedicated NAS than a general-purpose operating system. It’s quite popular, and I ran it long ago with much success.

But, honestly, any computer already connected to your network could act as a basic NAS.

The one thing I will caution is the need to back up.

As I said, many think RAID when they think NAS. While RAID is not a backup (and should never be considered one), properly configured, it is more fault-tolerant and reliable. A basic NAS won’t have that, so you need to ensure that you have everything properly backed up…

… which you should be doing anyway. The old rule of thumb still applies: if your data is stored in only one place, it’s not backed up even if that place is a NAS — any NAS.

And that’s the primary purpose of my own NAS: backing up files, folders, and work in progress from the other machines on my network.

How do I use an external hard drive as network storage?

To use an external hard drive as network storage means you connect the drive to a machine on your network and use that machine’s sharing features to make the drive visible to others. For example, on a Windows machine, you would right-click on the drive in Windows File Explorer and then click Sharing, or Properties and then the Sharing tab, to begin.

Can an external hard drive be used as a server?

Can I connect an external hard drive to my router?

Many, but not all, routers include USB ports to which you can connect an external drive. If present, the router’s administrative interface should include options to make that drive available on the local network without needing an additional computer. Check your router’s documentation to determine if this feature is supported and how to set it up.

Most dedicated NAS devices also include the option to be accessed remotely. Check the documentation for your NAS to learn how to set it up. Since this represents a form of remote access to your network, be sure to consider the security ramifications carefully before enabling it. If you’re using your own computer to act as a NAS, remote access is generally more difficult but still possible if you set it up beforehand. Tools like Chrome Remote Desktop, TeamViewer, and others, will let you access your PC remotely, and from there you can access the contents of your NAS.

Does a NAS have to be connected to a router?

Dedicated NAS devices and computers acting as NAS’s need to be connected to your router to provide NAS functionality on your local network. Ideally, the connection is via a wired ethernet connection to maximize data transfer speeds. While some NAS’s can be connected to a router via Wi-Fi, it’s not recommended as Wi-Fi is generally slower than a wired connection.

Can NAS be used as a server?

Depending on the specific dedicated NAS, it may or may not be able to run additional applications. A NAS is, by definition, a dedicated file server, but functionality beyond that depends on the device itself. If you’re using a PC as a NAS, the typical setup is to set up that PC with an operating system such as Linux or Windows, at which point it can act as a server for other applications you might want. 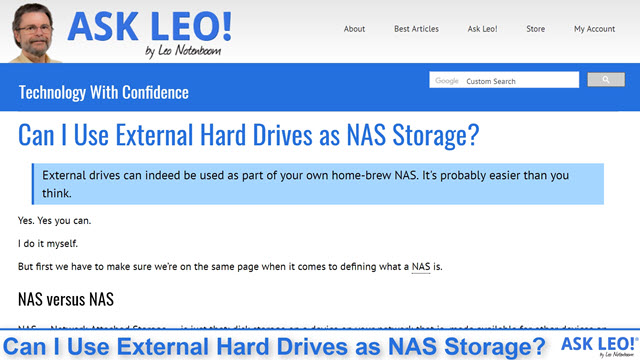 16 comments on “Can I Use External Hard Drives as NAS Storage?”