I have been reading about NAS devices lately. I like the idea of using one and would like to deploy one on my network. I have an external drive that I would like to convert to a NAS device. I was wondering if this was possible to do or not? Would I have to buy a NAS enclosure or something else?

NAS stands for “Network Attached Storage”. It’s a device whose primary function is to provide storage in the form of disk space — often lots of disk space — to other computers on a network.

I was running a dedicated NAS for a while, but then took it down. Once I understood what it really was, I decided I didn’t need another one.

NAS in a nutshell

I like to describe a NAS device as a PC without the PC.

NAS devices are often nothing more than modified or stripped-down PCs. They may not have a video display, keyboard, or mouse, but inside they use hardware that looks very similar to a standard PC.

The problem is that a hard disk doesn’t really “do” networking by itself. Additional hardware is required to interface between the network, its many configuration options, and the hard disk. So at the hardware level, a NAS is not much more than hard disks, a network interface, and the circuitry to connect them.

The hard disk doesn’t really “do” filesystems, either. That means in order to read and write files and otherwise maintain the organization of information on the disk, some software is required to implement the file system. That’s typically an operating system of some sort. More often than not, this is provided by a CPU — much like you’d find in a traditional PC — running an operating system of some sort.

The first image that comes to mind when you mention “NAS” is a dedicated box containing what we’ve described above and nothing else. Plug in power and a network connection, do some configuration (usually via a network interface of some sort), and you have a NAS.

Dedicated NAS devices typically optimize the hardware for the single purpose they’re intended for. Some include very high-performance hard drives, network connections, RAID arrays, or other forms of data protection and redundancy. These types of storage might be overkill on a desktop machine, but make a lot of sense in a centralized server with many users.

Even then, a NAS device may still look like a PC — if not on the outside, then inside the box. Many, for example, run a variant of Linux or FreeBSD1 as their internal operating system.

If a dedicated NAS device is mostly just a single-purpose PC, can you re-purpose a PC to be a NAS? The answer is a resounding “yes”.

One excellent approach to creating a NAS device of your own is to take a PC and install FreeNAS. FreeNAS is exactly what you might expect: a free operating system based on FreeBSD, designed to turn a PC into a high-performance and easily configurable NAS device.

That’s what I do. In my basement, I have an older desktop machine whose only purpose is to share all the disk drives it has attached —  two internal and five external USB drives — to the local network.

While the system runs Linux, it could just as easily run Windows. If you’re familiar with Windows networking and file sharing, that may be the easier option.

And, to be honest, it doesn’t have to be a PC in my basement — it could be any PC connected to my network, even one that’s used in other ways as well. All it has to have is the ability to “share” its disk space in some way: something all modern operating systems support.

In a sense, every PC that can share disk space is a NAS device.

Which is right for you?

So if PCs are just as good at sharing out hard disks, why even consider a NAS?

Well, certainly using something like FreeNAS is an excellent way to extend the life of an older PC. It’s a quick, low-impact approach that can provide shared storage on your network without impacting any specific user’s PC.

If you’re more interested in high performance, availability, and resiliency, then a dedicated NAS device might be more appropriate. 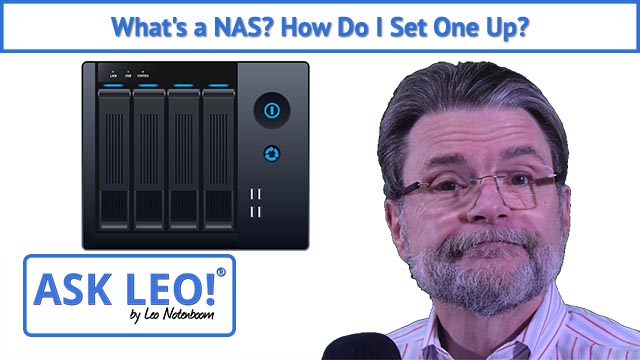 1: Very Linux-like, but with different parentage. Apple’s OSX is based on FreeBSD.