I often talk about computer failures of various sorts and what you should be prepared for: the crash that happens just before you save your document to disk, the failure that renders a disk completely unreadable and unrecoverable, or the computer that dies a true death, taking all of your data with it.

You know the drill. Hopefully, you’re prepared for that.

But by being prepared for that, you’re only ready for half of a somewhat-related disaster.

What happens when your computer … disappears?

Computers can “disappear” for many reasons, from loss while travelling to theft at home. Regular backups protect you from losing data, but you need to take additional steps to protect your data from falling into the hands of a potential thief. Full disk encryption can protect your on-disk data, and two-factor authentication can protect your online accounts. Mobile devices are particularly prone to theft and loss, and should be protected with a PIN code at a minimum.

It’s about more than travel

Typically, we think of a scenario like the traveler who loses his laptop. Perhaps he left it at the security checkpoint1. Or maybe it was stolen out of a hotel room. Or possibly something else happened. The bottom line is that it’s gone.

But that same scenario can play out elsewhere with the same result. Electronics are a popular item for theft and burglary at home and at work. Perhaps you take your portable computer to school or a local coffee house from time to time, where it can also be stolen or left behind.

Regardless of the specifics, just about any computer can disappear — the portable ones as well as desktops.

The loss of data on the computer is perhaps the most easily dealt with.

One of the other ways your computer can “disappear” is that it can simply fail catastrophically.  The device may physically still be present, but as it’s no longer functional, that doesn’t help. Everything on it is gone. No, not all failures are this disastrous and this one isn’t even likely, but it can still happen — and thus, you must be prepared.

That’s what backups are for.

And by being prepared with a recent backup, you’re also prepared for the loss of your computer by other means.

Replace the computer, grab your data from your backup, and life goes on.

What most people don’t plan on is the theft of the data on their lost or stolen computer.

This is where encryption comes in. If you have sensitive personal data on your computer, and especially if it’s on a portable computer of some sort, consider using an encryption tool such as VeraCrypt.

VeraCrypt can be used to either:

I recommend that you not rely on password protection in applications such as Word or Excel, or tools such as WinZip. While they have improved in recent years, I believe they remain useful only to keep honest people honest. If an intruder is determined, such tools are often easily cracked.

Whether you encrypt your entire drive (which has the benefit of encrypting the paging file, temporary files, and everything else) or just a large volume depends on a combination of your degree of paranoia, how you use your computer, and how important the stored data is. Security-conscious businesses and government agencies rely on whole-drive encryption.

Depending on how you have your computer configured and how you use it, it’s possible to extract  passwords (those “remembered” for you by your browser) or other private information. If your computer is stolen while it’s on (or in standby or hibernation), you may have been signed in to various online accounts.  The thief could change your password and steal your account without even needing the password.

This is where two-factor authentication comes into play.

If you have two-factor authentication properly enabled and configured, a thief can’t log in to your account even if he has the password. That’s why I have it enabled on all my accounts that support it.

Two-factor authentication is becoming increasingly popular as more account hacks happen. Google is one of the earliest and most complete adopters, and other services are following suit. Check with your online service providers — email, online storage, password vaults, etc. — to see if two-factor (also called multi-factor) authentication is available.

In recent years, mobile devices have exploded. It seems like everyone has at least one. Checking email, uploading photos, using social media — mobile is everywhere.

And naturally, mobile devices are being lost and stolen.

Mobile devices are a tad harder to secure. The single most important thing you can do for a mobile device you carry with you regularly is to lock it with a pin code (or in some cases, a swipe pattern). Yes, you’ll need to tap out that code each time you wake up your phone, but that’s a small inconvenience compared to giving a thief quick and easy access to the treasure trove of personal data many people keep in their phones.

In addition, both Apple (via iCloud‘s Find My iPhone) and Android (through Google’s Android Device Manager) support remote wiping of lost mobile devices, if set up beforehand. There are also several apps that instruct a mobile device to wipe or self-destruct on receipt of a specially-formatted text message.

The risks of losing a computer or mobile device are easy to overlook. Inconvenience and data loss are the first things that come to mind, but understanding that your data could end up in the hands of a complete stranger is well worth considering.

And well worth preparing for.

This is actually an expanded update to a podcast I recorded back in 2005. 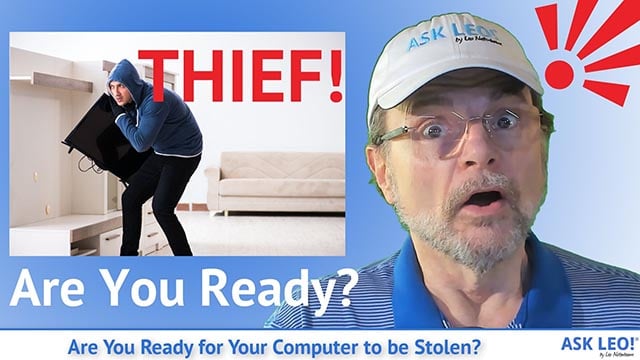 1: Something like 12,000 laptops are lost each week at airports. I have an exceptionally difficult time understanding how that can be. When I travel, my laptop is my life! 🙂

2: Fortunately, my understanding is that this actually isn’t all that common. But the fact is that it can and does happen.

20 comments on “Are You Ready for Your Computer to be Stolen?”