I recently updated my wife's computer again. This was unexpected, but the process reinforced a couple of important lessons.

Back when my wife and I owned a collectible doll shop, I used to joke that technical support had a different priority when you legitimately expected to sleep with the boss at the end of each day.

The doll shop is long gone, but I remain my wife’s IT department here at home. She’s both patient and understanding as I “do things” to our technology, including her laptop.

Consider, for example, its replacement.

My wife has had many computers over the years, often my hand-me-downs which served her needs well. In 2012 I bought her a MacBook Air which worked very well. When battery life and other potential issues became apparent I replaced it with a Google Pixelbook Go, a Chromebook. That turned out to be under-powered for some of her use. She’s now happily using a new Macbook Air with the M1 processor.

Over the years, my wife has had several different computers. From desktops to laptops to the doll shop computers, she’s seen a variety of different machines and taken on no small amount of change. Often they were “hand me downs” of machines I had used. These suited her perfectly, as her needs are less demanding than my own.

Particularly early on, when I was still working at Microsoft, her machine and mine would be PCs running a current version of Windows. Like many of my readers, she also grew comfortable in Outlook Express, and then Microsoft Office’s Outlook, for her email, as well as an occasional instant messaging program to communicate with a growing cadre of friends coming online.

Eventually, it was time for an upgrade.

As outlined in the original article announcing the (perhaps unexpected) purchase, I analyzed what she was using the device for. The bottom line was 90% of her usage was email and surfing the web. Switching away from an email program and relying instead on Gmail’s web interface meant that 90% of her time online she was simply living in a web browser.

The Mac was a wonderfully light, portable machine with reasonable battery life and a clear screen. I maximized what made sense to maximize in terms of RAM and hard disk to increase the odds that the machine would be useful for a very long time. (I’ll come back to this.)

I was not wrong. The Air was her primary machine well into 2020 — a useful life of over 7 years. I’m not at all displeased.

The primary reason for considering a replacement turned out to be some perceived performance and Wi-Fi connectivity issues, as well as the battery life naturally declining with age.

So, in early 2020 I purchased a Google Pixelbook Go Chromebook.

The analysis hadn’t changed much. Most (perhaps even more) of my wife’s online time was spent in the browser. There was certainly nothing Mac-specific about her needs.

I talked about this in more detail in my “Why a Chromebook?” article, but the Pixelbook Go appealed because of my experience with the Pixel line of phones from Google, as well as its smaller and more portable design. Not to mention that it runs Chrome OS — very similar to Android — something my wife was also familiar with on her own phone. All the apps she might need were there.

Here’s where I made an error, though it might be obvious only in hindsight.

Specifically, I did not get the most powerful offering. Instead, thinking that the low-end processor would be enough for “just running a browser”, I went for a base model.

My intentions were good, and I can’t even fault my thought process.

The Wi-Fi connectivity issues I mentioned earlier persisted. I did consider this as a possibility — it was conceivable that the old MacBook Air wasn’t really at fault here, but that my Wi-Fi, which had also evolved over time, was the culprit. Indeed, building out a more serious Wi-Fi mesh network seems to have resolved this and several other networking-related issues.1

Unfortunately, the “perceived performance problem” I mentioned earlier also persisted, and this surprised me.

A lot of experimentation, frustration, trial, and error later, I came to a few unexpected conclusions:

There were three options at that point:

While this was going on, Apple released the new MacBook Air (and MacBook Pro) with their new M1 processor. I watched with mild interest for an assortment of reasons. They certainly looked like nice machines.

Then the reviews started coming in. The machines were exceeding pundits’ expectations in both performance and battery life.

I took the fourth option.

My wife is now happily running her new MacBook Air, and has been for a few months. The machine is snappy. While Facebook can still be frustrating at times, it’s not a Wi-Fi performance issue any longer; it’s Facebook.

The battery life is great. Her computer generally lives in the kitchen, where it remains plugged in as it’s used throughout the day. In the past, I had to leave an extra power supply in our family room so the computer wouldn’t crap out in the middle of the evening if she elected to use it there. That is no longer necessary.

Like the preceding MacBook Air, I ordered this one with maximum RAM, as it’s not upgradeable later. It’s much more than she needs today, but ensures this machine will also be as useful as possible for as long as possible.

Which, as it turns out, might be even longer than planned.

After wiping it and reinstalling the operating system from scratch, and updating to the latest version of Mac OS, I used it as my “that person on TV looks familiar” IMDB-lookup machine. The battery life isn’t an issue, as it’s now always plugged in.

For reasons I’ll explain another day, I then decided to experiment with something else.

Aside from my constantly getting the control and command keys backward, it turns out to be a fine Windows 10 machine. In addition to my frequent IMDB lookups and email, I’m running a small assortment of other utilities that allow me to fiddle with my to-do list, take notes, and do other tasks that turn out to be useful when I’m relaxing in front of the TV in the evening.

Were you to peek in on us some evening while we’re watching the television, you might well notice that we each have a MacBook Air at either end of the couch.3

The lesson here is simply this: going cheap may or may not be an option, but it’s an option you should approach with caution when purchasing hardware that you hope or expect to keep using for any length of time. Spending a little more at the start often means your technology will be useful for much longer than you expect. 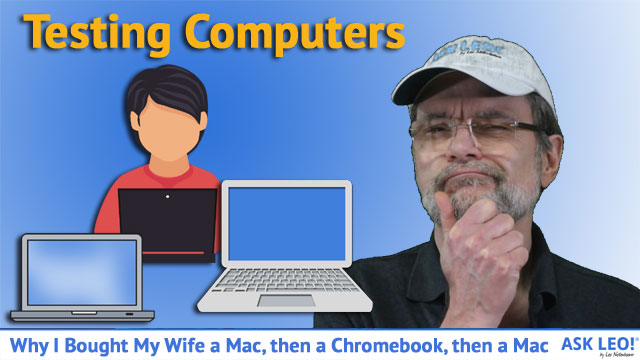 1: I may write it up in the future, but I’ve switched to a Unify mesh network based on commercial grade equipment from Ubiquity Networks.

2: Using Bootcamp, for those curious. I partitioned the hard disk in half, so I can choose to boot MacOS should I want to.

10 comments on “Why I Bought My Wife a Mac, then a Chromebook, then a Mac”