Updates are updates except when they’re not, and the difference matters.

Windows Update can update more than just the Windows operating system. So keeping it up to date is still a good idea.
Applies to Windows: 7
I have a Windows 7 laptop and am still getting updates. Why is that?

You’re not. At least, you’re not getting the updates you think you are.

Many are surprised to see updates still being delivered to their Windows 7 machines. I can think of at least three separate reasons why that might be happening and will probably keep on happening.

First, however, we need to define just what we mean by “end of support”.

Updates after Windows 7 end of support

“End of support” for Windows 7 means the operating system itself no longer gets fixes. Other software, like Windows Security Essentials or Microsoft Office, are technically not part of the operating system and may be supported for a longer time. Their updates, and possibly that of other non-operating system components, continue to be delivered via Windows 7’s Windows Update mechanism.

When support ended for Windows 7, it simply meant two things:

If a failure of some sort is discovered in Windows 7 at this point, you’ll just have to live with it or work around it. The operating system is not going to be fixed.

If you’re using Microsoft Security Essentials as your security software, it may very well still be getting database updates and software updates via Windows Update. In the image at the top of the page, one of the updates I was set to receive in July of 2021 was the “Malicious Software Removal Tool”, or MSRT.

The technicality is that Microsoft Security Essentials is not part of the Windows 7 operating system. It’s a software package independent of Windows 7 that you very likely installed separately long ago.

Even though it’s kept up to date using a Windows 7 tool — Windows Update — it’s not considered a part of Windows 7.

So you’ll probably see the Microsoft Security Essentials updates for however long Microsoft chooses to keep updating that tool.

Depending on the version of your other Microsoft software — Microsoft Office being the most common — it may still be supported. And as a result, those software updates will continue to be provided until support for the product ends.

Microsoft Update is really just Windows Update checking the update status of more software, so it comes through the same interface you’re used to seeing.

One exception to “end of support” occurred when Windows XP Internet Explorer was updated at least once not long after support had supposedly ended. It was an important enough problem at the time that Microsoft made an exception.

I’ve heard rumors that with the demise of Internet Explorer, Microsoft has pushed the latest version of Edge to some Windows 7 machines. Since Edge isn’t part of the operating system, it may continue to be updated for however long Microsoft chooses to do so.

Windows 7 has been out of support for long enough now that I’d be surprised if anything else rose to the level of being an exception and requiring an update. But it’s possible.

Third-party software may continue to support its Windows 7 versions for varying lengths of time. Each will have its own update mechanism, unrelated to Windows Update.

And each will have its own way of notifying you when Windows 7 is no longer supported.

If this article seems hauntingly familiar, it’s because it’s based in part on Why Am I Still Getting Updates for Windows XP?

I expect some day, after Windows 10 comes to its end-of-life, I’ll write another version explaining what’s still getting updated even when that operating system itself is not.

Regardless of which operating system version you run, my advice remains to keep everything as up to date as possible. And that does include taking whatever updates are offered via Windows or Microsoft Update.

Are updates for Windows 7 still available?

At this writing, updates for Windows 7 SP1 are still available. This means that if you install Windows 7, it will be able to bring itself up-to-date by running Windows Update.

Can you still upgrade from Windows 7 to 10 for free?

Yes, the offer to upgrade a valid Windows 7 installation to Windows 10 for free continues to work. Simply visit the Windows 10 download center and follow the instructions to upgrade. 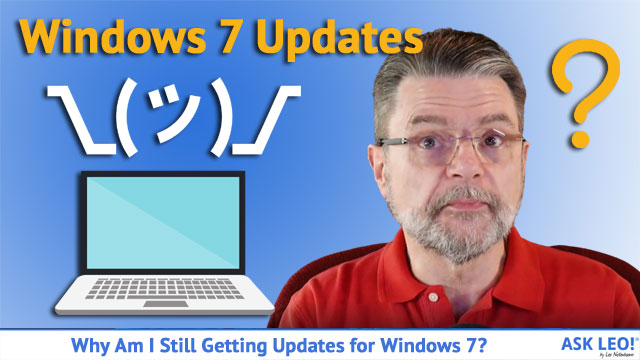 15 comments on “Why Am I Still Getting Updates for Windows 7?”