Microsoft’s product naming frustrates me to no end. They seem to have an incredible knack for picking the most confusing names possible and then changing them.

While the names Windows Security, Windows Defender, and Microsoft Security Essentials all seem innocuous enough, what they mean has changed over time. Sometimes they mean the same thing, and sometimes they don’t.

Security vs. Defender vs. Essentials

In current versions of Windows 10, all security-related items are contained in the “Windows Security” app.

You can run this app by clicking the Start menu and typing “Windows Security”. You can also access it via the “Update & Security” section of the Settings app.

Windows Security includes anti-malware scanners and tools, tools to secure your Microsoft account, firewall and network-related protection, and much more.

It’s a one-stop location for all your Windows 10 security needs.

What was once called “Windows Defender” in Windows 10 (and Windows 8) is now “Windows Security”.

If you click Start and start typing “Windows Defender”, one of the search results will be Windows Security.

One of the other search results, however, will not be.

My belief is that this represents a portion of the software that hasn’t yet transitioned to the new-name interface. One clue is that you can also get to this via the “Advanced Settings” in the Windows Security app’s network settings.

Yes, it’s confusing, but I think it will eventually coalesce under the “Windows Security” name.

Sadly, we’re not done with confusion just yet.

This is where things get weird.

In Windows 7, a tool called “Windows Defender” was only an anti-spyware tool.

With Windows 7, you needed to install an additional anti-virus tool. Microsoft Security Essentials, which I’ll talk about in a moment, was a common solution. Because this additional tool also included an anti-spyware tool, it replaced Windows Defender.

The resulting security solution would be Microsoft Security Essentials with no Windows Defender.

But we’re not done with the Windows Defender name.

Windows Defender Offline was a version you could burn to a CD or install to a USB thumb drive. You would then boot from it and run Windows Defender without having to run the copy of Windows installed on your machine.

Booting from something other than your hard drive bypassed any malware possibly present on your machine. The result was Windows Defender Offline could do a more complete job of cleaning things up.

In current versions of Windows 10, the offline scanner is preinstalled and is called Microsoft Defender Offline. I don’t know why “Microsoft” and not “Windows”, except perhaps to differentiate it from the previous downloadable equivalent.

Finally, we come to the easy one: “Microsoft Security Essentials” has been relatively unambiguous over its lifetime.

Microsoft Security Essentials (MSE) was an all-in-one anti-virus and anti-spyware program. It integrated well with Windows XP, Windows Vista, and Windows 7 and remains1 a free download from Microsoft.

If that sounds familiar, it’s because that’s exactly what Windows Defender is today for Windows 10.

How good is Windows Security?

The Windows Security suite built into Windows 10 has improved significantly in recent years. For most people, it’s a perfectly viable solution for anti-malware scanning as well as other security tasks. No other security software is typically required.

Do I still need antivirus software with Windows 10?

How do I turn on Windows security?

The Windows Security suite should turn on automatically unless other third-party security solution has been installed. You can confirm it’s running by visiting the “Windows Security” section of the Settings app. 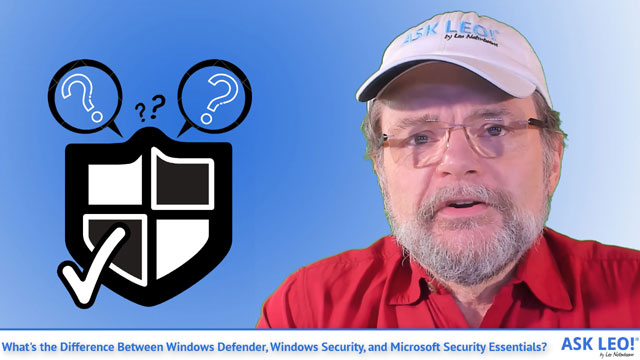 1: As of the most recent update to this article. Its malware database also appears to be updating regularly.