Disk partitioning is one of those topics that generate conflicting opinions.

Some swear that proper partitioning aids performance, makes backing up easier, and is just generally “better”.

Others opt to let Windows sort it all out, believing that improper partitioning might prevent the file system — already optimized for both safety and performance — from operating in the best way.

While I’m certain the truth is somewhere in between, I tend to fall into the latter camp.

I’ll look at some of the pros and cons of partitioning your hard drive, and make a recommendation if, after all is said and done, you’re still not sure.

There are two classic approaches to partitioning a single drive on a Windows PC:

In addition, most contemporary computers or Windows 10 installations come with additional hidden partitions. We’re not talking about those here; they serve different purposes. This discussion is only about the partitions you see in Windows File Explorer when Windows is running.

There are several reasons to consider partitioning a hard drive.

Again, there are several possible reasons.

Once again, the “should I or shouldn’t I?” question gets my most common answer: “it depends”. It depends on you, your data, how you use your computer, and its hardware configuration.

Unless you have a specific reason to partition, don’t bother. Instead:

I used to recommend defragmenting periodically. Windows 7 and later versions automatically defrag hard disks weekly, and SSDs don’t need it at all.

If you have a specific reason to partition, then by all means, go for it. Don’t forget it’s still a single hard drive you’re using, and all your partitions need to be properly maintained and backed up.

It’ll be worth your time to read the comments on this article, as I expect lots of additional ideas to come in. As I said when I started, there are many different opinions on partitioning. You may feel differently than I do. 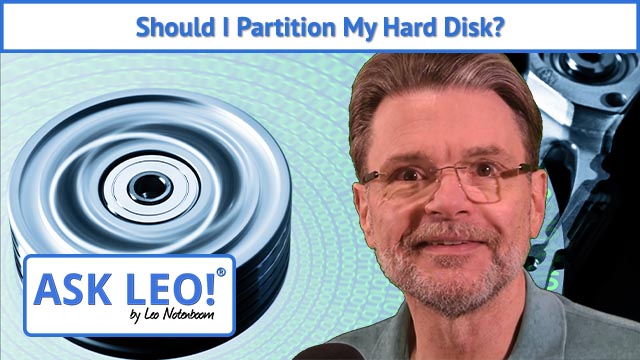 101 comments on “Should I Partition My Hard Disk?”