In what I do, I have to handle pretty large files all the time. In my setup,
I have 3 hard disks:

How would you go about changing the location of the temp folder to E:/ in
Windows XP?

Aside from your small C: partition, you’re describing a reasonably good set
up. By moving your temporary files to E: you should not only get an improvement
in available space on C:, but things might also speed up just a tad.

We’re talking about Windows itself.

Windows has a concept of a directory where it, and other applications if
they so choose, can place files that are for temporary use only.

Fire up a Windows Command Prompt, (typically in Start,
All Programs, Accessories), and in that
windows type SET followed by the Enter key.
Windows will list a number of what are called “environment variables” that make
various types of information available to running programs. Two of them will
look much like this:

TMP and TEMP both specify the directory to be used for temporary files. Both
TMP and TEMP are used for compatibility reasons. In this example they actually
specify “C:\Documents and Settings\LeoN\Local Settings\Temp”, but in 8.3 compatibility
representation.

Changing them is easy. 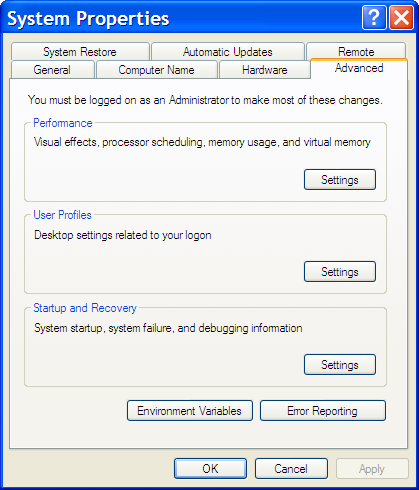 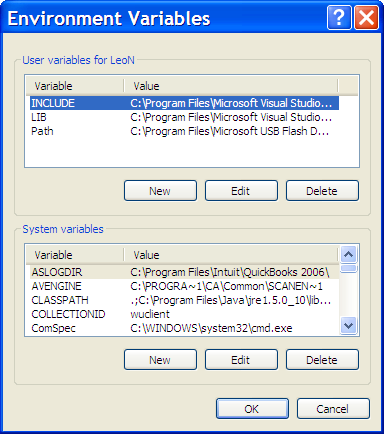 You may see both TMP and TEMP listed in the section labeled User
variables for (account). That’s the common location; each different
login account is assigned its own temporary location.

Personally, I prefer to have a single location for the entire system. So if
TMP and TEMP are present in the top list, I click on each and then click on
Delete. However you can simply edit them, as we’re about to
edit the System copies, if you prefer.

“… some programs can get confused if the temp
directory is set to the root of a drive.”

If you scroll down in the bottom list labeled System
Variables you’ll find TMP and TEMP again. Click on one, and then press
the Edit button: 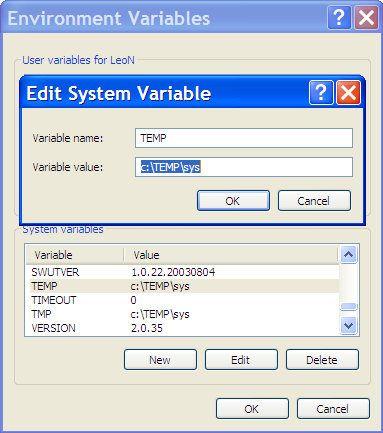 In the Variable value: edit box you can now specify a path
to a directory that Windows and many other programs should use for temporary
files. As you can see, I’ve specified a different directory entirely, but still
on the C: drive. You could specify “E:\” to use all of E: as your temporary
location, but I’d actually recommend creating a subdirectory on E:, such as
perhaps “E:\temp” and using that, as some programs can get confused if the temp
directory is set to the root of a drive.

Be sure and repeat that process for both TMP and TEMP.

33 comments on “How do I change the location of Windows temporary files?”