The System File Checker is a little-known, simple-to-run command-line program. It validates that Window's operating files are undamaged.
Applies to Windows: 11, 10, 8, 7, Vista, XP

In order to prevent malware from compromising critical system components, Windows works hard to maintain the integrity of its files. If you try to replace a “protected” file, you may get a message that the operating system has put the old, approved version back. That’s Windows File Protection, which is now called Windows Resource Protection.

Unfortunately, automated protection doesn’t cover every conceivable situation in which your system files could be damaged. Sometimes it’s as simple as a hard disk error.

As a result, automated checking is nice, but sometimes you need to take matters into your own hands.

SFC scans your system files and confirms they have not been compromised or replaced with unofficial versions. If an unexpected version is found, SFC attempts to restore it from copies or original installation media. Run SFC by entering “SFC /scannow” in an admin Command Prompt or PowerShell.

The premise behind system file protection is that Windows keeps information for critical files — possibly including, but not limited to, the date/time stamp of the file, its size, and its cryptographic hash. When files are “officially” updated, this information is also updated to reflect the new official files.

Every so often, Windows checks all those files to make sure they still match, meaning the time stamp, size, and hash value all match what is expected. If they don’t, something is wrong, and Windows will likely report the error.

Unfortunately, “wrong” can be the result of many different things:

So, what happens when a problem is found?

If you’ve ever searched for a system file on Windows, it’s not uncommon to find several copies:

When system file protection needs to restore a file, it usually tries the original first.

In addition, many systems include a copy of Windows on a restore or recovery partition, and, when all else fails, the original Windows installation media might be used.

In all cases, the repair process also checks that the copy it’s restoring is correct. If it fails to have the expected information, it will be skipped. Because many of those sources are on your hard disk, malware authors attempt to replace or damage them all to prevent the repair process from working.

SFC is a command-line tool that checks that all of the files covered by system file protection are as they should be, and tries to repair those that are not. It’s a good utility to run when you suspect system files have been somehow corrupted, or if you just think there’s something wrong with your system.

After confirming any UAC prompts, type “sfc /scannow” (that’s “sfc”, a space, “/scannow” without any quotation marks) at the prompt and press Enter.

SFC scans your system immediately. It can take several minutes to run.

If you have installation media, such as a DVD, you might have it available in case SFC needs it to replace a damaged file.

While it’s not documented as being required, I’d reboot your machine if SFC replaces any system files. I like to be sure the file replacement actually takes effect.

Microsoft has more detailed SFC documentation, including more options to check at boot time, how to control the size of the system file protection cache, and so on. There is also Windows Resource Protection documentation, which covers the mechanism Windows uses to try to keep your system files (and a few other things) safe automatically. 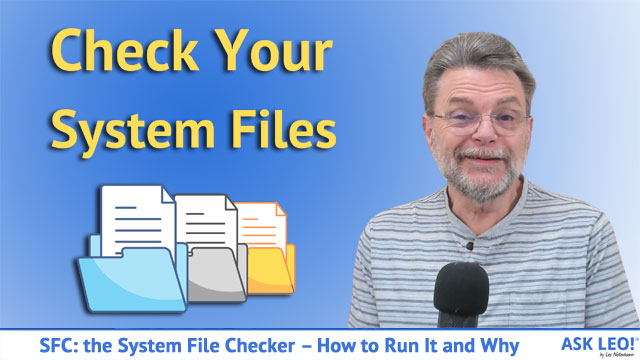 20 comments on “SFC: the System File Checker – How to Run It and Why”