Sometimes even the best software can’t protect you.

Even with up-to-date anti-malware tools, you can still fall victim to malware. I'll explain why by comparing your computer to your... bathroom?

Why would an exploit not be caught or detected by my antivirus program? If not detectable, how much “damage” can the exploit actually do if users follow prudent operating precautions? Would System Restore be usable if infected? I also follow your advice and routinely image my Dell laptop.

We need to clear up a little terminology, but your question is a good one: how can malware get past anti-malware programs and infect your PC?

And more importantly, what can you do to protect yourself?

Let’s define some terms with what I’m thinking is my silliest metaphor ever, and then talk about how to stay safe.

A vulnerability in software isn’t a bad thing in and of itself. It’s kind of like a hole in a bathroom wall: as long as no one’s looking through it, there’s no damage done.

Naturally, you’d like to have the problem fixed and the hole repaired (i.e., you’d like your software to be updated to remove the vulnerability), but as long as the hole hasn’t been found by anyone, it’s not putting you at risk. It shouldn’t be there, but as long as no one knows about it, all is well.

An exploit is like someone finding the hole and looking in at whatever’s happening in your bathroom. If the hole is big enough, they can even reach in and steal personal things or flush your toilet when you’re not looking.

And yes, I just compared spam to whatever you flush down your toilet.

Now to factor in anti-malware tools.

The term anti-malware is really a catch-all for a couple of different approaches.

The problem, of course, is that these cops are only as good as the information they have. If the anti-spyware cop is unaware of the fact that video cameras can also be placed in the light fixture, they won’t check that. If the anti-virus cop doesn’t have the photo of the Peeping Tom discovered elsewhere this morning, he won’t recognize him.

That’s why I so often insist that you have not only up-to-date security software (cops who know all the important tricks of the trade), but you also make sure to update their databases of malware (the list of places to look and malcontents to look for) consistently (or let it happen automatically).

We can extend the metaphor further. Not all cops are the same; some are better at seeing certain kinds of things than others, others get better data from their head office, and so on, meaning that some anti-malware tools are better at catching certain things that others.

And some are just incompetent.

Ultimately, though, not having up-to-date tools with up-to-date information is one way malware makes it into your system.

Unlike a bathroom wall, the vulnerabilities (or “holes”) in software are often not obvious or easy to discover. It’s not uncommon for a vulnerability to exist for years before someone stumbles across it and develops a way to exploit it.

To stretch the “computer software is like a bathroom” story even further, the holes in your wall are very difficult to find. Depending on the quality of the original builder, there may be easier-to-find holes, but those are often found and fixed relatively quickly.

And here’s the scary part: hackers are like someone who spends all day and all night looking at your bathroom wall from the outside, hoping to find a hole no one else has found before. It’s not a new hole — it was there all along — but it is a new discovery, and often termed a new vulnerability.

Or sometimes they’ll find a new way to use a previously known hole that hasn’t been patched yet.

Either way, as soon as they’re successful, they create malware that exploits the fact that your bathroom wall (the software on your computer) has an unpatched hole.

“So just plug the holes!” I hear you yelling.

Exactly. The problem is, as I mentioned above, the holes can be extremely hard to find.

But once they’re found, the hole is patched by updating the software on your machine to versions without those holes.

Another issue is that fixing a hole can damage the wall, sometimes to the extent that a new hole is created elsewhere. By that I mean fixing a bug in software can unintentionally introduce other bugs. Thus, the benefit of fixing a known hole has to be weighed against the risk that doing so might create another hole we won’t know about.

The bottom line here, though, is that having out-of-date software — software with known holes fixed by updates you haven’t downloaded yet — is another way malware can find its way onto your machine.

An experience with Java a few years ago is a great example of a widespread and (then) newly discovered vulnerability.

To continue our now-tortured comparison:

The common advice was to remove the bathroom completely (uninstall Java), use a different bathroom (use alternate tools that don’t use Java), or avoid using a bathroom altogether (don’t do whatever you were doing that required Java).

The metaphor breaks down at this point, because while most of us may not need Java (the advice remains to uninstall it unless you know you need it), we all need to a bathroom.

The advice for avoiding software exploits is the same as it’s always been.

In other words, keep your bathroom clean and don’t invite strangers in.

And, yes, even after doing all that, there’s still the possibility of a hole you don’t know about being found and exploited before all the defenses are updated.

To answer your second question: what can malware do?

Malware can do anything it wants.

Naturally, the specifics depend on the size of the hole being exploited and what’s available on your computer, but it’s safest to assume that once a vulnerability on your machine is exploited and an infection occurs, all bets are off.

That’s one reason that I so strongly recommend regular backups. If your machine is infected today, restore to yesterday’s backup, and the infection is gone. Period.2

System Restore can sometimes help, but there are two problems with it:

Try System Restore if you like — be sure to run full and updated anti-malware scans thereafter — but it’s not something I feel confident relying on.

As for me, I’m moving my toothbrush.

For more strange metaphors to help clarify technology, subscribe to Confident Computing! Less frustration and more confidence, solutions, answers, and tips in your inbox every week. 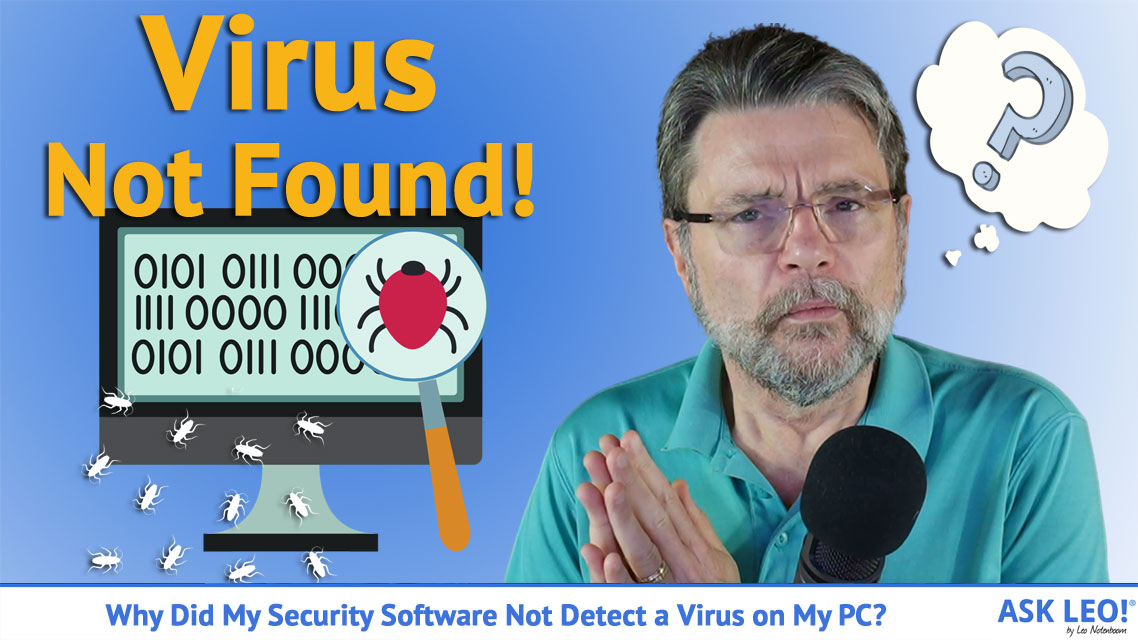 1: Honestly, the distinction between “spyware” and “virus” has pretty much disappeared — we now refer to them collectively as malware, for malicious software. The two different approaches to detection, however, remain.

2: This is where the metaphor really breaks down. I mean, who keeps a daily backup of their bathroom?

18 comments on “Why Did My Security Software Not Detect a Virus on My PC?”