Another vulnerability has been discovered in Java; if Java is installed on your machine, malware authors can exploit it to infect your computer with something as simple as your visiting a malicious or hacked website.

As I write this, there is no update to Java, which means that there is no fix. Technically that makes this a “zero-day exploit”.

The fix that most experts, including myself, are recommending is to remove Java from your machine. Chances are you don’t actually need it anyway.

But before we go further, we have to do the old “Java vs. JavaScript” dance.

Java and Javascript are two different and unrelated things

Because of another exceptionally poor choice of names, there’s always instant confusion when we talk about Java because people often confuse it with JavaScript.

That’s wrong. Java is not Javascript. They are completely unrelated to each other.

Javascript: (not to be confused with Java) is a computer programming language that is most commonly used to … continue reading.

From the Ask Leo! Glossary

Java: (not to be confused with Javascript) is a general purpose programming language designed, as much as possible, to … continue reading.

From the Ask Leo! Glossary

While JavaScript may have its own set of issues from time to time, that’s not what this is about, at all. This is about Java.

“
However, you may have Java installed if you visited such a website, or installed such an application, even once …

While you almost certainly need JavaScript, it’s quite likely that you do not need Java.

Java is used only by certain applications and websites, and the majority of websites don’t use it.

However, you may have Java installed if you visited such a website, or installed such an application, even once. The installation was required to make that site or application work, but it’s not practical to somehow automatically uninstall it after your visit or after uninstalling the application because there’s simply no way to know if it’s also needed by some other application that remains or site that you visit.

It gets complex very quickly. As a result, once installed, Java remains installed until you explicitly uninstall it.

And that’s exactly what I recommend you do. 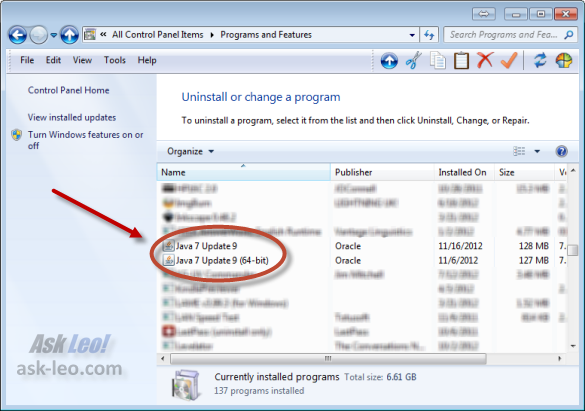 Look for lines titled “Java”, “Java VM”, “Java Update” and the like, all with the Java logo as an icon.

Right-click on each, and select Uninstall.

Didn’t find any Java items in the Programs list? Then you’re done before you even started; you didn’t have Java on your machine to begin with.

Disabling Java in your browser without removing it can be a complex task. I strongly recommend that you follow the process above to uninstall it from your computer completely.

However, as we’ll see in a moment, that might not be practical.

Rather than reinvent the wheel, here are instructions from Sophos’ Naked Security site on disabling Java in Internet Explorer. At the end of their instructions are links to similar instructions for Firefox, Chrome, Safari, and Opera.

What if it turns out I need Java?

After successfully uninstalling Java using the instructions above, you may encounter this when you visit a website that requires or uses Java:

Depending on the browser, you may instead or also see a notification telling you that “Java(TM) is required to display some elements on this page.”

If you run a program on your PC that uses Java, you’ll see a similar error message (exact wording will depend on the program) indicating that Java is required, but not present.

You have a decision to make.

In my order of preference:

In any of the circumstances that involve re-installing Java, make certain to always keep Java up to date. Letting it update itself is the preferred approach, if offered.

Why is this such a mess?

The current situation isn’t an indictment of Java as a programming language – it actually is a pretty cool language, and ironically was itself designed with security in mind. One of its original selling points (‘write once, run everywhere’), while technically not 100% accurate, is a very popular reason for many to have adopted Java as a technology.

No, the devil here is certainly in the details.

All software has bugs, make no mistake. Even your favorite never-had-an-issue program that you use every day, whatever it is and whatever computer it’s running on, has bugs.

And so does the implementation of Java. It’s not the programs written in Java that are at issue (although they certainly have bugs of their own). The issue here is in that common runtime – often referred to as the “Java VM” or “Java Virtual Machine” – I mentioned earlier. It’s just software too, and like all software, it has bugs.

It might even have more than average, although I’m not going to say that for certain.

And it’s installed on a lot of machines.

As Java has become more popular over time, it’s become worth the time of hackers to see if there are bugs that haven’t been fixed that they can exploit. It’s popularity for hackers may not be based on millions of people actively using it, but rather millions of computers that happen to have Java installed because a website requiring it was visited once upon a time.

In response to some of the comments:

Update to the Update

Several people have noted that:

I have to stress that this is about much more than just a single vulnerability.

As it turns out, within days of the bug fix release hackers announced that they had found at least two more vulnerabilities in Java 7.

In my opinion the track record for Java vulnerabilities is poor enough that I continue to strongly recommend that you uninstall all versions unless you’re certain that you need it. (And uninstalling it to find out if you need it is also, in my opinion, a valid approach.)

Javatester.org, includes a partial list of applications and sites that use or require Java.

How do I disable Java in my web browser?, instructions from Oracle.