I want to send email to a person I’m talking to on a dating service, but I don’t want them to be able to get my real email address and find me. What do I do?

This is a relatively common question.

It also makes for a fairly common news headline when someone who thought they were sending an anonymous message via email gets found out.

Anonymous email is conceptually fairly simple, but once you dive into the details – the details that perhaps investigators and law enforcement might take advantage of – things get complicated quickly.

With no real negative implications implied, let me ask you: how paranoid are you?

Hiding your email address is, by far, the easiest thing of all …

… create a new email account at one of the free email services, like Outlook.com, Gmail, Yahoo!, or others.

Use completely fake information when setting it up. Fake name, fake location, fake birthday, fake everything. Make sure there’s nothing about that account that is in any way tied to you – even the email address that you choose.

Your “real” email address isn’t part of it, so it’s never sent. The email comes from this completely fake account.

You can keep it for a while to see if there’s any reply, if that matters to you, or you can immediately abandon it.

It seems simple because it is. And it answers exactly the question you asked: how to hide your email address.

But, as the late Paul Harvey would say, it’s time for the rest of the story. 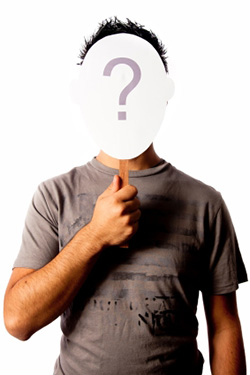 There’s More to Email than Addresses

IP addresses scare a lot of people. Most are concerned that, given an IP address, just about anyone can easily locate the person who is using the computer at that IP address.

However, law enforcement can get very close. They can, with the help of the ISPs involved, locate the home or business to which an IP address has been assigned.

Your IP address is often included in the administrative information (aka “email headers”) included with every email you send. It’s always sent if you use a desktop email program, and it’s sometimes included with email sent using web email providers.

For many people, knowing the home or business associated with an IP address is as good as identifying who sent the email.

So, if you are concerned that the authorities or other investigative services might be involved, setting up that fake email account from your home might not be the best thing to do. It could still be identified as coming from your home.

Go somewhere else – the further away from home, the better. A library across town, for example, or perhaps a coffee shop with free WiFi.

One way many people advocate sending anonymous communications is via an anonymous proxy or gateway. One example is TOR, The Onion Router. Like an onion, a connection made through TOR is routed through several different computers, often all over the planet. Each step of the transmission is encrypted in such a way that the path through TOR cannot be traced, and most importantly, the source cannot be identified.

As you might imagine, using a service like TOR adds significant latency – meaning it can be quite slow.

In addition to actual networking proxy services, there are online services that will send messages on your behalf, presumably without any information that could be used to personally identify you.

The biggest concern with any anonymous proxy or service is security and privacy. How will the provider respond when faced with legal action requiring them to expose the source of any particular communication? Many will not hand over such information, and some are even set up so that they can’t.

But you’re trusting them at a very fundamental level. Personally, that’s something that I would have a difficult time doing.

There May Be Even More to Email than IPs and Addresses

Some email programs include the name of the computer on which it’s being run in the email header.

For example, the name of the computer I’m typing on right now is “NOTENQUAD”. That’s how I identify it on my local network. Naming your computer is achieved in a simple setting in computer properties.

When I send email using my desktop email program, it is possible that the name – “NOTENQUAD” in my case – is included in the email headers. This happens either as an association with the IP address on my local network (NOTENQUAD is the name assigned to the machine’s local IP address), or it’s simply included as a standalone header by the email program.

Now, the name of the machine email was sent from isn’t necessarily enough to identify you by itself. But used in conjunction with other information, it could be.

You might send your boss regular correspondence on a daily basis, but if, as part of investigating an anonymous email he received, he determines that it came from the same machine that your normal email comes from – i.e. your machine – that’s a bit of a give-away.

In fact, correlating the characteristics of one anonymous email message with an email message from a known source is a common way to narrow down, if not identify, the source of the message. Everything from nuances in the email header to your actual writing style and common spelling and typographic errors can all contribute to a so-called “anonymous” email being identified as yours.

Your original question involved online dating. As long as there’s no reason to get the authorities involved, I think it pretty darned unlikely that you need to do anything more than set up an anonymous email account for this purpose. In fact, it’s a very reasonable precaution for this and several types of online connections to people you don’t know, and it’s easy to do.

On the other hand, if you’re a political dissident, or involved in corporate espionage or other significantly more sensitive situations involving significantly more sensitive information, you may want to think long and hard about the best way to make those contacts. If powerful entities have a reason, there are often techniques, some of which I’ve touched on above, that can be used to possibly identify you if you’re not careful.

96 comments on “How Can I Send Anonymous Email?”