My laptop has gone blue screen for no reason and I can’t restart it!

Turn the computer on, wait a while, and … blue screen.

Let’s review the steps to get your Windows 10 machine working again.

Start with a backup, even now

I know this sounds counterintuitive, but because some of the steps we may take could cause data loss, we want to start with a full backup of the machine.

How do you do that if it won’t even boot?

The trick is to boot from something else: namely, the rescue media you create using tools like Macrium Reflect or EaseUS Todo. How To Back Up a Machine that Won’t Boot covers the topic in more detail.

I advise not skipping this step for two important reasons:

That last point is critical for some of the approaches we’ll use below, and with the advent of the UEFI BIOS, it’s also not as obvious as it once was. How Do I Boot from CD/DVD/USB in Windows 8 & 10? has more.

One of the (normally hidden) partitions on your hard disk is the Windows 10 recovery console. If the hard disk hasn’t been damaged and that partition is intact, we may be able to boot directly into that.

The old trick of holding down F8 or SHIFT+F8 during the boot sequence no longer works.1

Interestingly, it appears that if booting up fails enough times in a row, the system attempts to give you recovery options on its own. Given that you’re experiencing a blue screen, that should be enough to interrupt the boot process. Try to reboot four times in a row, failing each time, and the recovery screen may be displayed.

If it appears, click on See advanced repair options to enter the recovery console we’ll use below.

If it doesn’t, it’s possible your system has made it “too far” into the boot process for that to be an option. In this case, I’m told that powering off your machine earlier in the boot process, again, four times in a row, may get the desired result. I’m reluctant to recommend this, since it seems like it could do more damage if disk writes are interrupted at a bad time, though it may end up being your only option.

If you’ve created a recovery drive for your system, boot from that. It should take you directly to the recovery console.

If you don’t have one, download and create the installation media for your edition of Windows 10 and boot from that. When you start up again (after selecting your language and keyboard), the next screen will include an option to Repair your computer.

Click that to enter a “Choose an option” screen.

Let’s explore this menu of options in a little more detail.

Honestly, given the symptom — a blue screen preventing your system from running — I’m not hopeful this option will repair anything. However, there is always a chance, and of the options in front of us, it’s the least disruptive to your system.

Or, to put another way: it doesn’t hurt to try and you could get lucky.

Startup Repair examines a number of aspects of the system boot process, and if it finds anything amiss, it tries to fix it. If that happens, reboot your system from its hard disk, and see if your blue screen has disappeared.

If not, return to the troubleshooting page by the same path that got you here originally.

I’m not a fan of System Restore, but that’s due to what I consider its unreliable and misleading nature. In cases where it works, it can be helpful. I just find that you can’t count on it being there when you need or want it.

This could be a case where it works, so try System Restore next. If you have a recent restore point, restore the system to that and then reboot from the hard disk and see if the blue screen persists.

If it does then return to the Advanced options troubleshooting page once again.

This step restores your entire hard disk from a system image taken using what Windows 10 calls the “Windows 7 backup tool”.

If this doesn’t fix the problem, we may be looking at something more severe.

Your own backup image recovery

If, however, you’ve been following my well-worn advice to regularly protect your system with a system image backup using another tool — perhaps Macrium Reflect or EaseUS Todo — then you can use those tools to the same effect. Reboot your machine from a rescue or emergency disk created with the tool you use, and then restore your most recent image backup and hope the blue screen goes away.

The last resort is to reinstall Windows from scratch.

Yes, this is painful, but it’s yet another reason we started with a backup: you won’t lose any of your data.

If, however, the installation process fails — with a blue screen even — or the newly installed Windows 10 blue screens, then this isn’t likely to be something repaired in software.

Time for a technician

Especially if you’re able to restore a system to a backup taken prior to the blue screen, and it still happens again, there’s a good chance it’s being caused by a hardware problem of some sort.

Failing hardware can manifest in many different ways, and a blue screen is certainly one of them. Unfortunately, exactly what may have broken will generally require that the machine be examined by a technician. 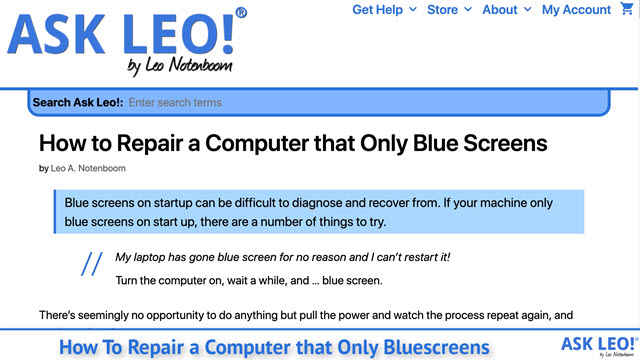 1: I’m told this is due to the additional security put into place by the UEFI BIOS.