Something you never need to do.

For some reason, many people's gut reaction to a malware infestation is to consider getting a new computer. That's unnecessary.

I give up. My computer has been infected with malware — lots of it — and I can’t seem to get rid of it all. I’m ready to throw in the towel. Should I just get a new computer? Wouldn’t that just solve everything?

You should never need to buy a new computer because of malware.

I regularly hear from people with machines infected with varying amounts of malware. Their computer is crippled, and they just want it to work.

If that’s you, and you’re at the point where you’re considering getting a new computer because of it, STOP.

Before you get out your credit card, allow me to clear up some confusion and possibly save you some cash.

Repairing a machine infested with malware doesn’t require purchasing a new computer. Malware is just software, and software can be erased. If traditional anti-malware tools fail to erase the malware, then a complete reformat and reinstall of Windows, or a restore to an image backup taken prior to the infestation, will.

The fundamental concept getting lost here is the difference between computer hardware and computer software.

Your computer — the box, the power supply, the hard disks, the monitor — are all hardware. They’re physical things you can see, touch, and feel.

Windows, your applications, your data, your pictures, and anything else stored on your computer are all software. They’re simply data — nothing more than a collection of ones and zeros — stored on magnetic, electronic, or optical media.

Malware is software. It’s nothing more than data. Data crafted to cause your computer to misbehave, but data nonetheless.

And data can be erased.

Before you resort to any of the steps in this article, check out How Do I Remove Malware? to make sure you’ve exhausted all options.

When you get a new computer, besides all that brand-spanking-new hardware, you’re also getting completely new software. That new computer comes with a new install of the operating system. New installations of the applications you use will either be pre-installed on the machine, or you’ll re-install applications you’ve downloaded or purchased yourself.

The bottom line is that when you get a new computer, you’re getting completely new/refreshed software.

Unless you reinstall the malware, the malware is gone, because you’ve started over from scratch.

You don’t need a new machine to do that.

Getting rid of malware without resorting to a new machine

Replacing your computer because of malware is like getting a new toaster because the bread was moldy. Yes, you’ll probably get fresh bread at the same time, and all will be well. But you could have just cleaned your toaster.

You can clean your computer.

“But that’s what I’ve been doing!” I can hear you saying.

There are several approaches to malware removal. One approach is to run anti-malware tools and follow instructions to remove the malware while leaving your system otherwise (hopefully) unaffected. That’s a common first step … and second, and third, and fourth step, until your patience wears out. And it’s probably what you’ve been doing.

It’s also where many people give up.

Here’s the 100%-guaranteed five-step approach to removing all malware from your machine without buying a new computer.

The malware is gone. You have all new software on your computer. It just works.

And it’s all that’s required, even after the worst malware.2

Naturally, prevention is the best approach to malware: don’t get it in the first place. Internet Safety: 7 Steps to Keeping Your Computer Safe on the Internet has a great overview of the steps you should take to keep your computer — your existing/old computer — safe.

But stuff happens, even to the best of us. That’s another reason I’m such a strong proponent of regular system-image backups. If your machine becomes infested with malware, there are two scenarios where a backup can completely save the day:

In either case, the malware is gone.

And you didn’t have to buy a new computer.

Maybe you needed an excuse?

There are many reasons to get a new machine. Recovering from a malware infection is not one of them.

If you just want a new machine, then get a new machine. Don’t wait for a disaster to give you some kind of excuse. Switching to a new computer is a much more pleasant experience if you’re not simultaneously trying to avoid transferring over the malware that got you into some bad situation.

You’re also much more likely to make a reasoned choice if you’re not under the gun to get a new machine.

So, sure, get a new machine. Just don’t kid yourself into thinking that you have to do it because of malware. 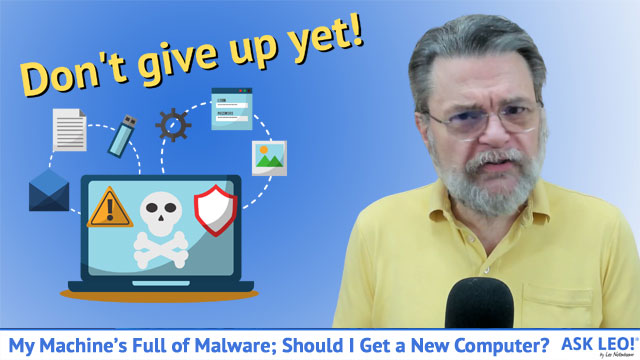 1: Or, alternately, use system recovery disks provided by the manufacturer. Or restore a system-image backup that you took prior to the infection, or one you took immediately after getting the machine originally.

2: I know that some will bring up malware that infects/damages the computer BIOS. While they exist, they are extremely rare. It’s extremely unlikely that that you have this problem. And if you do, the BIOS is just another form of software and can typically be replaced/reset without buying a new computer.

73 comments on “My Machine’s Full of Malware; Should I Get a New Computer?”