"Limited connectivity" displays when your computer is having problems completing its network configuration. It might as well mean no connectivity.
I have recently started receiving “limited connectivity” messages at our vacation condo. Looking on the web, I’ve found a jillion ways to fix this problem and can’t believe all the advertising. I’ve found that cycling the repeater that is in our condo will usually clear this problem. What causes it and what do I do when cycling the repeater doesn’t work?

“Limited connectivity” happens when your computer can connect to the network . . . but can’t.

Not very helpful, I know, but accurate. Your computer was able to connect the network in one way, but was unable to complete the next step.

“Limited connectivity” happens when a computer can make an initial connection to a network, but gets no response to its request for an IP address and further connection information. With limited connectivity, the computer can’t really communicate with others on the network. Rebooting the router, which is responsible for the response, resolves the issue most often.

It’s that last one that needs a little explanation.

An IP — Internet Protocol — address is how your computer is located on its network.

Most computers are configured to get a “dynamic” IP address using DHCP. That means rather than permanently assigning a specific IP to the machine, it “asks” for an IP address when it connects to the network.

Dynamic IP addresses are simpler to configure and allow for IP addresses to be re-used when the machines they were assigned to are taken offline.

A DHCP request is very simple: your computer broadcasts to all the devices on its network,

“Would the DHCP server listening please give me an IP address?”

Want more on DHCP? Check out: What Is DHCP?

On each such network, there should be one device listening for the request — the DHCP server. It, then, responds with something like:

“Here ya go: you will be 192.168.1.4. By the way, when you want to talk to others on your network, here’s some more information, and when you want to send something to the internet, send it here.”

In other words, your computer gets both its IP address and instructions on how to talk to the rest of the world.

Your computer is ready to communicate with the world.

But what happens if no one responds?

“Would the DHCP server listening please give me an IP address?”

And there’s no response.

When that happens, the computer repeats the request a few times and then gives up.

When it gives up, it declares that you have “limited connectivity”.

Connectivity is “limited” because your computer will make up an IP address.

There are scenarios where, if you know what you’re doing and you’re willing to jump through some hoops, you can force communication while you’re in this state by doing things like manually configuring TCP/IP settings on your network card. But it’s complex and is not a long-term solution at all.

So what do you do?

DHCP is usually handled by your router, or in some cases, your broadband modem. If you have a single PC connected directly to the internet, it may also be handled by your ISP.

90% of the time, what you did is exactly right: reboot your router.

Sometimes routers just get confused and need to be rebooted. It’s silly, and in an ideal world shouldn’t be needed, but it is what it is.

Wireless access points — those which are not routers but simply provide the wireless connectivity to a wired network — can sometimes also hiccup and fail in such a way as to cause this problem. I believe it happens when the wireless side of the device keeps working while the wired connection is, for some reason, broken. Again, a reboot of the device typically clears this up.

In either case, it’s easiest to then reboot your computer(s) to force them to request new IP address assignments from the now-functioning router.

If the reboot resolves the problem but it reoccurs quickly, I would check with the manufacturer of that device to see if there is new firmware available for it. Even though we think of routers and access points as hardware, they are in fact small computers running software, and all software can have bugs. Sometimes those bugs don’t show up until something outside of the device changes.

If your firmware is up to date and the problem repeats frequently, I would try a new router or access point to see if that clears things up. 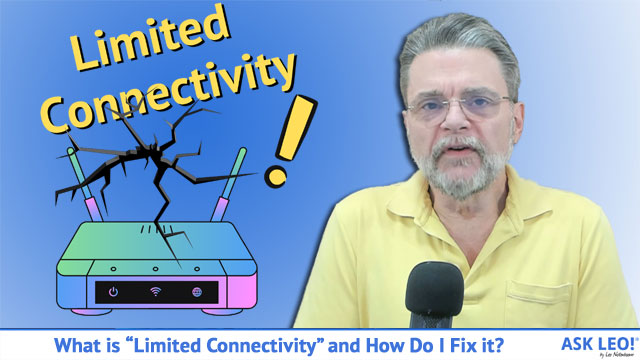 67 comments on “What is “Limited Connectivity” and How Do I Fix it?”