When it kinda sorta looks like yours, but it’s not.

It's not uncommon to get unexpected email sent to an email address similar to your own. I'll review why that is and what to do about it.
My email address is {example}@gmail.com and about a week ago I started receiving emails (mainly advertising and spam but all from USA, and I live in Portugal!!) that were sent to {example}@aol.com. I tried sending an email to this “other” {example} but got it returned saying the address doesn’t exist. Yet that is the address that the senders are using and they are somehow coming to me. Is this some sort of phishing or someone being naughty? Have you come across this before?

In the question above, I’ve used “{example}”1 as a replacement for specific email addresses. In each case, the part before the “@” was the same; it was only the part after “@” that was different.

This is spam, nothing more. Mark it as spam and move on.

There are several ways this can happen, but there is one approach spammers use that explains most clearly what they’re up to, and why.

Email to a similar address

Spammers often use email addresses similar to yours to get your attention and pique your curiosity. If you don’t see your real email address on the message, it’s likely to have been BCC’ed. Regardless, it’s spam, and should just be marked as spam in your email program or interface.

The parts of an email address

Every email address consists of two parts: the part before the “at” sign (“@”), and the part after.

Combing then two, then, an email address like “leo@askleo.com” means that the account called “leo” on the “askleo.com” mail server is the intended recipient.

Even when the part before (“leo”) is the same, if the parts after (“@askleo.com” or “@randomisp.com”) are different, then they are two completely separate and unrelated email addresses.

That unrelated part is important. While “leo@askleo.com” and “leo@randomisp.com” seem like similar email addresses, they really have nothing whatsoever to do with one another.

When spammers spam, they’re trying to get your attention so you’ll read and act on whatever they place in the body of their message. One way to do that is to send “To:” email addresses similar to yours.

One way spammers do this is by using email addresses already on their lists or email addresses discovered in data breaches. They take the first part (e.g. “leonotenboom”) and then send spam to that account on all the major email services.

Let’s say my email address — {example}@askleo.com — is discovered in a breach.

Some spammers will then proceed to send spam to similar email addresses on other domains:

and so on. They might send to hundreds or thousands of email addresses all beginning with {example}, regardless of whether or not those accounts actually exist.

This is why replying to spam never works: the spammers never see it and wouldn’t care if they did.

And since spam is so cheap for spammers to send, it only takes one success for the hundred- (or thousand-, or million-) message campaign to be a success.

One thing that confuses people is that their real email address isn’t anywhere on the message they got. As the question states: “[this bogus address] that the senders are using and they are somehow coming to me. ”

No, it’s not getting forwarded. As I said, the bogus address and your real address are not related in any way. Period.

Only one of the email addresses is exposed on the “To:” line. It got your attention because it’s an email address similar to your own, but it’s not yours.

The email you got was BCC’ed along with all the other variations. You wouldn’t see it, because you can’t see who was BCC’ed on an email, but you would get it.

The email looks like it was sent to someone else (because it was), but you got it because it was also sent to you.

There’s no forwarding going on

The concern was that the message was being sent to an incorrect @aol.com email address shown on the “To:” line, accepted there, and then somehow automatically forwarded or redirected to the correct email address @gmail.com.

No. That’s not what happened. The message was not diverted.

Skepticism is always called for

As you can see, spammers play games to mess with you. They’ll do anything to make things look legitimate — or at least suspiciously legitimate enough to warrant your attention.

Don’t fall for it.

Spam is spam, no matter what games they play.

And curse spammers under your breath,2 if you like.

Can someone have the same email address as me?

Why am I getting emails that are not mine?

You can appear to get emails not intended for you in two cases: 1) someone makes a mistake entering an email address and happens to enter yours in error, or 2) spam. Spam is commonly sent in such a way that your email address will not appear, and the email will look to be intended for someone else. In that case, simply mark the spam as spam and move on. 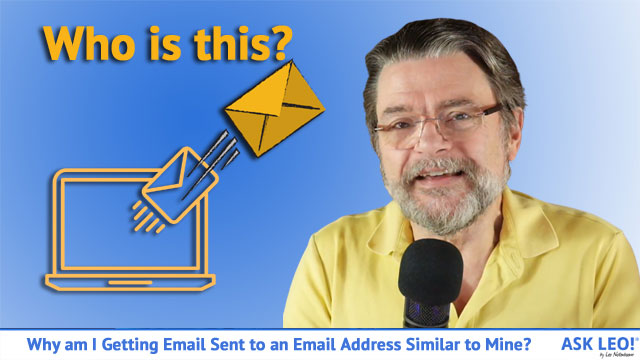 1: Again, a reminder that “{example}” is a placeholder for a real email account like “leonotenboom”, “leo”, or whatever the first part of your email address might be. I use this to avoid inadvertently listing someone’s real email address. Other examples, like lnotenboom@askleo.com or lnotenboom@randomisp.com, are on domains I control, and hence I have no such worry.

30 comments on “Why Am I Getting Email Sent to an Email Address Similar to Mine?”