A couple of weeks ago, I wrote what was effectively an open letter to Microsoft entitled, “Microsoft, We Deserve Better“.

The pragmatic reality is that I don’t expect it, or any of dozens of similar missives posted across the internet, to have much effect. If Microsoft is listening (they probably are), they are unlikely to act on it, as their business priorities are clearly elsewhere. Even if they do act, they won’t act quickly — it’s no longer in their nature.

Which leaves us with a very vexing question: what the heck are we supposed to do?

The gun is always loaded

One of the first rules of firearm safety is that you always act as if a gun is loaded. Above all, you never assume that it is not.

In my missive to Microsoft, I alluded to Windows 10 Updates being similar to playing Russian Roulette. The same rule applies: whenever you’re about to take a Windows Update, assume that the gun is loaded and it’s your machine’s turn to get shot.

What does that mean in practical terms? Two things, really:

These are things that we should all be doing anyway, especially the backing-up part, but it’s clear that these two steps have become significantly more important given Windows 10’s recent update history.

Unfortunately, I often hear from people complaining about Windows 10 updates even though they’ve never experienced a problem. Instead, they’re reacting to the headlines.

In other words, headlines lie. While Windows Update does have its problems, it’s not affecting nearly as many people as the headlines imply. The same applies to comments on articles like my letter to Microsoft: the people most motivated to participate are those who’ve experienced a problem, no matter how few of them there might be. The fact that the vast majority of people are not experiencing a problem goes unreported.

Again, I’m not saying there’s no problem. Windows 10 updates have problems, without a doubt. It’s just not as likely to affect you, specifically, as all the headlines lead you to believe.

Use what control you have

One of the frustrations Windows 10 users experience is a lack of control. Windows updates seem to happen on schedules we ultimately have no say about. Indeed, it’s one of my pleas to Microsoft that complete control be returned to the user.

But that doesn’t mean you have no control whatsoever.

Another point of control is to look at updates a little differently. Rather than letting Windows itself choose when to download and install updates, do so more proactively on your own schedule. When you have time, and could have the time to deal with a potential failure, manually check for updates and take them. The only caveat is that you’ll want to do so often, so as to have it happen before Windows own random schedule kicks in.

If Windows 10 is too problematic for you, or you just can’t stand the negative hype and uncertainty, there’s one more thing you also have under your control: showing Windows 10 the door. Alternatives include:

Honestly, I’m not seeing a lot of people take this option. Most, having made it to Windows 10, are opting to stick it out. And let’s face it: as I mentioned above, most aren’t having a problem to begin with.

I totally get that it’s frustrating to have to deal with this. Things should just work. Microsoft should do better.

Unfortunately, “should” helps no one. The reality is, we have what we have, and getting angry or frustrated over how it does or doesn’t meet our expectations is just energy wasted. It helps no one, and only raises our blood pressure and decreases our life expectancy.

There are more important things to life than railing about how messed up things seem.

Use the control you have to take the actions listed above. If something bad happens, you’ll be as prepared as you can be.

Instead, be thankful you have that backup to restore from. Things could have been so much worse without it. 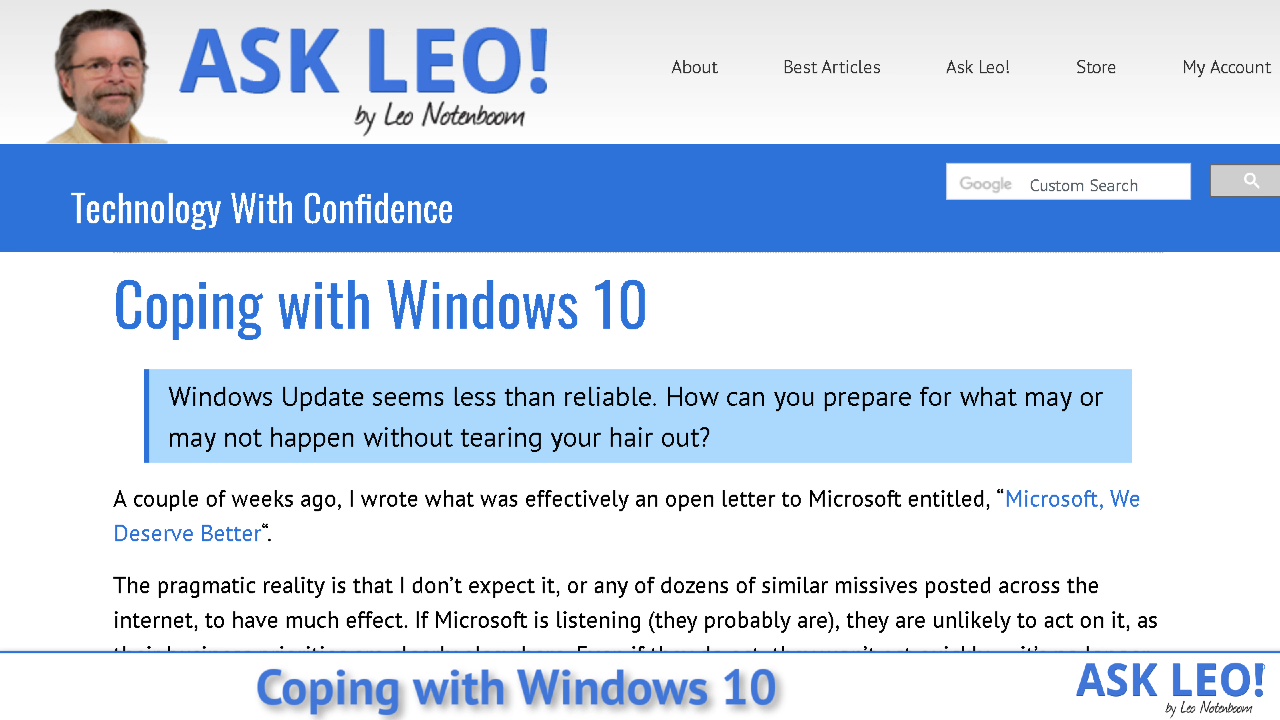