Off isn’t always off.

Hacking a turned-off computer requires a few mistakes on your part. It's unlikely, but possible.
In general, can a PC with no remote software be hacked if it is powered off? The power supply and the internet cable are still connected to the PC. In my discussions with others, 50% say yes, 50% say no. An internet search was also divided in response with no agreement.

Conditions have to be just right for a turned-off computer to get hacked. I’ll describe those and show you how to prevent it.

Computer hacked if it's off?

In order for a turned-off computer to be hacked, it must first somehow be remotely powered on, either by the “Wake on LAN” feature (which is normally disabled) or if standby mode resumes unexpectedly. Then the computer must also be vulnerable in some way while it’s running. As long as you follow common security best practices, the risk is small.

In general, the answer is no, you cannot hack into a computer that’s been turned off.

Unless two conditions are met, the PC cannot be restarted and hacked from outside, even if you leave it connected to the internet and to power.

One of those conditions involve a feature called “Wake on LAN”. If it is enabled, it allows a PC to be remotely turned on and booted. When enabled, the network adapter for the computer is not turned off completely. Instead, it monitors for specific instructions arriving via the network telling it to wake up. When those instructions are received, the computer turns on and boots.

The other condition is nothing more than a lack of security. If the PC turned on remotely did not have appropriate security software installed and was not behind a firewall, then it is conceivable the PC could be hacked remotely.

Another reason I avoid standby mode: Why Does My Network Not Work After Resuming from Standby?

It’s not uncommon for a laptop to be placed into standby mode only to wake up on its own a while later. The exact reasons this happens vary — I can’t give you a simple explanation.1

There is a simple workaround: if you find your laptop waking up on its own and it concerns you, don’t use standby.

If standby works for you, great, but I generally avoid it for a variety of reasons, including this one.

Hacking a turned-off machine is extremely unlikely. Two things have to line up for it to happen.

Can a computer be hacked if Wi-Fi is off?

There are two ways a computer can be hacked if Wi-Fi is off: if malware had been downloaded prior to turning off Wi-Fi, or if the computer is connected to something via technologies other than Wi-Fi, including Bluetooth, a physical ethernet cable, or others.

How do hackers get into computers?

The most common way hackers currently gain access to computers is via malware delivered as an email attachment that is opened by an unwitting user. Once run, the malware can do anything, including installing remote-access software, back doors, and more. The second most common way is falling victim to the “remote support” scam and explicitly giving the hacker remote access to your computer, once again allowing them to do and install anything.

Can someone hack into my computer remotely?

It’s exceptionally rare for a well-protected computer to be hacked remotely. First, it must be on and connected to the internet. If it’s behind a firewall such as almost any router it’s protected from remote internet connections. The only way it can still be hacked is if malware is already present on the machine, or if another machine on the local network is hacked, and the machine hasn’t been kept up to date and has unpatched security vulnerabilities.

How can you tell if your computer’s been hacked?

It can be exceptionally difficult to tell if your computer has been hacked. Most malicious software tries to go unnoticed, which means it tries very hard not to do anything that would be detected. Things to watch for would be unexpected CPU usage, disk activity, or more commonly, excessive network usage.

What to do if your computer is hacked?

A computer hack is nothing more than malware of some sort having been installed on it. Thus if you determine that your computer is hacked you would proceed the same way as you would for malware being present: run up-to-date scans, possibly run additional tools to perform more malware checks. In the worst case you may need to reinstall the operating system from scratch. 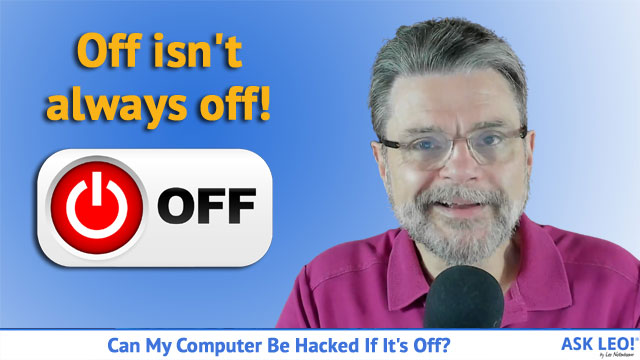 1: Or any explanation at all, really. It seems really, really random.

4 comments on “Can My Computer Be Hacked If It’s Off?”