Wi-Fi has only become more important as more devices and online activities become essential at home. I'll review some of the things to investigate as you search for better Wi-Fi.
My WiFi supports 802.11 a/b/g/n. I want to know which is actually being used, and if it is not optimal, what can I do to improve it?

The a/b/g/n are all different variations of the 802.11 Wi-Fi protocol. Which gets used is mostly out of your control.

On the other hand, there are definitely several steps that can improve your Wi-Fi performance at home.

Wi-Fi is, at its core, radio. As a result, it’s susceptible to various radio-related problems including interference, placement, frequency, and channel selection. Solutions include careful equipment choice and placement, upgrading antennas, or adding Wi-Fi repeaters or access points. Finally, a reminder that wired connections are almost always faster the Wi-Fi.

The terms “router”, “access point”, and “hotspot” are often used interchangeably, even though technically they mean different things. For the purposes of this discussion:

You may have a single physical box that includes both, or they can be separate devices. While you’ll generally have only one router, you can have multiple wireless access points.

As I mentioned, 802.11 a/b/g/n (and a bunch of other letter combinations) are nothing more than different protocols under the 802.11 umbrella. Some are quite different from one another, and they have different characteristics.

Some are faster but more susceptible to interference; others are more robust but slower. Some are older and supported in almost every Wi-Fi device you may have, while new variations are being developed and released over time and may not be supported across the board.

You can see which protocol is currently in use in Windows by running a Command Prompt (or PowerShell), and entering:

This will display an assortment of information about your connection.

In the example above, you can see (next to “Radio type”) that my wireless interface is connected using the 802.11n protocol. This displays whatever protocol was negotiated when your Wi-Fi was connected.

And it is a negotiation.

This audio may bring back memories for some.

That’s the sound of a modem connecting to the internet in the days before broadband. What you’re hearing is the local modem and the remote modem negotiating what audio protocol to use. There were several to choose from, and the choice was mostly based on compatibility (both ends had to support the protocol) and the quality of the sound. The resulting protocol could range in supported speed from 300 baud (bits per second) to a then blistering 56,000 bps.

The same concept happens when you connect using Wi-Fi. Your Wi-Fi adapter and the WAP negotiate which protocol to use based on what they both support and the quality of the radio signal they’re experiencing at that moment.

I’m not aware of a way to manually select which of the various 801.11 variants will be selected1. The negotiation should select the best protocol for the environment at the time. It’s possible that the protocol will be re-negotiated from time to time as conditions change, but that’s generally transparent.

Better Wi-Fi in your control

With all that out of your control, what remains in your control is to give your Wi-Fi an environment that allows it to make the best possible selection.

Much of it boils down to removing or reducing things that interfere with the radio signal, as well as giving the radios at either end the strongest signal and best reception possible.

The further apart your WAP and computer are, the weaker the Wi-Fi signal between the two. The ideal placement, then, reduces that distance as much as possible.

In the home, this usually means figuring out a central location between all those devices and placing the WAP there. This might involve moving your router there, if it includes the WAP hardware.

Placing your WAP in a central location is the first, best thing to do if you can. It maximizes the strength of the radio signals being received by all devices.

There’s an issue with respect to placement that can invalidate the “put it in the middle” rule of thumb, and that’s interference.

Sometimes moving a WAP to a location slightly further away can avoid interference and result in better Wi-Fi overall. For example, if your WAP sits next to a cordless landline phone, then a phone call can interfere with Wi-Fi performance. Microwave ovens are also notorious interference-generators.

In fact, almost any electronic device can interfere with wireless networking signals. Moving your WAP, your computer, or, if possible, the source of the interference, can help.

Interestingly, it doesn’t have to be an active electronic device interfering with a radio signal. Large metal objects — even aluminum building materials — can cause problems.

Since it’s not always possible to point a finger at an interference source, one of the best things you can do is experiment with different locations to see what works well for you.

Wi-Fi operates on two separate frequencies: 2.4GHz and 5GHz. Some protocols and WAP make these transparent, using whatever works best, while others force you to make a choice. For example, the router provided by my ISP shows two separate Wi-Fi access points, one at 2.4GHz and one at 5GHz.

5GHz is generally faster, but is more sensitive to obstructions and distance. If you have the option, try “the other one” from whichever connection you normally use, and see how it performs.

Within a given frequency, Wi-Fi protocols operate on assigned channels. Depending on your WAP and your wireless adapter, you may be able to select a different connection or channel with a stronger signal, or one less prone to interference.

The best way to determine what’s available is to use a Wi-Fi analyzer app. There are a couple in the Microsoft Store for Windows 10, and you’ll find mobile equivalents in the Google Play or Apple stores.

These utilities show available networks and their relative signal strengths as well as what channels are being used (or possibly over-used).

Changing networks is as simple as selecting a different network in Windows. Changing channels, on the other hand, depends on the specific WAP and wireless interface you are using. Check the documentation for each.

The better the antenna, the better the radio’s ability to both listen (receive) and send (transmit). As it turns out, this is true for almost all types of radio communications, not just Wi-Fi.

Many WAPs have detachable/replaceable antennas. One of the things to look for, then, might be larger replacement antennas for that device. Often replacement antennas are simply twice as long, which may noticeably improve signal quality, resulting in better Wi-Fi. If you go this route, make sure to look for antennas designed to work with your specific router.

Laptops and mobile devices, on the other hand, often have built-in, inaccessible antennas. (Desktop computers, if they include Wi-Fi, may have a connector to which you can attach an external antenna.) In cases where the antenna is inaccessible, there’s little to be done, other than perhaps using an external USB Wi-Fi adapter instead — ideally one to which you can attach a larger external antenna.

As I mentioned, you can have more than one WAP, and it’s often the right solution to extend or increase the range of your wireless network.

You can add a WAP, wired to your router. This generally gets you the best results overall.

You can add a wireless repeater. This requires no additional wires, but since it uses two wireless connections (back to your WAP and forward to your computer), it can be a little more sensitive to radio signal issues.

A third option is similar to adding a WAP, but instead adds what’s called a “mesh” network. These are two more WAPs that are themselves connected on a separate (non-Wi-Fi) wireless connection to provide Wi-Fi coverage throughout your house.

As you can see, there are several things to consider when attempting to improve the Wi-Fi connectivity in your home. Given how much we’ve come to rely on it, doing so might well be a worthwhile investment.

In fact, I’ll even say it’s the first thing worth considering.

Sometimes the best Wi-Fi is no Wi-Fi at all. 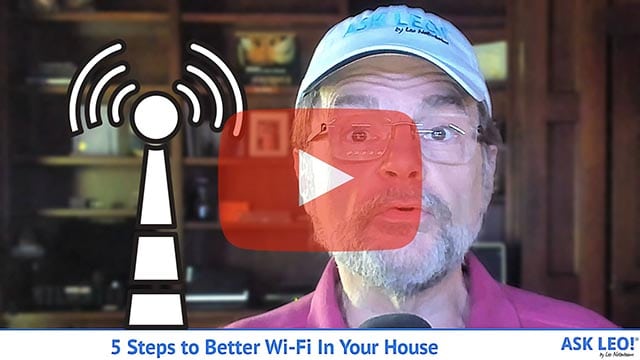 The Ars Technica semi-scientific guide to Wi-Fi Access Point placement is an exhaustive guide to many of the issues when deciding where to place your Wi-Fi access points.

If you found this article helpful hopefully your Wi-Fi is faster (or you’ll at least understand what happens next), then I’m sure you’ll love Confident Computing! My weekly email newsletter is full of articles that help you solve problems, stay safe, and increase your confidence with technology.

How can I boost my WiFi signal in my home?

One of the best ways to improve or boost the Wi-Fi signal in your home is to add an additional wireless access point, connected to your router via ethernet, and then place it and your original access point in separate locations so as to cover your home equally. A Wi-Fi repeater can also often be used, but won’t improve things quite as much. Without adding hardware the best thing to do is to review the location of the access point and place it somewhere that is centrally located, and free of nearby electrical obstructions and interference.

Will a better router improve WiFi?

A better router can improve Wi-Fi, but only if the router includes a wireless access point.  Replacing a device that is only a router that uses a separate physical access point is unlikely to improve wireless speeds or coverage.

What is better, Wi-Fi or LAN?

LANs, or Local Area Networks, are often based on wired connections which are almost always better than Wi-Fi wireless connections. Wired connections don’t have problems with electrical or radio interference, and are generally just faster to start with. Some Wi-Fi protocols can be as fast as wired, but only in ideal conditions. If performance is important prefer wired connections over wireless whenever possible. 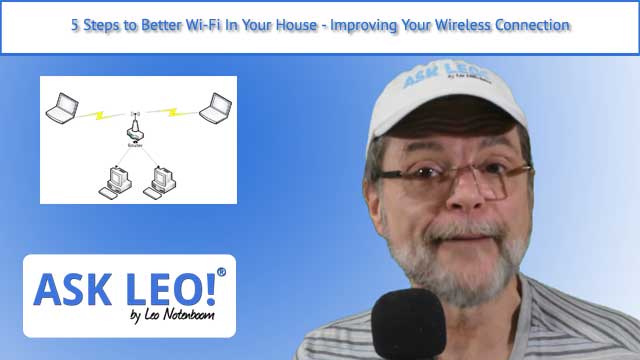 1: Other than disabling the others in your network interface’s driver, if that’s even possible. Naturally, this isn’t recommended.