Know how long you have.

Microsoft publishes its end-of-support schedules well in advance. To stay both current and safe, it would be wise to plan for that turnover.
Leo, we know that support ends for Windows 10 eventually. What do we know about other versions of Windows?

We know quite a bit, particularly since the end of Windows 10 and the release of Windows 11 have been announced.

Microsoft maintains a very public list of its end-of-support dates and expectations.

First, you can find Microsoft’s public list at Lifecycle FAQ.

… though some dates are definitely included.

‘Windows 8.1 and earlier’ end of support

Everything prior to Windows 8.1 is no longer supported. The operating system will still run, of course, and you can continue to use it — you just won’t get any updates.

Windows 8.1 support ends on January 10, 2023. This is what was called “extended” support, meaning Microsoft will only fix things that are security risks or bugs that could result in serious data loss.

Prior to announcing Windows 11, Microsoft announced that the final support date for Windows 10 would be October 14, 2025.1

But the reality is a little more granular, and, depending on how often you update, sooner.

Each half-yearly release of Windows 10 is supported for 18 months from its release date. As long as you update, you’ll “reset the clock” to 18 months with each release. If you don’t take a feature release for over 18 months, then Windows will complain, and you’ll stop getting updates to Windows.

The combination of the 18-month support window and the final support date of October 15, 2025 implies the last feature release for Windows 10 will be 18 months earlier, around April of 2024.

Windows 11 isn’t even out yet, so it’s a little early to talk about the end of support, but it’s worth noting that the rules are changing there too.

New versions of Windows 11 will be released once per year, and both Pro and Home editions will be supported for 24 months from each version’s release.

What does end of support really mean?

There’s always confusion about exactly what “end of support” really means. In short, it means that there will be no more updates, no more bug fixes, and no more security issues addressed.

The biggest issue is the lack of security fixes. This puts additional responsibility on you to use the internet safely and take the security of your machine seriously. You should already be doing this, of course, but the additional safety net of operating system support will be removed if you continue to use it past its end of support date.

How long will Windows 10 last?

Given that Windows XP is still in use by some diehards some 20 years after its release, it’s safe to say that Windows 10 will last a very, very long time. In terms of formal support, however, Microsoft will stop providing updates to Windows 10 as of October 15, 2025.

What happens when Windows 10 reaches end of service?

“End of service” is synonymous with end of support. When Windows 10 reaches end of support, Microsoft will simply stop providing updates or bug fixes — including fixes for any subsequently discovered security issues. Windows 10 will continue to run on supported hardware indefinitely. 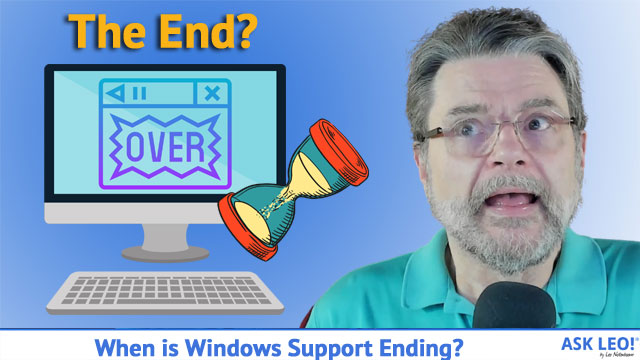 1: An upcoming article will discuss whether this change represents deception in Microsoft’s original positioning of Windows 10.

12 comments on “When is Windows Support Ending?”