A couple of weeks ago, I described how I got my wife and a friend new computers.

Each got a Google Pixelbook Go, and so far, everything’s been working well.

What I didn’t tell you, however, is what happened to their old computers. I took them. I’ll review what I did immediately, and what my plans are for these old computers.

Back up the old computer

This probably seems completely counterintuitive, since by definition the old computer is no longer needed, but my first step is always to create an image backup of the hard drive if possible.

In my experience, people often don’t realize what they have until it’s gone1. Only then do they realize there was some important document or other information on it they really wish they’d kept.

Yes, in an ideal world, the computer’s previous owner would have done this step, but I do it anyway.

In the case of my wife’s old MacBook Air, I simply made sure to let Time Machine run to completion, and then saved the external hard disk in a desk drawer. After enough time has passed, I’ll repurpose the drive.

For my friend’s old Dell laptop, I booted into a Macrium Reflect recovery USB stick (created on my main computer), and used that to create a backup image onto an external hard disk. I then copied that image file to my collection of old machine image files for safekeeping.

With that out of the way, what happens next depends on the machine.

Assuming the old computer is functional, my next step is to install an operating system.

The other reason, of course, is that running the newly installed operating system may be the beginning of the old computer’s new life.

In the case of my wife’s Mac, I used its built-in reinstall function to reinstall the operating system from scratch, and brought it up to the latest supported edition of macOS: Catalina. It’ll probably get used as an occasional travel laptop due to its small size and weight.

I decided to use the older Dell, a 15″ Inspiron 3531 originally shipped in 2014, as a testbed. I installed CloudReady, a version of Chrome OS that can be installed on PCs, which is free for personal use. Time will tell if this is a viable setup for this machine or if it’s not up to the task.

If an old computer isn’t up to the task of running a current operating system — either because it’s under-powered by today’s standards or it simply doesn’t work and isn’t worth repairing — it’s time to scavenge and recycle.

My first step is to remove the hard drive, both for security reasons and for potential re-use. If I was unable to access or erase the hard disk with an operating system install, I’ll connect it to a different computer if at all possible.

If it’s working, I use Windows to format the drive. I don’t select “quick format”, so the formatting process overwrites the entire drive. If it’s of sufficient capacity, I’ll either place it into an external USB enclosure for use, or set it aside in my collection of working drives for similar use in the future as needed. If it doesn’t meet either criteria, off to recycle it goes.

If the drive doesn’t work and I’m unable to overwrite any of the data on it, I add it to my collection of broken drives slated for physical destruction2.

It’s not as common for laptops, but before I send an old computer off to be recycled, I look it over for components worth scavenging. On desktop PCs, that might include memory sticks, expansion cards, or even power supplies. With laptops, the options are more limited — often only power supplies and power cords are worth salvaging — but it’s still worth a look.

The final step is to take whatever’s left to an appropriately qualified electronics recycler. They will also review the machine for repurposing, but most then dispose of the electronics in a responsible manner3.

What I don’t do

You may notice there’s one thing I don’t try to do: keep the existing installed operating system.

There are a variety of reasons, including:

The bottom line? When it comes to an older or second-hand machine, aside from keeping a backup for those “just in case” moments, the hard disk should be erased and you should start over with a clean installation.

If you found this article helpful, I’m sure you’ll love Confident Computing! My weekly email newsletter is full of articles that help you solve problems, stay safe, and increase your confidence with technology. 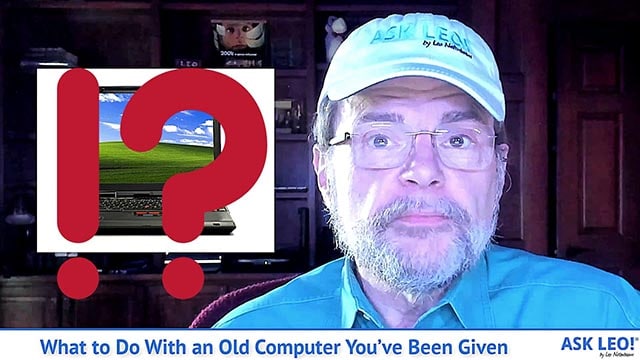 1: True of life in general, I suppose.

2: I used to have a drill press that was useful for drilling holes in the drives, but any destructive technique that exposes and seriously damages the platters of the drive will do. As a bonus, I find the process can often be quite therapeutic.