It’s rarely what you think it is.

Often, when people find their posts or comments removed or altered from websites they visit, they're quick to claim their right to free speech has been violated. That's rarely the case.

Yes, there are rules and even laws, but it’s an incredibly complex issue.

The Internet and Free Speech

The internet is not an entity, and there are no rules or laws that span it completely. Actual laws vary, often dramatically, from locale to locale. Free speech, when afforded by law, does not mean you have the right to use someone else’s venue for your message. Their platform; their rules. You can, however, set up your own platform (website, newsletter, magazine, streetcorner). The First Amendment only covers what the U.S. government can or cannot do, but does not prevent, say, website owners from setting up more restrictive rules of their own. Regardless of the situation, free speech does not guarantee you access to any particular audience, or any audience at all.

I could be wrong. I don’t think I am, but I could be. (Which, by the way, applies to everything I’ve ever said or published. :-) )

One problem is those laws are not global in nature. In reality, they’re different for each of the hundreds of countries in which internet users live.

To keep things simple, we’ll say that you, I, and the website are all within the United States.

That’s what free speech really is, at least to me: the ability to set up your own pulpit and say what you want. Free speech does not mean you have the right to use someone else’s venue for your message.

And it doesn’t make a difference that you can’t reach my audience to make your point from your site. Freedom of speech does not guarantee an audience.

If you get one, fantastic. I have no right to reach them via your venue, either.

The amendment starts with the phrase, “Congress shall make no law…”. If no law was made, or you weren’t arrested, or a court decision wasn’t involved, then the first amendment doesn’t apply.

And as unfair as it is, that site owner had every right to do so. In many ways, it really sucks, because it prevents me from communicating with the other users of that site.

As distasteful as it is, the website owner’s ability to pick and choose whom they allow on their site is also an important form of freedom of speech. 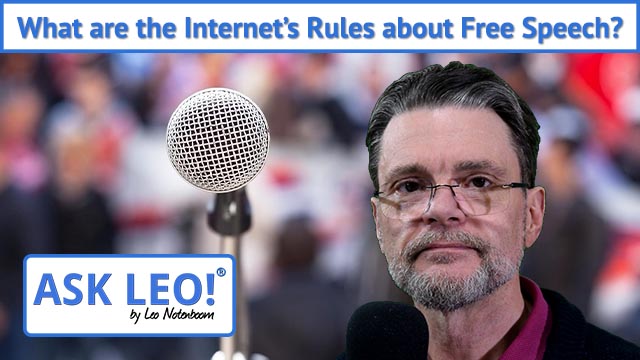