There are those who believe anti-malware applications aren’t needed. While I disagree with that as an absolute statement, if you really know what you’re doing — deeply — then it may be possible to be relatively safe on your own.

It’s not something I advise at all, since it relies on being 100% right 100% of the time when it comes to identifying and avoiding potential threats. Things have become much too complex to rely on that kind of accuracy.

Not only do I advise running anti-malware tools, I run them myself.

The real problem is something else entirely.

All the security software in the world can’t protect you from yourself. It’s important to remain skeptical, and pay attention to the warnings that your security tools  give you. Don’t bypass them based on the fake promises of malware authors.

The real problem is, even with those tools in place, there’s no way to avoid what’s been called the Dancing Bunnies Problem1.

It works like this: if users receive an email saying, “Click here to see dancing bunnies”, a significant number of them are going to circumvent any and every protection the system might have in place.

They want to see dancing bunnies, dammit, and nothing’s going to get in their way.

That’s one form of what’s called “social engineering”: promise something you know will cause people to bypass security measures so as to get you whatever you really had in mind.

At that point, it doesn’t matter what the ideal operating system is or even what the best anti-malware tool is. We’ve all seen or heard of users who very carefully and determinedly dismiss, ignore, or otherwise bypass every warning and every roadblock put in place to keep them safe, simply to see those dancing bunnies.

Don’t be that person.

Pay attention to your tools

Pay attention to what security tools and measures tell you. If your anti-malware tools throw up a warning, STOP. Yes, it could be a false positive, though most often it’s not. It could be an annoyance, but it’s an annoyance meant to keep you safe.

Do some research before you proceed. Read the messages your anti-malware tool is giving you, as well as any additional information it offers. Search the internet to see what others’ experiences have been in your situation. Ask a trusted adviser. Get more information before proceeding.

Your security tools are warning you for a reason.

The cost of failure in scenarios like this can be very, very high.

And it’s extremely likely that there are no dancing bunnies at all, no matter what you’ve been promised. 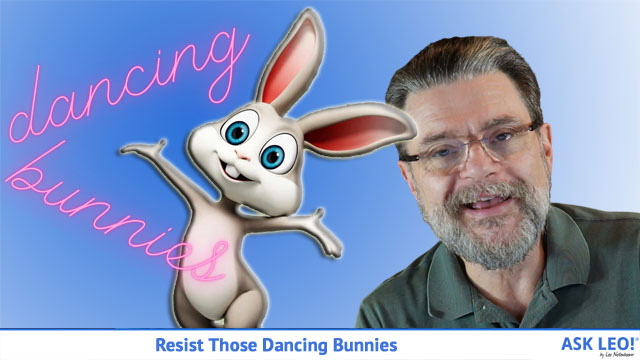 1: Larry Osterman, a Long time Microsoft developer who started there a year after I did, posted some years ago discussing dancing bunnies.

27 comments on “Resist Those Dancing Bunnies”