I keep hearing about “firewalls” for my computer and that there are different types. Do I need one? If I do, what kind of firewall do I need?

Yes. You need a firewall. It’s simply too risky to let your computer sit “naked” on the internet unless you really know what you’re doing.

A firewall protects you from uninvited outside connections reaching your computer over the internet. This protects you from network-based malware. There are both hardware and software firewalls. Your router acts as a firewall, and the Windows 10 firewall is on by default. Together, they’re probably all you need.

Firewalls defend against a class of network-based threat constantly (yes, constantly) attempting to attack your computer. Those threats are stopped cold by a firewall.

In your car, a firewall is the “wall” of metal between you and the engine. Its purpose is to prevent engine fires from reaching you.

A firewall for your computer is much the same, except the engine — the network you’re connected to — is always on fire. The point of a firewall is to keep you from getting burned.

A firewall protects your computer from network-based threats.

Almost all computers connected directly to the internet are under constant attack. Malware on other machines, hackers, botnets, and more are waging a slow but persistent war, probing to find unpatched vulnerabilities. If they find one, they infect the machine they’ve found, or worse.

The basic concept of a firewall is simple: it filters out certain types of network traffic from ever reaching your computer.

Traffic you want to reach your computer:

Other traffic you definitely don’t want:

A firewall knows the difference.

If you look at the sets of examples above, they differ in one important aspect:

That’s an easy distinction for a firewall to make.

The router’s job is to “route” data between your computer(s) and the internet. It also allows you to share an internet connection among many devices.

Routers watch for connections initiated by your computer reaching out to resources on the internet. When a connection is made, it keeps track, so when a response comes back, it knows which of your local machines gets the data.

That makes your router a powerful incoming firewall.

Software firewalls are programs your computer runs. They operate as close to the network interface as possible, and monitor all your network traffic.

In addition, some software firewalls can be configured to monitor outgoing traffic. If your machine becomes infected and malware attempts to “phone home” by connecting to a malicious site, or tries to infect other machines on your network, a software firewall can warn you and block the attempt.

Windows 102 has a built-in software firewall. It is turned on by default.

The Windows firewall is primarily an incoming-only firewall.

Choosing and setting up a firewall

I recommend using a router as your firewall. Since it’s very likely you already have one, you’re done.

Routers are common, and a requirement for anyone who has more than one device sharing an internet connection — which is all of us.

If you’re running a reasonably current version of Windows, the firewall is probably on, and it’s fine to leave it on all the time, even if you’re behind a router. It has little impact and saves you from remembering to turn it on when you travel or have not-so-trustworthy guest on your network.

That’s why I said earlier you might have two firewalls already: your router and your Windows firewall. And that’s quite OK.

What firewalls can’t do

It’s important to remember that a firewall can’t protect you from everything.

A firewall protects you from threats arriving via malicious connection attempts from elsewhere on the internet. A firewall will not protect you from things you invite onto your machine yourself, such as email, attachments, downloads, and removable hard drives or flash drives. 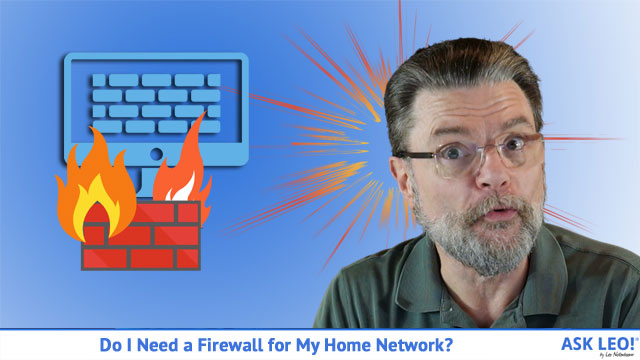 1: It may be combined with a modem, which converts your internet connection’s technology into an ethernet connection, and/or with a wireless access point, giving you Wi-Fi connectivity. Or these may be three separate devices.

2: And Windows 7, and 8, and 8.1. I believe in Vista and prior you needed to enable the firewall yourself.

50 comments on “Do I Need a Firewall for My Home Network?”