You could be making things worse.

RAID is a valuable technology for improving disk speed and fault tolerance, but it is in no way a replacement for backing up.

Do you think RAID 1 is a viable alternative for backing up?

RAID is not back-up technology and should never be considered a replacement for backing up.

I’ll review what RAID is, and most importantly, what it is not.

RAID and its uses

RAID — Redundant Array of Inexpensive Disks — is a technology used to increase either the reliability or speed of hard-disk access, or both, by configuring multiple disks to act as a single disk drive. RAID is not a replacement for backing up, as it provides no protection for other types of hardware failure, malware (including ransomware), or user error.

RAID is an acronym for Redundant Array of Inexpensive1 Disks.

Using RAID technology, multiple physical disks are configured to act as if they are a single disk.

There are several ways the disks can be arranged, but they all boil down to improving one or both of two things:

So-called “RAID arrays” of multiple disks can be managed either of two ways: using a dedicated hardware RAID controller, or RAID can be implemented in software by the operating system.

RAID 1 (which is what you’re asking about) uses what’s called “mirroring” to improve the reliability (or more correctly, the fault tolerance) of a disk drive.

The two drives appear as a single device. Whenever data is written to the logical drive that your operating system sees (perhaps C:), that data is simultaneously written to both physical drives by the RAID controller.

Should either drive fail, the other is still present and available. The RAID controller will run in single-drive mode until the failed drive is replaced. Some RAID controllers allow this to happen without powering down at all.

Throughout all of this, the logical drive (i.e. C:) continues to work. The system as a whole is now more tolerant of drive failure; a physical drive can actually fail completely and the system can keep on running.

Striping spreads your data across two (or more) physical hard drives. Once again, they are combined transparently by the RAID controller to look like a single drive — perhaps your C: drive.

Hard-disk head movement and the speed of the spinning disk both limit the rate at which data can be retrieved from its media. As one example, by alternating every other sector of your data across two physical drives, the apparent data rate can theoretically be doubled.

RAID 0 should really never be used, even though it sometimes is. It increases the impact of hard drive failure. If either of the two drives fail, then the entire logical drive will have failed. I use it here as an example of a basic RAID technique that can be built upon.

RAID is… improved speed and reliability

The two techniques I’ve discussed can be combined in various ways by adding additional drives.

Let’s think of A and B as our data (we can also think of them as bytes or sectors — it doesn’t matter), and we’ll call Z a sum of A+B.

A, B, and Z are each placed on separate hard drives. These three drives together are managed by the RAID controller to look like a single drive.

When you write data to the drive, A and B each get written to their separate drives; the RAID controller calculates A+B and writes that to the third drive as Z.

If a drive fails (and it could be any of the three drives), whatever was on it can be re-calculated from the remaining two.

The RAID controller can do this so that your system can continue running until the failed drive has been replaced. This gets you the fault tolerance that I discussed as a characteristic of RAID 1.

Your data is spread across two drives: A and B. This allows the RAID controller to stream your data off those two drives; doing this simultaneously gets you the speed improvement of a RAID 0 configuration.

Best of both worlds.

Naturally, I’ve oversimplified. There are many ways to configure RAID arrays, but these are the fundamental concepts that pretty much apply across the board.

You might be tempted to look at RAID 1 and say, “Hey, my data is on two drives. That’s backed up, right?”

Your data is on one drive: C:. Yes, you might be more tolerant of a hard disk failure, and that’s a nice thing, but it’s not a backup.

In general, there are two rules of thumb for backups that you can apply to any backup approach:

Relying on RAID 1 as some kind of backup violates both of these rules.

RAID is an important technology to deliver potentially both speed and fault tolerance. Most higher-end servers, including the server hosting the Ask Leo! site, use some form of RAID for one or both of those purposes.

But don’t confuse it with a backup. Having RAID does not impact your need for proper backups.

Which is better, RAID or backups?

Neither RAID nor backups are “better”, as they are independent solutions for different problems. RAID is used to improve the fault tolerance or speed of disk access. Backups are used to copy drive contents to enable recovery from a variety of issues, ranging from hardware failure to malware to user error. Neither is a replacement for the other.

How useful is RAID in performing backups?

RAID can be useful in performing backups in that it can improve the speed of the backup operation and make the backup operation less likely to be impacted by hardware failures. RAID might typically be used on the drive being backed up for system performance and resiliency, but can also be used on backup servers or backup staging servers to speed up backups.

Which is better, software RAID or hardware RAID?

Hardware RAID involves the use of a dedicated RAID controller, which typically provides better performance than replicating the same functionality in software. RAID implemented in software allows traditional hard disk interfaces to be used without a dedicated hardware control. Which is better depends on your needs and what technologies you have available. 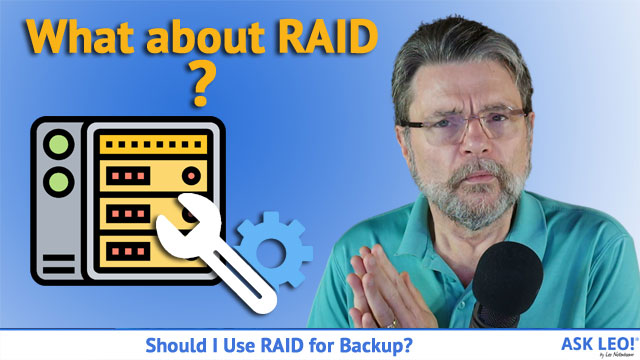 1: Or “independent” disks, depending on who you ask.

3: Don’t laugh — it happens more often than you think. It’s even happened to me.

26 comments on “Should I Use RAID for Backup?”