I have to be honest – this question threw me for quite a loop. But after I’d received it for about the third or fourth time it was clear I had to figure out what was going on.

My initial reaction? Bing’s a web site – “http://bing.com” – it’s not something you “get rid of”. If you don’t like Bing, well then just don’t visit that web site.

It couldn’t be that simple, so I must be missing something.

What I was missing, of course, was that what people were really asking about was the Bing toolbar.

I hate to say it, but terminology matters. A lot.

So to be clear:

Fair enough, except that Microsoft, once again, doesn’t help when they use their own terminology incorrectly.

Getting the Bing Toolbar

One way to get the Bing toolbar is directly from Microsoft:

The confusion begins right away as this one page uses three distinct terms to refer to the Bing toolbar:

The last one is the worst offender. No wonder people are confused.

Since people seem to be surprised by the appearance of the Bing toolbar, I’m going to assume that it shows up in other ways as well. The most common culprit for toolbars in general is as a pre-checked “also install” option when you’re installing something else completely unrelated. In the rush to get whatever that is installed, people just click “Next” until the install starts, not realizing that in doing so they’ve also explicitly asked for the Bing toolbar.

Regardless of how, it’s installed.

Let’s get rid of it.

Here’s the toolbar in Internet Explorer after its default install:

The easiest way to hide it is to click the “X” to its left: 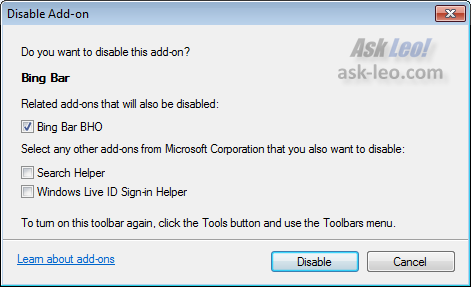 As you can see it’s asking if you’re sure you want to disable the Bing Bar add on. “Bing Bar BHO” is just the Bing Bar add-on (BHO is Browser Helper Object). At the same time you’re given the option of disabling other add-ons that were part of the Bing Bar install.

Gone, but not forgotten.

If you click on the Internet Explorer Tools menu, and then click on Manage Add-ons menu item you’ll see that Bing is still listed as a disabled, but present add-on: 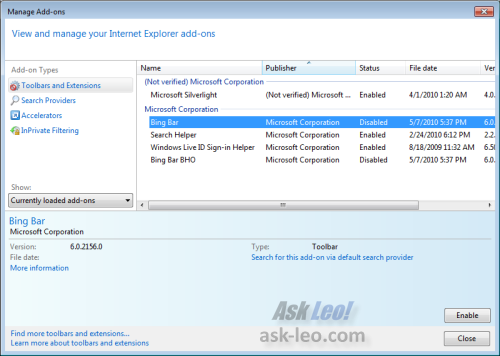 You can re-enable the Bing toolbar here if you wish. (You also could have come here to disable it in the first place.)

In Control Panel, click on Programs, Programs and Features to get to the Uninstall or change a program list:

And there it sits. Even though we’ve disabled it, it remains installed. 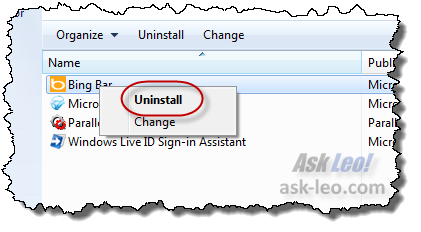 After a few confirmations: 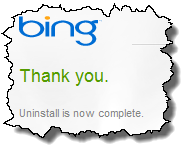 Final Thoughts about Bing and its Toolbar

As I’ve written about before, the practice of “drive by installs” of toolbars and other software is both annoying and sadly common. In my opinion, it’s really just another form of advertising in most cases. Whenever you install software, any software, you need to pay very close attention to all the options that are offered, and make sure that you are installing only what you want.

In actually downloading and installing the Bing toolbar for this answer, I was quite amazed at how much was downloaded. This is not a lightweight install, and for that reason if no other I would strongly recommend against it. It’s just not worth it, in my opinion.

However, that’s just my opinion. It’s also a safe toolbar – as long as you get it from Microsoft or other reputable source it’s not going to come with malware or the like.

Just make sure that it’s something you do want.

And if you get it somehow, and you decide you don’t want it, just uninstall it using the steps above.

Update: Getting Rid of the Bing Search Provider

I’ve added a new article on getting rid of one trace of Bing that the above article doesn’t address: the search provider. That’s the tool that powers the search box typically in the upper right of your browser window. See How do I
really get rid of all of Bing? for more.