The message has been both confusing and clear.

Exactly how long Windows 10 will be supported has changed since its original release. The original expectations were unrealistic at best.
Applies to Windows: 10
I wish you’d addressed the issue of Win 10 support. We certainly were given the impression it was permanent when we bought.

That question was in response to my article, Did Microsoft Lie?, about Windows 10 supposedly being the “last version” of Windows.

Around that time, some statements about its support were also made, which in hindsight may also have been misleading.

Misleading or not, reality appears to be something other than we thought.

Windows 10 will be supported until October 14, 2025, with each feature release along the way being supported for 18 months. The original implications that various Windows 10 releases might be supported forever were unrealistic from the start.

I’ve covered the state of Windows support for all current versions in a prior article. According to Microsoft, the formal end-of-support date for Windows 10 Home and Pro is October 14, 2025.

As always, the operating system will continue to function, but bug fixes and security updates will no longer be available after that date.

This represents a change from the original positioning of Microsoft that many remember.

We now know that’s not true. Honestly, it never could have been true. I just can’t envision the Windows 10 start screen on whatever hardware looks like in 100 years — or on any of today’s hardware still running then, either.

The slightly less absurd message that started making the rounds was that Windows 10 would be supported forever on currently supported hardware.

That implied there may be new hardware running on starships in 100 years for which Windows 10 would not be supported, but that the hardware that runs it today would still be supported 100 years from now. (If that hardware’s still running, of course.)

Once again, taken to that extreme, that didn’t make sense either.

Then some more pragmatic rules began to appear.

Each feature release for 18 months

Windows 10 releases “major” feature releases twice a year. Microsoft says that each of these releases will be supported for 18 months.

The implication: as long as you kept taking the feature releases, and with no end to those releases in sight, your Windows 10 machine would continue to be supported forever.

And then the hammer dropped.

Each feature release for 18 months on supported hardware

A subtle change to the 18-month rule opened the possibility that support for Windows on your old hardware might end someday.

OK, it was less of a possibility and more of a certainty.

The “supported hardware” clause opened the door to a future feature release having hardware requirements that current machines would not support. This meant that at some point, your machine would no longer be supported by Windows 10 after the last feature release supporting your hardware reached its own end-of-life date.

There was no predicting when that might be, though. It was all subject to the specific changes made in a twice-yearly feature release made sometime in the future.

Finally, the end was defined.

Prior to announcing Windows 11, Microsoft finally put a stake in the ground for Windows 10. In short:

Given that Windows 11 has a confusing set of additional hardware requirements, I suspect that the “on supported hardware” clause will have little effect for the remainder of Windows 10. If your machine runs it today, there’s a good chance it’ll keep running Windows 10 until the end.

The Windows 10 future mapped out

Microsoft has only officially announced dates for Windows 10 final feature update, and the most recent.

If we assume continued half-yearly releases, the future of Windows 10 looks like this:

As you can see, we have many releases left to go before Windows 10 bids farewell.

So, did they mislead?

My position is along the lines of Hanlon’s Razor. I think at worst, Microsoft screwed up their messaging, nothing more. It’s not the first time.1 At best, they finally came to their senses and realized that what they’d allowed to be stated or implied just wasn’t practical.

No one in their right mind would think that any operating system could be supported forever. Forget my 100-year timeframe above; it’s well known that hardware frequently outlasts the length of time it’s practical for companies to support it. That’s just as true for Windows 10 as it was for Windows XP, or Windows 95 before it.

Stating (or even implying) “forever” in any support scenario was a gross mistake.

What happens when Windows 10 support ends? 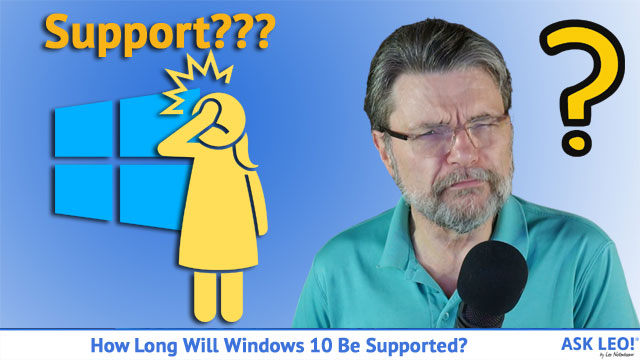 29 comments on “How Long Will Windows 10 Be Supported?”