The goal of many social media companies is to keep you engaged as long as possible. You can avoid social media algorithms and take back (some) control.

A lot has been written in recent years about social media — specifically, the algorithms social media companies use when choosing what to show you.

To say it’s controversial is an understatement. It’s been blamed for everything from increasingly short attention spans to the looming downfall of democracy.

Let’s review just what those algorithms mean, how they work, why they work, and some ways you can avoid them — or at least take back more control.

The algorithms used by social media sites to determine what to show you are designed to maximize your use of their service and keep you engaged as long as possible. Rather than showing you what you explicitly ask for, they show you what they believe will increase your engagement. You can take back control by choosing alternate sources for important information, focusing on the “social” aspect of social media, and, in some cases, using available controls to side-step the algorithms.

An algorithm is nothing more than a set of instructions to be followed.

The classic example of an algorithm you’re already familiar with is a recipe: ingredients and steps to produce the desired result, such as a cake.

In essence, computer algorithms do the same thing:

Step-by-step instructions to achieve the desired result, which is to show you any new email.

Naturally, this is simplified. The actual algorithms implemented by your email program, or just about any software on your computer or online, are more detailed and complex by several orders of magnitude.

One thing that is at least similar across social media services seems to be the desired result: they all want you to spend more time using their service. The longer you stay engaged, the more money they make by showing more ads and more sponsored content.

That’s where the algorithms come into play.

What we expect is to be shown the most recent posts or tweets or videos from the various pages and people we’ve elected to follow. That is a very simple algorithm: select everything I’ve expressed an interest in, sort it by the date posted, and show me the most recent.

It’s generally not the algorithm they use.

Giving us what we expect is nice and all that, but apparently the social media services believe it’s not enough to hold our attention. We’ll use their platforms more and longer if the systems use our actions to predict what truly engages us.

That’s a much more complex algorithm, although it’s conceptually simple (if vague): “show more posts (tweets/videos) similar to the posts you seem to like”.

Keeping you engaged doesn’t mean keeping you happy. If you’re spending more time with a post because it upsets you, then social media services may well find and show you more posts that upset you.

And, of course, social media algorithms are constantly being tweaked and tested, all with the goal of getting you to hang around longer.

Can we avoid it? Maybe. Sometimes.

Some social media services make it possible, although not obvious, to exercise a little more control.

The default feed uses their algorithm, but “Most Recent” supposedly lives up to its name.

“Most Recent” lives in the left-hand column, on desktop, though you may need to click a “See more” to expose it. On mobile apps it appears as “Recent & Favorites” if you tap on your own icon. Once again, you may need to “see more”.

Unfortunately, it’s easy to “reset” to the default feed as you navigate within Facebook. On desktop, at least, consider bookmarking the page you land on after clicking on “Most Recent” and using that as your Facebook home link.

YouTube — also, at its heart, a social media platform that leverages an engagement algorithm heavily — has a “subscriptions” link:

Instead, I get important information from other sources.

I still use social media. I still think it’s valuable, particularly the “social” aspect. But when it comes to “media”, I much prefer techniques like these that leave me in control and sidestep social media’s attention-retaining algorithms. 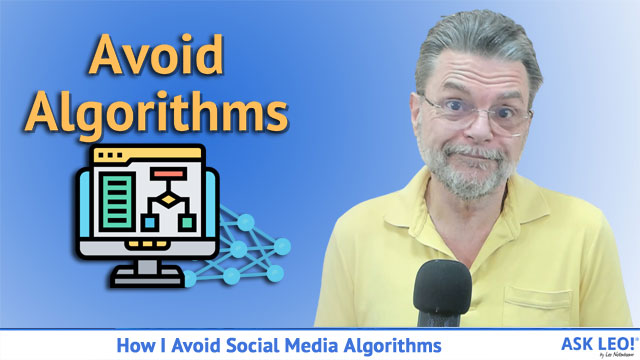 1: Almost certainly for different countries, based on each country’s laws and level of interference.

2: RSS turns out to be a key underpinning of podcasting. It’s the format in which podcasts are delivered.

13 comments on “How I Avoid Social Media Algorithms”