RSS is a powerful information-publishing and -collection mechanism that bypasses email and makes it easy to stay up-to-date with a large number of websites and other RSS-enabled services.

Depending on who you ask, RSS stands for either Rich Site Summary or Really Simple Syndication. It’s spawned a handful of buzzwords like feed or RSS feed, as well as multiple different file formats, including something called atom.

Great. But just what is RSS?

It’s a little like email, but without all the spam.

RSS is a file format and a mechanism for websites to publish content that can be read by other online tools. One of those tools, a feed reader, can be an excellent way to collect updated information and newly published articles from numerous websites in a single location.

It starts with a feed

A feed is nothing more than a specially formatted file that gets updated whenever something is added to a website.

That’s all RSS really is.

Let’s look at one.

You can click if you like, but depending on several things, the results are unpredictable. Benign, but unpredictable. Here’s a snippet of what I see using Google Chrome:

It’s clearly not meant to be read by humans. It’s an XML-formatted document that lists the first part of the most recent articles on Ask Leo!, updated each time a new article is published.

XML (eXtensible Markup Language) isn’t directly readable by ordinary web browsers or email programs. So how do you use an RSS feed?

Subscribing to an RSS feed

In most cases, you subscribe to an RSS feed using a special RSS reading program or service called an aggregator or feed reader.

When you run the feed reader, it goes out, grabs a copy of the RSS file, and shows you what’s changed since you last looked.

That’s it. It’s that simple.

The power is that you can subscribe to many different feeds from many different sources, and when any of them update, all the updates show up in one place: your feed reader.

I happen to use (and recommend) Feedly, so I’ll use that as my example.

That’s an image of my personal Feedly setup. (Note: they have an AI feature named “LEO” — that’s not some kind of personalization specific to me.)

On the left, you’ll see a list of feeds that I’ve subscribed to. Those are organized into a few categories. On the right are specific articles pulled from those feeds. The example above shows all articles from all feeds, but I can choose to view only those in a given category, or a specific feed, just by clicking on it in the list.

Each time a new article is published in any of the various sources I’ve added, it automatically appears here.

When you subscribe to a site’s RSS feed, you typically find either:

Full content: Each article published on the website is included in its entirety in the RSS feed. That means you can read the entire article in your feed reader without needing to click through to the site.

Partial content: Each item includes only the first part of each article, and you need to click through to the site to read the whole thing.

There are folks who feel strongly that one way or the other is the Only Acceptable Approach.

The problem with RSS, from a publisher’s point of view, is it provides the content in a format easily consumable by software in the form of feed readers. But unfortunately, entire sites, or at least a majority of their content, are often completely duplicated without permission by automated software reading the RSS feed. Theft is rampant.

That’s why Ask Leo! publishes only partial content – so as not to make the theft of the content any easier than it need be.

Why RSS is useful

So websites provide feeds, which you can then view in a feed reader.

Why would you want to?

How do I know if a site offers RSS?

That can occasionally get confusing.

First, look for the RSS icon: – that’s usually a link to the RSS feed for the site you’re visiting.

Try just subscribing to the site’s URL. It may provide those hints I mentioned earlier that will allow your feed reader to figure it out.

Try subscribing to the site’s URL plus the word “feed”, the standard approach for many WordPress-based sites (including Ask Leo!).

In some cases, site owners may not even realize they have an RSS feed, because it is often generated automatically by many popular content-management and blogging platforms.

And of course, if a site has multiple RSS feeds, search the site for information. You may find that the site has a page laying out its various RSS feeds and their purposes.

It may not be for everyone, but I do recommend you look into RSS as a possible alternative to some of your email subscriptions and more. Once you get comfortable with RSS, you can look into the additional and powerful ways that it’s used beyond a site’s most recent updates.

1: There are situations where RSS feeds are private or subscriber-only, and in these situations, you’d need to supply login or access credentials that would identify you. This is fairly rare, however. 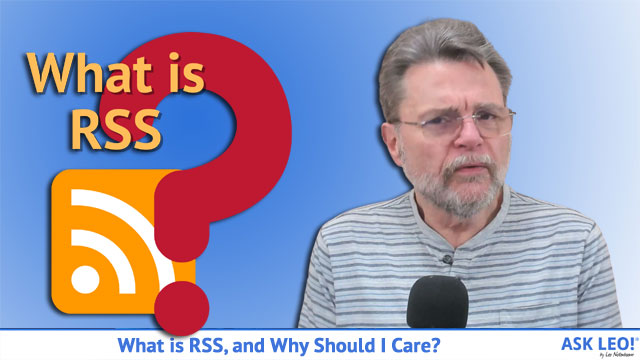 6 comments on “What is RSS, and Why Should I Care?”