I was thinking about purchasing Microsoft Word, which I had on my last computer. I need it occasionally to make lists, etc. I think it costs around $100 or perhaps even less. I don’t need Office, etc., just Word. I happened to read this article on freebies and it mentioned something called Open Office. So, I need your suggestion. Is this something I should download or am I better off purchasing Word? I assume that Open Office works the same as Word. In fact, perhaps you know of other free alternatives?

There are now many free Microsoft Office alternatives, and they’re all pretty darned good.

One of them? Microsoft Office itself.

There are others as well. A crowdsourced list is available at alternativeto.net.

I’ve written about Office Online before. It’s the online, web-based version of many of the Microsoft Office programs. It includes Word, Excel, PowerPoint, and more. Office Online is free to use, and since these versions are web-based, they can be used from any version of Windows, and any computer running any operating system with a compatible web browser.

Visit office.com in your browser to get started. All you need is your Microsoft account, and you’re good to go. Integration with Windows 10 and OneDrive is nearly seamless, and it’s perhaps the most compatible of all the alternatives.

Google Docs is the other major online alternative. With Google services being nearly ubiquitous, once again you may already have access with your Google (Gmail) account.

Technically “Docs” refers only to the word-processor alternative to Microsoft Word, though it’s often used as a synonym for the entire suite. Google Sheets is the spreadsheet Excel alternative, Google Slides is the PowerPoint alternative, and Google Forms adds online form creation and filling abilities.

All are free, though you can pay for additional Drive storage should you need it.

Visit docs.google.com in your browser to get started. Sign in with your Google account and you’re good to go. Integration into Gmail and other Google services is nearly seamless, and it’s perhaps the most popular of the online alternatives.

Libre Office is a completely free suite of office programs you download to your computer.

Libre Office is available for Windows, Mac, and Linux. All version of Libre Office are identical no matter what platform you use.

And it’s completely free. No one-time charges, no subscriptions; just download, install, and use.

Apache Open Office is a completely free suite of office programs you download to your computer.

Open Office is available for Windows, Mac, and Linux. All version of Open Office are identical no matter what platform you use.

And it’s completely free. No one-time charges, no subscriptions; just download, install, and use.

If the descriptions for Libre Office and Open Office look similar, it’s because they are. Libre Office is what’s called a “fork” of Open Office. It was created several years ago, mostly due to organizational politics, as I understand it.

Both are good, though their feature sets have diverged slightly over time. Libre Office tends to release updates more quickly, and comes pre-installed in many Linux distributions.

For a more detailed look at the differences, see this relatively recent article out on Digital Trends.

If you’re not sure, you probably can’t go wrong with either, but I’d give Libre Office a slight edge.

Most alternatives don’t have all the advanced features Microsoft Office offers. Exactly what those missing features might be will vary over time, as they continue to change and grow. If you don’t use those advanced features, this probably doesn’t matter to you at all.

The programs are compatible with each other in that they can both read and write the same file formats, but in practice, they are not identical and do not produce identical results. When using the other alternatives, formatting differences are common when exchanging documents. If that matters to you, a non-Microsoft solution may not be the best choice.

Are these suitable alternatives for you? It really depends on your needs.

If your needs are basic to moderate in complexity, and strict visual compatibility with Microsoft Office isn’t a concern for you, then any of these are good, free alternatives. I’d start down the list in the order presented: Microsoft Office, Google Docs for online-only experiences, and Libre Office and Open Office if you need something installed on your PC for offline use.

The alternatives I’ve presented here are the most common, the most recognizable, and the most popular.

But they’re certainly not the only ones.

A good resource for additional alternatives is “alternativeto.net” — a crowd-sourced list of alternatives to many popular programs, both free and paid. 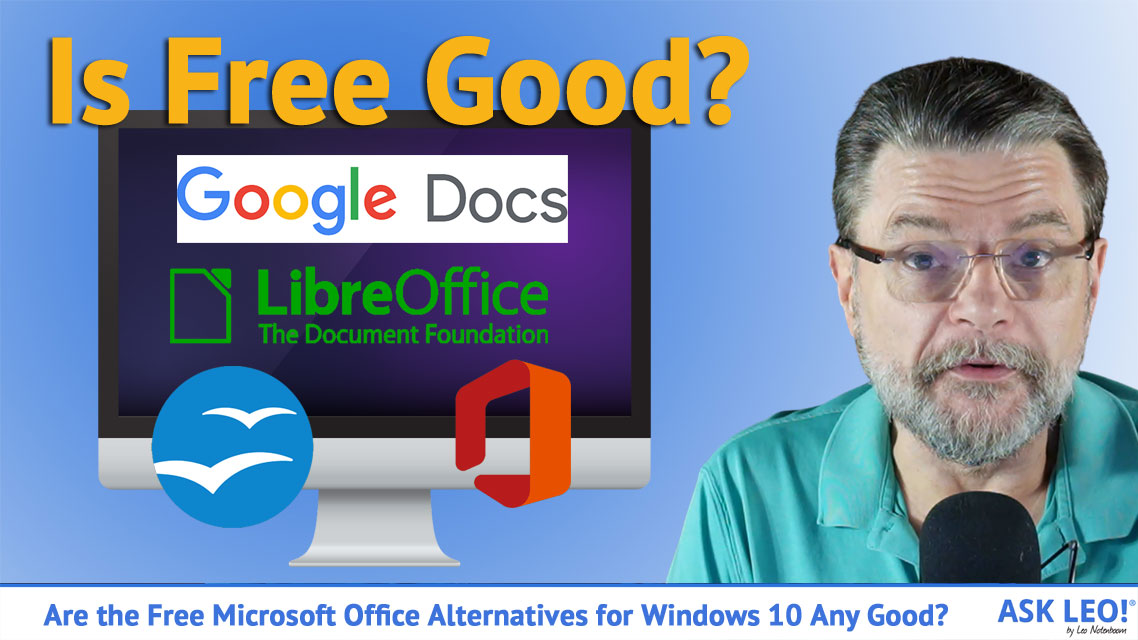 1: The reverse is often also true: current versions of Microsoft Office can read and write other native file formats, including those from Open and Libre Office.

60 comments on “Are the Free Microsoft Office Alternatives for Windows 10 Any Good?”