Why you might not care about it as much as in the past.

CPU speed doesn't matter quite as much as it once did. I'll discuss why, and what you should also be looking at.
l’ve long believed that the clock rate of a desktop motherboard was the main essence of speed/power. The system clock (crystal chip) used to be on the motherboard. Now that I’m looking for a replacement motherboard, I want one that has at least the same speed/clock rate as the old one, but I am being told by salesmen that these days, the clock is part of the processor, and to get a faster one, find the relevant processor.

The clock is typically on the motherboard. But regardless of where the clock resides, you need a processor capable of running at that speed.

But there are several reasons that may not be as important as it once was.

CPU speed is important, but it’s not as good a measure of overall system speed as it might have been in years past. Factoring in to today’s machines are technologies like multi-core CPUs, solid state disk drives, and more. Understanding how these relate and when they become important can result in a machine more properly configured for your use.

CPU and motherboard discussions bring out passionate opinions in some. There are strong (STRONG) feelings that this or that is most important, that this architecture is better than that architecture, and so on.

If that’s you, this article isn’t for you. My intent here is to cover things at a higher, much more abstract layer — a layer that’s more practical for the less passionate “average consumer” who doesn’t want or need to understand all the different processor families, characteristics, and the like. They’re not trying to eek out every possible cycle of processor speed; they just want something that works well and works reliably.

They just want to know what to pay attention to.

Before we dive in, it’s probably worth defining a couple of things.

Clock – the clock speed of a CPU is at its most basic a measure of how many instructions it can perform per second period so a simple CPU running at 300 MHz, for example, can perform around 300 million operations per second.

I have to say “simple” CPU, because of course current CPUs are anything but simple. Some operations actually take more than one clock cycle, while others can be done in parallel, meaning that together they take less than one clock cycle each when combined. But the CPU clock speed has always been a rule of thumb that we’ve used for decades to measure at least at a conceptual level how fast our processors are running.

In the past, the design outlined in your question wasn’t all that wrong. The clock rate of the processor (or Central Processing Unit) in the computer was a relatively good indicator of its overall speed.

I recall the days when replacing a 333MHz machine with a 666MHz was an incredible difference worth getting excited over.

One of the reasons we could so easily rely on that one measurement is that it represented more than just raw CPU computing power. That same clock often drove many other components on the motherboard besides the CPU. It was truly the “system” clock, and was a rough indicator of system speed.

Is your CPU is overly busy? Find out why: How do I find out what program is using all my CPU?

Clock rate seems to have levelled off for some time. For example, most of what I see is in the 3.2Ghz range, but it’s really all over the map. The desktop computer I’m running has a 3.5Ghz processor, while the server that’s running the Ask Leo! website is running at 2.5Ghz.

First, all that number reflects is the CPU speed. It may not relate to as many other things on the motherboard as before. It’s not uncommon for other devices to have their own decoupled clock, which allows them to run at speeds more appropriate for whatever they’re doing.

CPU speed remains important, but not as important. If you’re performing lots of CPU-intensive tasks, for example, then a fast CPU can make a lot of difference. It’s one of the reasons my desktop machine is at the higher end of the range. I selected it with video editing in mind, which is a very CPU-intensive task. Games are another situation where the speed of the CPU itself can matter quite a bit.

But if you don’t regularly run CPU-intensive tasks, other things may come into play.

In my mind, two things have taken the place of pure CPU speed.

First, CPUs are now multi-core. A core is essentially an independent computing unit. A dual-core machine is like having two CPUs, except they’re in a single package, so we refer to it as a single CPU with two cores.

My desktop machine has a CPU with 16 cores. The Ask Leo! server’s CPU has 8. Higher-end servers can have hundreds.

The reason cores matter so much is that we’re rarely asking the computer to do only one thing. Multiple cores allow the computer to literally do several things at once. The Ask Leo! server, for example, can actively respond to 8 different requests at exactly the same time.1

Software can also be written to take advantage of multiple cores. For example, my video editing software can take advantage of all the cores on my machine. So not only are they fast cores (3.5GHz) but there are 16 of them. (It might be tempting to say that’s the equivalent of 16 times 3.5GHz or a 56GHz processor, but the reality isn’t quite that simple. It is fast, though.)

The single biggest improvement to computing speed over the last several years has not been an ever increasing CPU speed, but an increasing number of cores placed in the CPU.

Generally more important than the CPU

The other major improvement to the speed of our computers has nothing to do with the CPU.

The fact that the disk can make such a dramatic improvement in our perception of speed just confirms the fact that the CPU might not matter as much as we might think. Depending on what we’re doing, we might access the disk much more than we realize, and as a result, a faster disk will have the most dramatic impact.

As with so many of my answers, there’s no single definitive solution.

Most often than not, it depends on how you use your computer.

If you do computer tech support for a living, like to edit videos, run multiple virtual machines, keep four different browsers open at once (as well as a plethora of other applications), and you plan to keep your machine for a decade or more, then maximizing everything — CPU speed and cores, RAM, and SSDs — probably makes the most sense.

If, on the other hand, you’re more normal than I am and spend most of your day surfing the internet and using chat and email, then most current CPUs with multiple cores (it’s difficult to find less than four these days) will do you just fine. I also recommend an SSD, but that too is pretty standard now as well.

And if your needs are somewhere in between, you’ll want to trade all of those off against each other and your budget.

I don’t obsess about CPU speed anymore, and neither should you, unless you know you have a specific need.

Instead, understand and consider the various combinations of technologies in today’s computers and how they might combine to solve the problem you’re looking to solve.

Hopefully, you’ve now got a high-level idea of the kinds of things that might matter.

Looking for more guidance? Subscribe to Confident Computing! Less frustration and more confidence, solutions, answers, and tips in your inbox every week. 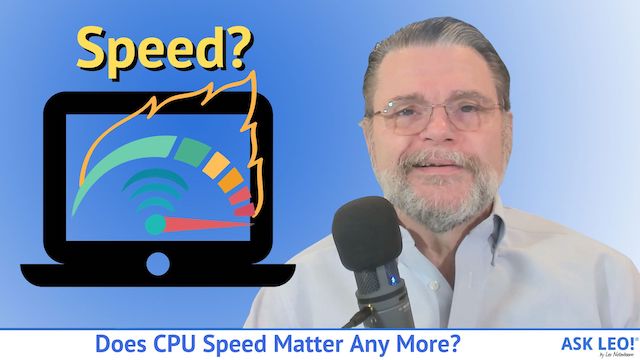 1: It’s actually much more than this because CPU resources aren’t the only thing involved. I did say this was an over-simplification, though.

15 comments on “Does CPU Speed Matter Any More?”