Backing up an encrypted hard drive shouldn't be difficult, but it's important to understand what you'll get.

I encrypt my hard disk with BitLocker. My backup program tells me it can only perform a “sector by sector” backup, whatever that is. So, when I back up, is the backup encrypted or not? If not, how should I back up securely?

As with so many things, it depends.

And even then, what actually happens may not reflect what probably should happen.

Backing up an encrypted disk

There are two ways to back up an encrypted hard disk. The most common and recommended approach is to back up the files on the disk in their unencrypted form, and then secure the backup some other way. The alternative is a sector-by-sector backup of the drive in its encrypted form, which would require both a complete restore and a separate encryption key in order to recover its contents. Above all: back up.

There are many approaches to encrypting files. Whole-disk encryption bypasses it all by ignoring files completely and encrypting everything at the next level down, when the data is written to disk.

Whole-disk encryption encrypts more than files; it encrypts information about the files, including the information allowing the operating system to locate the files on the disk.

This leads to an interesting dilemma when it comes to backing up.

Backing up an encrypted disk

There are two ways to “see” an encrypted hard disk:

That leads to two ways to back it up.

If your system drive is encrypted, there are two scenarios for backing up.

Curious how disks get encrypted in the first place? How Do I Encrypt a Disk? will tell you.

For reasons unknown, not all backup programs work as I’ve described.

Some fail to backup an encrypted drive or partition even though the partition is mounted and accessible.

Some backup programs state you must decrypt the drive (remove BitLocker, for example) to back it up, after which you can re-encrypt it. Not only does that take significantly more time, but it also can’t be automated and, quite honestly, doesn’t make much sense to me.

I think it’s important that you be able to back up from within Windows.

Is the backup encrypted?

If it’s important to you that such a backup be encrypted, you need to take additional steps. That means either of two things:

Whole-disk encryption is a fine thing,1 and I use BitLocker on my Windows laptop and Apple’s equivalent on my Macs.

But above all, do back up.

Can you back up encrypted files?

Can you back up a BitLocker drive?

Yes, you can back up a BitLocker drive. It’s most easily done using traditional backup software to back up the unencrypted contents of the drive, and then securing that back up some other way — perhaps through the backup program itself, separately encrypting the backup, or storing the backup securely. You can also back up a BitLocker drive at the encrypted sector level, but this will require you to save the encryption keys separately to restore and decrypt the drive or its contents.

What does it mean to encrypt a backup disk?

There are two approaches to encrypting a backup disk. You can use whole-drive encryption, meaning the drive’s contents will be accessible in unencrypted form whenever the drive is mounted. You can also encrypt the backup files themselves individually, using tools like VeraCrypt, Zip, or others. Finally, many backup programs include the ability to password-protect a backup disk, which encrypts the backup contents.

Should backups be encrypted?

Backups should be encrypted when they contain sensitive information and are stored in a less than totally secure way. The most common approach for the average user is to use a password in their backup program. This will create backups that require that password should they ever need to be used. It’s also common to make sure that unencrypted backups are stored in some kind of secure way, such as offline or in an inaccessible location.

How do I copy files from a Bitlocker-encrypted drive?

To copy files from a drive encrypted using Bitlocker, first mount the drive in Windows. If it’s your system drive, that will have happened when you signed in to Windows. If it’s another drive that Windows already knows about, that too will be automatically mounted. If it’s a drive encrypted elsewhere, when you attach it to Windows you’ll either be asked to provide the backup encryption key, or you may need to right-click on the drive in Windows File Explorer or Disk Manager to do so. The only way to recover files from a BitLocker-encrypted drive is to provide the encryption key. 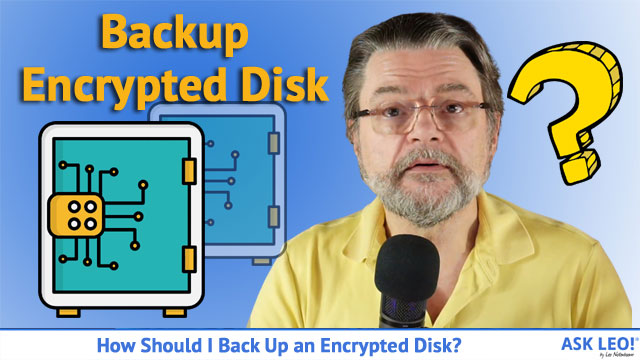 1: Yes, this does represent a change in my position from days long past. The caveat to using whole-disk encryption and BitLocker safely is to a) back up, as we’re discussing here, and b) safely and securely save the encryption key created when the disk is originally encrypted.

25 comments on “How Should I Back Up an Encrypted Disk?”