Most music, picture, and movie files are already compressed. Compressing them again won't make much difference, and could even make them larger.

Can I ZIP my photos or MP3 files to save disk space?

You can zip them, but you won’t save much space, if any. The result could even take up more space than the original!

ZIP is a very popular compression algorithm supported by many popular programs, such as WinZip, 7-Zip, and even Windows itself. “Zipping” (or compressing) a file or set of files can often reduce their size significantly, but at the cost of needing to be unzipped before they can be used.

Note though that I said, “…often reduce their size.”

All compression algorithms can create situations where the result could be bigger than the original. Compressing already-compressed files is one common scenario. Since photos, mp3, and other popular file formats are already compressed, compressing them again rarely has much effect, and can even make them larger.

Zipping photographs, music, and videos will typically not make them significantly smaller and can even make them slightly larger.

To understand why that might be, we need to look into how compression works at a high level.

While the specifics of many different compression algorithms are often the stuff of research, theses, and even patents, the concepts of compression are fairly simple.

The idea is that information stored on disk is often stored in a way that is less than optimal for storage. It may be optimal for other purposes, but as a side effect, there may be redundant information in the data that could be represented differently.

We’ve shortened or “compressed” the text to only 53 characters, but it still means exactly the same thing. When decompressed, the “+” is encountered causing the “10*” that follows it to be read and replaced with 10 asterisks. The original uncompressed text is restored.

In the example above, we took a line of 59 characters and “compressed” it to 53 characters. It’s not a great compression algorithm, but it worked.

The problem is that because it actually contains the plus sign, the character we said was special in our compression algorithm, we can’t just let it be. If we do, the decompression algorithm will look at it and say, “Oh, the next two characters are a count of the number of times I should repeat the third character following,” which is simply wrong.

Unless we specially encode the plus character, the decompressed line will read:

That allowed the decompressor to follow its algorithm: “+” means the next three characters are a count (one, in this case) of the number of times to repeat the third character (“+”). The compression and decompression algorithm works.

The only problem is that the “compressed” data, at 49 characters, is now larger than the original 46.

Every compression algorithm faces this problem. My little example above was crafted to make it easy to show, but even the most advanced compression algorithms encounter situations where compressing particular forms of data may cause the “compressed” data to be larger than the original.

Let’s look at the compressed version of my silly little example again:

What happens if we try to compress that data again? Well, as we saw, that single “+” sign is a problem and needs to be treated specially:

The result is that the “compressed” data got bigger than the original.

Or rather, compressing the already-compressed data made it larger.

This happens most reliably when you compress twice using the same algorithm, but if the compression techniques you’re using are relatively efficient, then the algorithms don’t matter as much. Zipping something twice makes the second zip larger than the first. Zipping a “RAR” file, also a compressed file just using a different algorithm, will also typically result in something bigger than the original.

With that as background, we can finally explain our answer to the question.

Pictures in popular formats such as .jpg, .png or .gif are already compressed.

Music files in formats like .mp3, .ogg, .aac, and so on are already compressed.

Video files in formats like .wmv, .m4v, .mov, and more are already compressed.

Even some document formats like .docx, .xlsx, .pptx, and so on are already compressed.1

And as we’ve seen by now, depending on the type of compression you’re using, compressing an already-compressed file at best does very little, and at worst makes the file bigger.

So there’s typically no space-saving advantage to zipping a photo, a movie, or an MP3.

Zipping is more than compression

Of course, creating a .zip file is useful for more than just compression.

It can be handy to ZIP several files (for example, a collection of several pictures) together, combining them into a single file for a single download, attachment, or file transfer. Zipping a collection of files together can also make the result smaller as file-system overhead is reduced from multiple files to a single file.

People still need to unzip before they can see them, but it can be simpler to transfer only one ZIP file rather than several separate unzipped files.

What is a zipped photo?

A zipped photo is a photo in any file format, such as .jpg, .png, .gif, or others, that has been further compressed using a ZIP compression utility. Typically this means that the .zip file containing the photo must first be unpacked using a ZIP utility in order to be able to access the photo(s) within.

How do I email a zip file of photos?

A zipped collection of photos can be a convenient way to transfer the collection to someone via email. The photos are zipped into a single file using a ZIP compression utility, and the resulting “.zip” file can then be included as an attachment to an email message.

ZIP and other compression utilities are designed such that a file compressed and then decompressed is bit-for-bit identical with the original. This means that there cannot be any loss in quality due to the process of zipping or otherwise compressing a file. Contrast this with the “.jpg” file format, which by definition is allowed to compromise image quality for space-saving depending on settings when the .jpg file is created. 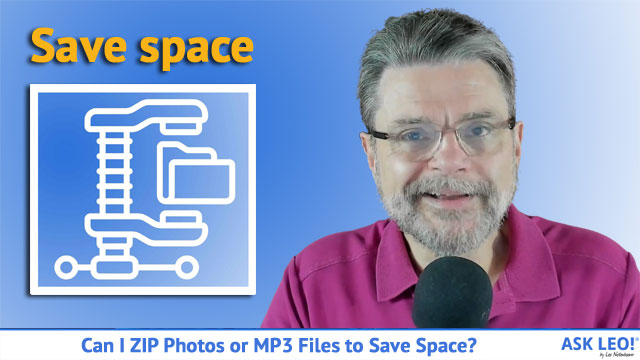 1: Ironically, using the ZIP compression algorithm. Rename any “.docx”-style file to be “.zip” instead and you can view and even decompress its contents with a ZIP utility.

40 comments on “Can I ZIP Photos or MP3 Files to Save Space?”