Age isn’t the limiting factor; it’s all about attitude.

I keep hearing from people who consider themselves too old. They're not. Don't be like them.

It’s something I hear too frequently.

When it comes to computers and technology, I have only one word for you: bullsh*t.

Too old for technology? No.

Negative self-talk may convince you you’re too old to “get” or learn about technology. Nothing could be further from the truth, regardless of your age. If you have limitations, they are generally not age specific, and can be compensated for. Success with technology, or any endeavor, is significantly more about attitude than it is age; just ask the 95-year-old computer instructor or the 100-year-old blogger. Being willing to learn, and knowing that you can, will help you stay mentally fit and young.

The remarks I see

Questions I receive often include self-deprecating remarks like “I know I’m tool old to for this” or “Put it in extra simple small-word terms because I’m too old.”

My reaction — which you mostly don’t see or hear, of course — is a frustrated sigh, a shake of my head, and sometimes an actual cry of “bullsh*t!”

What I also see

Some years ago, I stopped by the local senior center to check in on their computer-related offerings. After we chatted for a while, the gentleman in charge of teaching several classes on Android phones and related devices asked me how old I thought he was. I’m pretty bad at that, but I threw out a guess of early 70s.

95, and not just using but teaching technology.

I know of octogenarians and nonagenarians who are having the time of their lives with technology. One of my favorite bloggers recently crossed into centenarian territory.

They still have questions — everyone does — but they’re using their tech to stay active, connected, and interested in the world around them. They’re using technology to stay young.

They do not let age get in the way.

It doesn’t matter how old you are. I see “younger” folks (whatever definition of “younger” you like) who struggle with technology as well.

What matters much more is your approach, your attitude, and your willingness to learn and grow.

That’s true at any age, but particularly as we age, it’s part of staying mentally fit. It’s not the problem; it’s part of the solution.

Negative age-related self-talk is reinforced by rampant ageism in much of western society.

The perception is that younger people are more capable.

I say again: bullsh*t. Don’t buy into the lie.

Many people confuse limitations with age.

Be it poor eyesight, poor fine-motor skills, or even a perception of being unable to accomplish things as quickly as others, these limitations and others, while perhaps more common as we age, are not limited to the aged. Pick any difficulty you think you experience, and I can assure you, there are people much, much younger who face the same or worse.

There are more people of all age groups facing limitations than you might think.

Limitations can be overcome or accommodated.

It’s often not about you at all

Technical gobbledygook, as I like to call it, is a huge issue. Some of the biggest barriers to technology are the terminology, the concepts involved, and how they’re presented. If you don’t understand something, it’s not your age; it’s the writer’s inability to communicate in an understandable way.1

People of all ages have trouble with technical gobbledygook.

This is not a new pet peeve of mine, and I’ve talked about it before. A common reaction is, “You just wait until you’re older, buddy!”

As I update this, I’m just past my 65th birthday. Many people who tell me they’re “too old” are younger than I am.

Short of severe physical or mental disability, I expect to be doing what I’m doing, or something similar, until the day I die. I hope that’s many, many years from now. I’m having too much fun.

Sure, I might encounter new limitations along the way, but that can already happen at any stage in life. I’ll cope as best I can.

It’s probably obvious by now, but this is something I’m passionate about.

Whatever your age, stop using it as an excuse.

There’s an entire world of possibilities you’re selling yourself short on. You’re stepping away from it every time you make that assumption and every time you have that internal dialogue with yourself.

Foster an attitude of learning. Do it at your own pace, but know that you can.

You’re not too old for this, and I really, really (in case it’s not clear), really want you to stop thinking that.

One thing that’ll help: subscribe to my weekly newsletter, Confident Computing! Less frustration and more confidence, solutions, answers, and tips in your inbox every week. 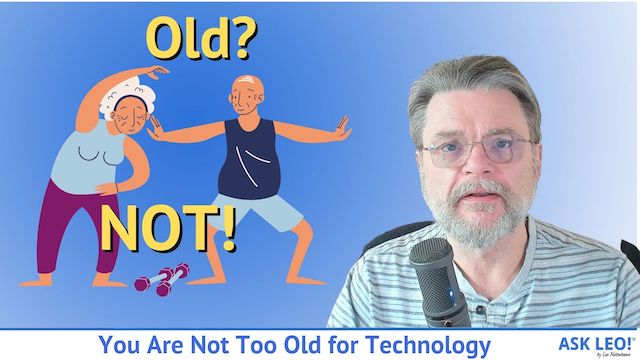 1: To be fair, it’s not easy, but it’s also not given nearly enough attention by the technology companies involved.

50 comments on “You Are Not Too Old for Technology”