When jumping to conclusions leads you astray.

There's a common situation that leads people to think their Facebook account has been hacked. They're wrong.

Don’t accept any friend requests from me, my account has been hacked!

We’ve all seen that one on Facebook. Someone got reports of friend requests they didn’t send, so they post a message to all their friends that they’ve been hacked.

Except it’s not. It’s exactly and completely wrong.

You can’t friend request your existing friends. Any friend requests they see are from other, very likely fake, impersonation accounts. The right thing to do is to report the fake accounts to Facebook. Hackers seem to use this technique to eventually impersonate you and attempt to scam your friends.

You can’t friend your friends

If the only symptom is that some of your (already) friends on Facebook are asking you why you sent them a friend request, it’s extremely unlikely that your account has been hacked.

Change your password if you like, but telling all your friends “I’ve been hacked” is … well, actually it’s kind of embarrassing. You haven’t been.

This is something else.

But what if you’re certain you really have been hacked? That’s here: Facebook Hacked? What You Need to Do NOW!

What’s significantly more likely to have happened is this:

Other than the person viewing your photos and friends, your account was never involved.

So, what do you do about it?

You, or your friends receiving these friend requests, should go to the account in question and report it to Facebook.

Make sure that your friends report the impersonator, not you.

Or you can tell your friends to simply ignore the friend requests because you’re already friends. Those requests are coming from a fake account.

Why do some people try to create these fake accounts and connect with your friends?

My theory is that it’s to prepare for scams and abuse to come.

Perhaps sometime in the future, after you’ve all forgotten about this, they’ll reach out to their “friends” (your friends they fooled into connecting with them), pretending to be you, and ask them for something. Usually, it’s some form of scam.

While that’s annoying, it’s not on you. Your account had nothing to do with it, and you have not been hacked.

The single most common way Facebook accounts get hacked is by successful phishing attacks. You receive a legitimate-looking email that leads you to sign in to your Facebook account — except it wasn’t legitimate, and what you’re signing into isn’t Facebook. It’s a fake site used to collect your sign-in information. The hackers can then use that information to compromise your account.

Can you get hacked by opening a Facebook message?

Changing your password on Facebook is the first thing you should do if you believe your account has been hacked. If successful, this will prevent the hackers from doing further damage. If you cannot change your password, then the hackers have already changed it themselves and you’ll need to attempt the Facebook account recovery process. 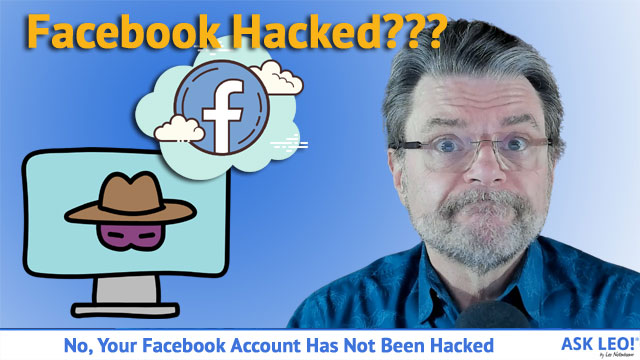