This actually started out as an article answering “What’s the best router?”,
followed by some specifics relating to the questioner’s situation.

What dawned on me is that we throw the word “router” around quite a lot, but
in fact, there are several kinds of routers that are used in several different
situations. They differ based on how you connect to the internet, what your ISP
actually provides, and how you connect your computers.

So rather than try and answer the unanswerable (what’s best?), let’s instead
take a look at the different kinds of routers that you’re likely to encounter
and when you might use each.

The most common kind of consumer grade router takes a network connection on
one side, presumed to connect somehow to the internet, and provides four or
more wired connections to which you would attach your computers.

The internet is delivered through a modem provided by your ISP, which is connected to a router that allows that single internet connection to be shared among multiple computers.

This type of router provides only wired, ethernet connections.

Because the configuration above is so common, many ISPs actually provide a
single device that combines a modem and a router:

In this case, the cable, fiber, or DSL line is connected directly to the
modem/router which then converts the incoming signal to ethernet and provides the router functionality to share that connection among multiple machines.

So far, all that we’ve discussed is wired routers – routers that only use ethernet
connections requiring a cable to connect to your computers.

Wireless capability, or more specifically WiFi can be added to such a wired network just by adding a
wireless access point (WAP):

Note that a wireless access point is not a router. It’s
simply a device connected to one of the wired router’s connections so that the
network can be extended wirelessly. The functions of a router are still
provided by the wired router on the network.

And, as you might expect, ISPs sometimes provide a single device that
combines the function of a modem, a router, and a wireless access point:

All of the previous scenarios are based on having a wired internet
connection to your home; typically either DSL, cable, or some kind of
fiber-optic connection.

Mobile wireless uses the cellular or mobile telephone network as an
alternative way to provide that connectivity:

Instead of paying a monthly fee to your wired ISP, you’d pay additional fees
to your mobile carrier.

Many mobile devices and even a few laptops already include the cellular
modem required to connect to a mobile data network, although these often will
work only with a specific carrier.

More commonly, laptops will use a USB modem or “dongle” purchased from your
cellular carrier of choice.

In this scenario, there’s no real router involved – the device is connected
directly to the internet using the cellular modem.

In recent years, the concept of a mobile wifi hotspot has evolved. These are
devices that turn that device into a portable wifi hotspot connected to a
cellular network. 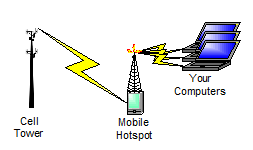 Conceptually, a mobile hotspot does nothing more than take a mobile
data connection on one side and make it available as a wifi hotspot on the
other.

Mobile hotspots typically come in two forms. Originally, a mobile hotspot was
a dedicated device – sometimes referred to as a “MiFi”. These are typically
smaller than a pack of playing cards and available from several mobile
carriers.

Of late, many smartphones now include the option to run an application that
turns the device into a mobile wifi hotspot. Which phones support this will
vary based on your mobile carrier.

A mobile wifi hotspot is a router.

More correctly, it’s a combined modem (to access the mobile network), access
point (to allow wifi-enabled devices to connect), and router (to manage sharing
of the connection among multiple devices).

Am I connected to a router?

Sometimes, it’s not obvious what device your ISP has given you. Assuming that you
have a computer connected and can access the internet, here’s a quick way to
tell.

Look up the
local IP address of your computer. If that IP address starts with 192.168.,
then you’re almost certainly behind a router as there are no legitimate
internet IP addresses in that range. (Less commonly, addresses that begin with
10. or with 172.16. through 172.31. also indicate that you are behind a
router.)

So, what do you need?

It starts with what your ISP has given you.

If all that they’ve given you is a modem, then you’ll definitely want to add some
kind of router. If you expect to use wireless, getting a combined wireless
router makes a lot of sense.

If what your ISP has given you is itself already a router, then you may be
done. If there’s no wireless support and you don’t need wireless, just connect
up your computers and go. If you do need wireless, then the easiest thing to do
is to get a wireless access point (not router) and connect that to the
router.

And of course, if the ISP gives you a combined modem/router/access point,
then you’re pretty much done – almost all of your connection options are covered.

If you travel and you take your computer(s) with you, a mobile wifi hotspot
can be a very valuable way to access the internet from wherever you might have
mobile coverage. Just keep an eye on the data plans and rates when you sign up
and as you use it.

In some infrequent cases, using a mobile wifi hotspot as your primary
internet connection can be appropriate, but typically, folks are disappointed by
the speed and it may even be against the carrier’s terms of service. Be sure
to check.

As I said earlier, this is really unanswerable. “Best” depends on many
things, including your ISP, your needs, your location, and in some cases, your
budget.

That being said, I’m a fan of Cisco’s consumer-grade equipment
(formerly known as LinkSys) and brands like Netgear and D-Link are typically
good. (I don’t mean to imply that there aren’t other good brands out there – these are simply ones that I’ve worked with personally.)

When it comes to mobile hotspots, you’re probably most constrained by your
choice of mobile carrier. I’ve been very happy with Verizon Wireless and often use my
Android-based smartphone as a mobile hotspot. I also have a pay-as-you-go
Virgin Mobile MiFi as a kind
of backup because internet connectivity is particularly important to me.

10 comments on “What Kind of Router Do I Need?”