Can a computer really do nothing? Yes and no. When it's doing nothing, it has to do something, and that something is the System Idle Process, waiting for something to do.

This is a great example of things we geeks take for granted that aren’t always obvious to the rest of the world.

I mean, really, a process regularly taking up 99% of your CPU’s resources must be a bad thing, right?

Nope, not at all. Just the opposite, in fact.

Let me show you what we’re talking about.

Right-click on the clock in the taskbar, and click on Task Manager.  Click on More details, if present, and then on the Details tab. Now click on the CPU column heading to sort by CPU Usage (click again to reverse the sort order if all you see are zeros in that column). Generally, you’ll see something like this:

Something called “System Idle Process” is taking up a full 95% of my CPU’s resources.

OK, so the CPU’s idle. Then why is the computer still slow? Why is My System Slow If the CPU Is Mostly Idle?

No such thing as doing nothing

Most computers never really do nothing. When the computer is powered on, the CPU is running, and it must do something even if “something” is waiting for something real to do.

Think of it as your computer twiddling its virtual thumbs, waiting for something more important to do. The computer is doing something — virtual thumb twiddling — but we wouldn’t call it doing anything useful.

“System Idle Process” is the software that runs when the computer has absolutely nothing better to do.

It has the lowest possible priority and uses as few resources as possible so that if anything at all comes along for the CPU to work on, it can. When there’s nothing left to do, back to idle it goes.

Having the System Idle Process use 95% of your CPU is a good thing. It means that 95% is readily available should there be any real work to do.

Can I end the system idle process?

No, you cannot end the system idle process. It’s the process run by Windows when there is nothing else to do. It does not take resources from your computer, but rather represents the amount of CPU resources available to other programs.

Why is my system idle process CPU so high?

When the System Idle Process is using a lot of CPU, it just means the computer isn’t working very hard. It represents the CPU that is available for other programs to use, instantly, when they need it.

Is System Idle Process a virus?

The System Idle Process is a core component of Windows, not a virus. 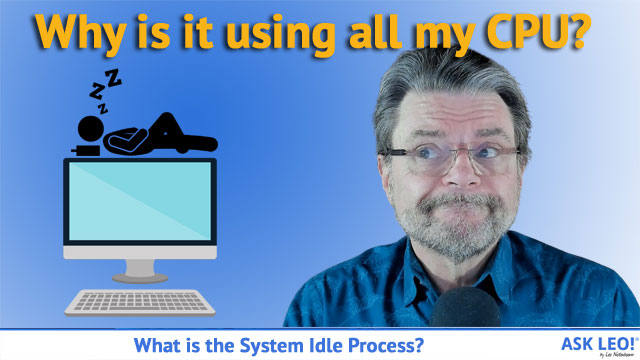 28 comments on “What is the System Idle Process and Why Is It Using Most of the CPU?”