Zetabytes? Petaflops? Gigahertz? Confusing terms for our computers' ever-increasing capacity and speed.
I feel like I’ve just crawled out from under a rock or something. Apparently, Seagate has come out with new drives with… zetabytes of storage? There are terabytes, which I know, this is how I store stuff, but now there are petabytes and zetabytes? In communications with someone at Seagate, they are telling me that the CIA has a computer with petaflops of processing power? I know what GHZ is, but what is a petaflop, or more importantly, how many gigahertz is a petaflop? Can you even buy this stuff? Or is this reserved for large companies. If you could clear some of this up, I would greatly appreciate it, thanks.

About the only unchanging thing in the computer industry is change itself. Today’s topic is storage: specifically, how much and what we call it.

That a byte is 8 bits (where a bit is either a zero or one) is pretty obscure to most, and honestly, not terribly important to general understanding.

Each multiple of 1024 has its own term. (This will get controversial, as we’ll see in a moment.)

Note that I have both a “common name” and “correct name” column.

Here’s the controversy: “common name” is the name we all tend to use. If you remember only one, remember this column.

At this writing, the largest drive I can find online for personal computer use is about 18TB (terabytes). That’s a traditional spinning media hard drive made by Seagate. The largest solid-state drive (SSD) is 8TB.

There will probably always be larger drives in development. But I’d be surprised if at this point they were more than 10 to 100 times bigger. I speculate, therefore, that the largest hard drives on the horizon are on the order of 100TB to 1PB, with SSDs in that same range or higher.

It’s worth noting that most data centers do not use the bleeding-edge largest drives available. They achieve their highest capacity by using more, smaller drives with a known track record — often many, many more.

But I’m not looking for zettabyte drives any time soon.

Of FLOPS and Hertz

Even though it’s unrelated to what I’ve been talking about so far — counting bytes — I want to address the other terms mentioned in the question: FLOPS and Hertz.

FLOPS and Hertz are different ways to measure how quickly a CPU performs its functions. What’s critical to understand is that they measure two different things.

A hertz is the speed of a computer’s clock — think of it as a simple pulse running at a particular speed that drives the CPU’s operation. A 1GHz computer has a clock running at 1 gigahertz, or 1 billion hertz. That pulse happens one billion times a second, so in theory, the computer can perform one billion operations a second. In practice, this isn’t exactly true: some operations take more than one “clock cycle”, while certain processor-specific optimizations can allow more than one operation to happen simultaneously.

The “petaflop” you mentioned simply means a quadrillion floating-point operations per second.

The design of different processors means that their ability to perform floating-point operations varies dramatically, even if they’re running at the same speed in gigahertz. For example, high-resolution graphics, especially those used in real-time virtual reality and video-intensive gaming, make heavy use of these types of operations. As a result, graphics cards often have processors designed for high FLOPS.

The net result is that there is no FLOPS-to-gigahertz conversion. They measure two different types of a computer’s speed.

You can read much, much more about FLOPS and floating-point operations in the FLOPS Wikipedia article. 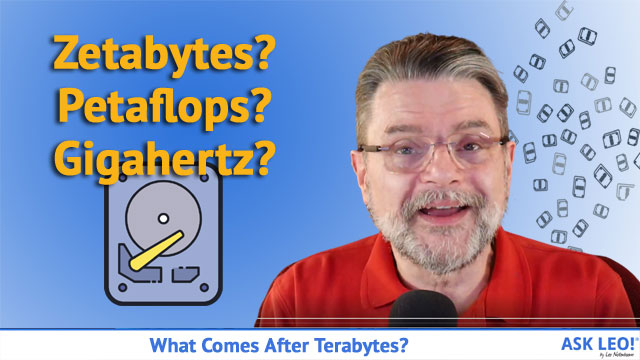 1: I have to say “usually”, at least for most Western languages, because there are multi-byte characters, such as emojis and foreign-language alphabets.

2: 32 versus 64 bit further complicates the comparisons, but that isn’t something I’ll deal with here.

2 comments on “What Comes After Terabytes?”