I get no sound from my computer no matter what. Device manager properties for my sound card says, “This device is working properly.” No, it’s not. It’s not working properly. What’s the deal?

The deal is, Device Manager lies.

Or, to cut it some slack, what’s “working” isn’t what you think, and clearly not the part that matters.

This part of Device Manager is decidedly unhelpful.

Device Manager regularly reports “This device is working properly”, even when devices are clearly not working. Device manager is reporting on the device driver, not the device. The driver may be functioning properly, even if the device is not. To diagnose the failure you’re experiencing, you need to look elsewhere.

First, we need to understand what Device Manager reports. That will tell us where not to look and where to look instead.

“This device is working properly”

The best way to think about Device Manager is that it’s not about devices, but device drivers.

Device drivers (or just “drivers”) are the software components that act as the interface, the go-between, between Windows and your hardware device. For example, Windows itself knows nothing about how to make your sound card play sound. All it knows is to ask the sound device’s driver to do it. That driver then knows exactly what bits to twiddle1 to get sound to come out of your computer.

Different sound cards require different kinds of bit twiddling to make sound, but Windows itself doesn’t need to know about it. As long as you have a device driver for that specific card, the card should work.

To be fair, Device Manager only reports what device drivers tell it. Device drivers determine what “working” and “not working” mean, and whether or not to report it back to Windows.

If you’ve ever seen Device Manager show a yellow exclamation point next to a device, that’s the driver telling Windows that something’s wrong. In those cases, “This device is working properly” in device properties will generally be replaced with diagnostic information of some sort. Exactly how clear and useful that is depends on the specific device driver.

Windows 10 is getting better at providing diagnostic help in the form of troubleshooters. I would start by seeing if there’s a troubleshooter for the problem you’re experiencing.

Here you’ll find an ever-growing list of tools to help diagnose and hopefully repair your problem. For example, if you’re having problems with sound, then the “Playing Audio” troubleshooter is where I’d start.

Troubleshooters often help resolve common issues, but they’re not perfect. They can only do so much.

One commonality is that device drivers may be involved in the process. Updating to the most recent — be it from Windows Update or directly from the device manufacturer — can be a useful diagnostic step. So can uninstalling device drivers, which forces Windows to reinstall them.

Both of those driver-related steps may involve Device Manager, and neither rely on Device Manager telling the truth when it says, “This device is working properly.” 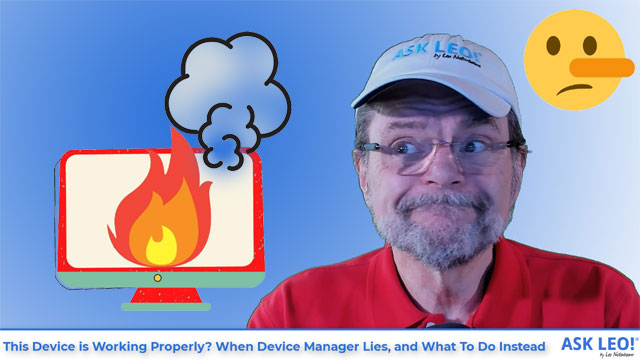 2: As displayed in the properties displayed when right-clicking the device in Device Manager and clicking on Properties.

6 comments on ““This Device Is Working Properly” – When Device Manager Lies, and What to Do Instead”